Protest silenced in Potemkin style for Poroshenko visit to Donbas 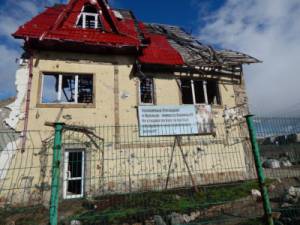 Considering the scandalous revelations about offshore machinations in the Ukrainian and world media, the removal of a placard in advance of Ukrainian President Petro Poroshenko’s visit to Donbas last year may seem very trivial.  It won’t make world headlines, but the local residents reminding Ukraine’s President and Prime Minister about unfulfilled promises had a right to be heard.  The placard reading: “Dear Mr President and Prime Minister!!!  Are you not ashamed of your empty promises about rebuilding housing” was pasted on buildings nearly destroyed by shellfire during the military conflict in 2014.   The area has been safely under Ukrainian government control since July 2014, yet almost 2 years later, the buildings remain untouched.

According to Oleksandr Pavlichenko, Kharkiv Human Rights Group Deputy Director, a KHPG monitoring group came upon the vanishing placards quite by chance.  They first photographed the placard from a road leading out of Sloviansk on Oct 4, 2015.  By then Ukraine’s leaders had had over a year to make good their promises given after Russian Igor Girkin and his Kremlin-backed militants fled from Sloviansk in July 2014.  The state of the building makes the motives of those who posted the question all too clear.

That, however, is only one of the problems.  Pavlichenko explains that another  KHPG monitoring visit began on March 28, the same day that the President was due to visit the area.  The monitors noticed that the placard had gone, but thought little of it until, returning on April 2, it was back in its same place.

Suspecting that the disappearance was linked with Poroshenko’s visit, they asked around and found witnesses who said that the placard had been removed by men armed with automatic rifles.

Clearly somebody had decided that the President should be protected from an uncomfortable reminder of a vital problem not kept.

Pavlichenko is appalled by such a return to the worst Soviet standards and points out that such behaviour is an undoubted violation of the European Convention on Human Rights and Ukraine’s Constitution, both of which guarantee freedom of expression.

It is particularly frustrating that in Donbas, where people have been through so much, the questions should be muffled and problems not resolved.

Girkin, the Russian former military intelligence officer who played a major role in both Russia’s invasion of Crimea and the conflict in Donbas, has admitted to carrying out extrajudicial executions while in control of Sloviansk.  After the militants fled, at least one mass grave was uncovered, as well as documents about such executions.  Unfortunately Ukraine’s authorities are also doing little to investigate the executions, abductions and other war crimes.