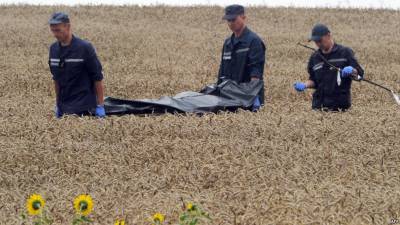 Ukrainian rescue workers carry the body of one of the 298 victims on a stretcher through a wheat field at the site of the MH17 crash on July 19, 2014.

NIEUWEGEIN, The Netherlands -- An international criminal investigation into the MH17 tragedy in eastern Ukraine in 2014 has determined the Malaysian Airlines passenger jet was shot down by a Buk antiaircraft missile fired from separatist controlled territory in Ukraine.

The Joint Investigation Team (JIT) further determined that the missile system was brought into Ukraine from Russia shortly before the tragedy and then smuggled back to Russia shortly afterward.

Presenting the JIT’s interim findings on September 28, the team’s head, Fred Westerbeke, said the investigation had ruled out all other possible explanations for MH17’s crash, which killed all 298 people on board.

Westerbeke, who is also the Netherlands’ chief prosecutor, added that the JIT could not currently reveal all of its findings for fear of hampering its criminal investigations. However, the investigation has identified about 100 people who are being looked at further.

Westerbeke said it is unknown how long the JIT investigation will continue or when it will be completed. He added that he thinks there is a “realistic chance” that those responsible for the tragedy will be prosecuted, although the venue for such a prosecution remains undetermined.

Malaysia Airlines Flight 17 was shot down on July 17, 2014, over Ukrainian airspace while flying from Amsterdam to Kuala Lumpur. All 298 passengers and crew on board perished.

"On basis of the criminal investigation, we can conclude that Flight MH17 was downed on July 17, 2014, by a rocket of the 9-M-83-38 series, fired from a Buk trailer, and that this Buk trailer came from the territory of the Russian Federation and returned to the territory of the Russian Federation after the launch, ” Wilbert Pualissen, the head of the Dutch police investigation, told the press conference.

The JIT showed an elaborate 10-minute animation interlaced with photographs and videos taken in July 2014 that showed the Buk system being brought into Ukraine and arriving near the town of Snizhne. It further presented audio and photographic evidence that a missile was launched. Then the same Buk unit, with only three missiles, was traced moving by night back through the Ukrainian city of Luhansk and into Russia.

An earlier report by the Dutch Safety Board, a separate agency, also concluded that MH17 was downed by a Buk fired from separatist-controlled territory.

Hans de Borst, who lost his 17-year-old daughter Elsemiek in the MH17 tragedy, told journalists in Nieuwegein ahead of the JIT presentation on September 28 that he was confident in the team’s findings.

"All kinds of proof. Telephone taps, even new raw material, radars. American information, classified information which they’re not allowed to bring in the open here. Witnesses... all kinds, " he said. "So I have a lot of faith in this."

“All other possible causes of this horrible tragedy were considered and rejected during the course of the criminal investigation, ” the Foreign Ministry said in a statement. “This puts an end to all of Russia’s attempts to discredit activities of the Joint Investigation Team and conclusions by spreading distorted or fabricated information.”

In Moscow, Russian Foreign Ministry spokeswoman Maria Zakharova told a news conference that the probe’s findings showed that it was “biased and politically motivated."

“Arbitrarily assigning blame and dreaming up the desired results has become the norm for our Western colleagues, ” Zakharova said.

Ahead of the report’s release, Russia tried to offer other explanations. On September 26, the Russian Defense Ministry released what it claimed was new radar evidence showing the jet was downed by a missile shot from territory held by Ukrainian troops. This claim contradicted Moscow’s previous assertion that it had radar evidence showing that a Ukrainian Air Force fighter jet was to blame.

A representative of the self-proclaimed separatist organization in Donetsk, Eduard Basurin, told Interfax that his forces had "no such air-defense systems" and could not have downed MH17.

In July 2015, Russia used its UN Security Council veto to block a resolution aimed at creating an international MH17 tribunal, saying that doing so would be “counterproductive.”

Shortly before the JIT press conference, Russian presidential spokesman Dmitry Peskov told journalists in Moscow that the international investigation must take the “latest information” into account.

“The data are unambiguous, ” Peskov said. “If there had been a missile, then it could have been launched from other territory.”

A JIT official said Russia had not provided this information to its investigators and it had not been evaluated. Westerbeke said the JIT had made “several requests” for information from the Russian government during its two-year investigation and had received “partial answers to some of them.”

In July 2015, Russia used its UN Security Council veto to block a resolution aimed at creating an international MH17 tribunal, saying that doing so would be “counterproductive.”

The JIT includes representatives of the countries most affected by the tragedy -- the Netherlands, Australia, Malaysia, and Belgium working in cooperation with Ukraine. Its purpose is to develop evidence that could be used in criminal prosecutions in any of those countries.

In Washington, the U.S. State Department said the findings corroborated U.S. conclusions made just days after the jet crashed.

"This announcement is another step toward bringing to justice those responsible for this outrageous attack, " State Department spokesman John Kirby said in a statement.

The JIT has been working with the British-based open-source research group Bellingcat, which has used social media posts to track the movement of a Buk missile unit from near the Russian city of Kursk to the Ukrainian village of Snizhne in the days before the MH17 downing and to track the same units return to Russia immediately afterward.

"Obviously, the Russians are doing everything they can to undermine this press conference, " Bellingcat founder and director Eliot Higgins told RFE/RL in Nieuwegein on September 28. "They released this radar data. You know, it was ridiculous really because they managed to prove that their previous press conference was a lie.

"In the first press conference, [the Russians] said there was a jet three to five kilometers away, and in the recent one they said there was nothing anyway near it. So, you know, the Russians are going to try very hard to not to admit responsibility for this."

With reporting by The Guardian, Interfax, TASS, and the BBC