Politicians jeopardize role of main human rights body in UkraineA resident of Mariupol is telling how she found civilians killed by a sniperRussia sends relatives of Ukrainian soldiers and other Mariupol residents to ‘concentration camp’ in occupied DonbasOn documenting international crimes committed by the Russian occupiersHUMANITARIAN MANIFESTO‘International institutions must protect Ukrainians from abductions and executions’, Ukrainian SCOsMass beating in Colony No.25: buried investigation?Report concerning the investigation of the mass unlawful use of force to the convicts of the Oleksiivska correctional colony (No.25) on January 8, 2020 Reform strategy of medical care for prisoners (updated)After two acquittals, Russia finds more compliant judges to pass 15-year sentence against historian of the Terror Yury DmitrievЗаява про неприпустимість маркування екологічних активістів екотерористамиCrimean Solidarity Coordinator jailed amid international demands that Russia end its persecution of Crimean Tatars The Security Service Bill is a direct threat to democracy and the rule of law in UkraineUkraine seizes alleged "chief butcher" from notorious Izolyatsia ‘concentration camp’ in occupied Donetsk Russia vandalizes and plunders UNESCO World Heritage site at Chersonese in occupied CrimeaRussia claims its attack on Ukraine and seizure of 24 seamen are not the UN Tribunal"s businessRussian Supreme Court refuses to review horrific sentence against historian of the Soviet Terror Yury Dmitriev despite glaring violations Nine former hostages to testify against ex-militant over torture at Donetsk Izolyatsia secret prisonLast chance for Russian court to end persecution of historian of the Terror Yury Dmitriev What is next?
• Topics / Human rights protection 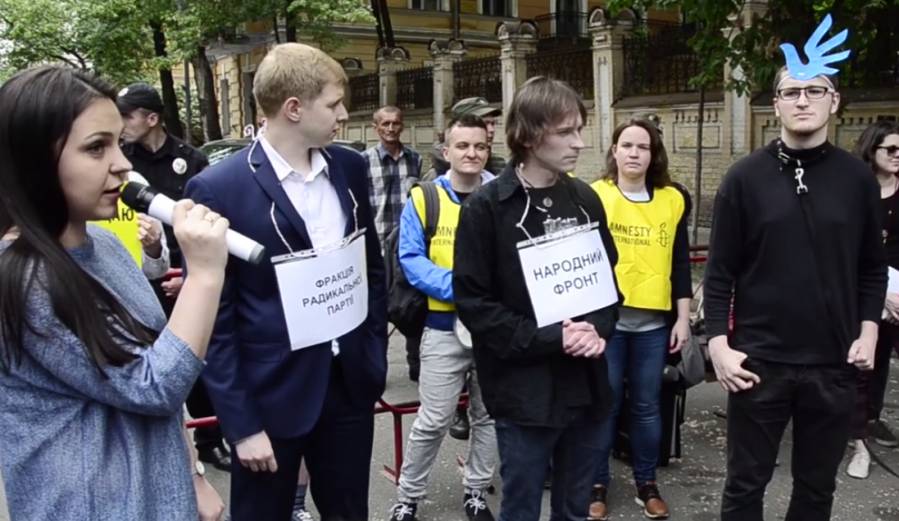 Ukraine’s legislators failed last week to undermine the vital post of Parliamentary Commissioner on Human Rights (Ombudsman), though not for want of trying.  Civic organizations have again demanded that a proper competition be held, with a previously forgotten detail about the role of the Ombudsperson highlighting potentially disastrous ramifications for judicial reform if politicians choose according to party quotas.

As reported, Valeria Lutkovska’s term in office ended on April 28 and a new Human Rights Ombudsman must now be chosen (or Lutkovska reappointed).  Back in January this year, Ukrainian human rights groups first drew attention to the need for a proper competition in compliance with the UN Paris Principles.  Although it is the Verkhovna Rada’s MPs that elect the Commissioner, both the Paris Principles and Ukraine’s Law on the Human Rights Ombudsman make it quite clear that the holder of this post should be independent and represent all parts of Ukrainian society.

By May, it had become clear that parliamentarians were choosing ‘their own’ candidates on party lines, with two of the three candidates proposed being current MPs.   Serhiy Alexeev is a member of the Bloc of Petro Poroshenko and Ludmila Denisova – an MP from the People’s Front.  Oleh Lyashko, leader of the Radical Party, suggested a third candidate -  Andriy Mamalyta.

While the Law clearly prohibits the Ombudsman from being an MP or holding executive office at the same time, a current legislator can be elected to the post.

Calls for a proper competition from the Human Rights Agenda, a coalition of different human rights NGOs, and the Rehabilitation Package of Reforms [RPR] were backed by appeals from 40 Ombudsmen, Freedom House and others.

All stressed the need for the person to be independent and the inadmissibility of parliamentarians treating this post as part of their political quota within the coalition.

It had looked as though all calls were going to be ignored with Denisova widely expected to ‘be elected’ on June 6.

That vote did not take place, officially because the National Agency on Preventing Corruption had not finished its special checks.  The unofficial explanation is that Denisova did not have enough votes to win.

The reason certainly needed to be more compelling than the lack of documents from the National Agency, since the Law stipulates that a candidate must be chosen within 20 days.  That term ended on June 6.

The RPR platform has pointed to the fact that time has run out, and has called for a new 20-day term with a reset for the entire selection procedure, this time bringing it into line with the Paris Principles.

On June 12, the Human Rights Agenda’s members, including KHPG, reiterated the importance of candidates being independent and meeting the professional and ethical requirements of the post.  This, they stressed, can only be achieved via an open competition with representatives of civil society able to stand for election.

They welcome the decision by the Parliament Committee on Human Rights to recommend that a committee be set up on nominating candidates with this including members of the public.  Following this move, they call on Parliamentary Speaker Andriy Parubiy to hold a meeting with human rights groups, and to create a consultative competition commission or a committee on nominating candidates, with the participation of human rights organizations.

By ignoring these calls, parliament will be in direct breach of the Law on the Ombudsman and will be flouting the 1993 Paris Principles which stress that candidates “ shall be established in accordance with a procedure which affords all necessary guarantees to ensure the pluralist representation of the social forces (of civilian society) involved in the protection and promotion of human rights… “

Mykhailo Zhernaikov, RPR’s senior legal expert, has drawn attention to a part of the Ombudsman’s scope which we ignore at our cost.  According to the Law on the Judicial System and Status of Judges, the Ombudsman is empowered to appoint two members of the High Qualification Commission of Judges.  All eyes have been on the work of this Commission in recent weeks during the competition to appoint new judges to the Supreme Court.  It is this Commission which has been suspected of bias over its interviews with certain candidates, and the fact that it has overridden negative assessments from the Public Integrity Council based on very real concerns about the past record of the judges in question.

This commission will be responsible for the selection of thousands of judges in the coming years and it is imperative that all its members should be chosen according to proper criteria.  An Ombudsperson – politician, especially one appointed according to party quotas will mean that any decision on members of the Commission will be based on political interests, not objective criteria.

The Ombudsman has wide powers and really is the last avenue for ordinary citizens to approach when their rights are violated.  It should therefore not need to be spelled out that the person must not be viewed as politically engaged, and the selection criteria cannot be topped by the candidate’s political affiliation.