Miners protesting over pay arrears arrested and tortured in Russian-controlled Luhansk ‘republic’Donbas miners charged with ‘treason’ for going on strikeAkhmetov’s miners go on strikeMiners forced to begin major protest – for their wagesLuhansk miners protest over huge wage arrearsMoney for drinking water used for officials’ mineral water?Donbas Miners: Neither decent working conditions, nor a normal burialYet more miners die in Ukraine’s minesUkraine’s Mines remain deadlyMiner who complained of inhuman conditions after mine disaster “transferred”Ukraine’s Miners: Put at Risk and ExploitedRefined torment of minersReformers of the Mining Industry – Miners’ Opinion not needed?Kuzbass Miners defend their Right to LifeWhy are miners dying?Ukrainian-German projects on miner safety suspendedWere miners left to die after the explosion at the “Zakhidna” Mine?Wages arrears for miners have increased by 470%The Price of Zasyadko’s “gold” or Money above lifeEvery fifth industrial death is that of a miner
• Topics / Social and economic rights 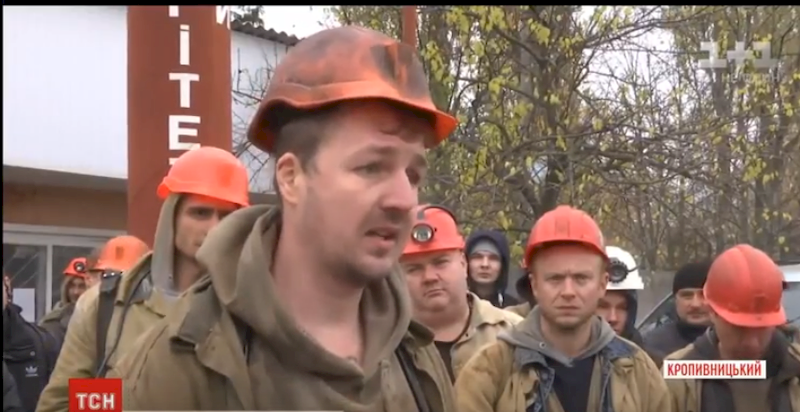 94 miners from the Ingulska uranium mine (near Kropyvnytsky) have been taken to court by the mine administration after they stayed underground at the end of their shift in protest over pay and conditions.  If the court allows the enterprise’s request to call this an illegal strike, the men could face a massive fine.  The men themselves, and the Ukrainian Independent Trade Union of Mineworkers (NGPU) believe that the move is aimed at crushing those willing to speak out now and frightening others from trying such protests in the future.

The Ingulska Mine is part of a state enterprise [СхідГЗК].  Together with two other mines in the Kirovohrad oblast, it provides most of the uranium needed in Ukraine’s nuclear industry.   The state enterprise has recently been in the news over a major corruption investigation carried out by the National Anti-Corruption Bureau [NABU].

The men were on the night shift and refused to come to the surface in the morning of November 7.  This cannot be called a strike, they and NGPU stress, as they had worked their shift to the end. They also did not stop the morning shift from beginning, and assert that this was a decision taken by the mine’s administration.

Valery Melnyk, one of the miners and head of a youth trade union, told local reporters that, while salaries on average in Ukraine had risen by 140% since 2014, they had only seen a 70% increase since then [against a sharp fall in the value of the hryvnia, and increase in all prices].  The main reason for their protest, he said, was that the administration was not keeping its word.  They had promised to raise the men’s salaries back in October, but were saying they would have to wait until March.

Vasyl Bondar, a driller and head of a brigade at the mine, told the local newspaper Hrechka that they were demanding a 50% rise from October, and the same again from March, 2018.  Their last supposed pay rise – of 15% - had been in March, he said, but the employers had removed all supplementary payments, which cancelled out any increase.   They had tried to go through their union, he added, but the promises to increase their pay back in April had not been kept.  Instead of the promised increase (which he says was from September), they lost their bonuses in both September and October.

The men spent over 24 hours underground, demanding a 50% increase in their salaries and improvement in working conditions.  The administration made some concessions – increasing wages by 25% from November, and promising a 40% increase from March 2018.

At the same time, it lodged a suit against the 96 men, asking the court to recognize the protest an illegal strike and to force the men to compensate the alleged losses in income.  The figure demanded is massive (1 million, 468 thousand UAH), the law suit unprecedented.

Dmytro Bondarev, the head of the Ingulska branch of NGPU, denies that this was an illegal strike.  They call it a spontaneous protest, he says, and adds that the conflict had been brewing for some time.  They kept receiving promises of pay rises that were not kept, and were being forced to work on very old technology that kept breaking down.  The assurances that the equipment will be modernized have also not resulted in any action.

The miners are fully supported and represented in court by NGPU who stressed that the bonuses withheld were a part of the miners’ income.  These had been made contingent on the quality of ore, although it is not the miners who decide where to obtain it.

Ingulska Director, Ravil Ahliulin complained to Ukrainska Pravda about the miners, saying he couldn’t understand why they were protesting.  However, while citing supposed benefits they enjoy, he did largely confirm the excuses the miners themselves say they keep hearing.  He said, for example, that they are no exception, everybody in Ukraine is three times poorer, and it bad, and that the government has not invested in the industry for the last 8-10 years.  They have to make enough to finance themselves, yet the cost of producing one kilogram of the uranium ore is 30-40 dollars more than the current world price for such ore.

Christopher Ford, a Briton who has been cooperating with and assisting the miners’ unions, has visited various mines in Ukraine, and says he is struck by how much worse the situation is in state enterprises, as opposed to privately-owned mines.  Simply getting paid on time (or at all) is a chronic problem.  He believes that there is a deliberate running down of the state-owned mining industry.  Ahliulin did tell Ukrainska Pravda that the enterprise is surviving mainly because they have long-standing contracts.

In the meantime, miners continue to work with technology which is not being upgraded, in conditions which are hazardous to their health.  For this they receive wages that may be higher than the national average, but that are clearly not keeping up with rampant inflation and general pay-rises.

94 of them felt strongly enough about the constant delays in any increase to hold a protest underground.  Their protest, ironically, did have a positive effect in that there was a general increase in wages.  That rise was felt even by the administration who have now lodged a law suit which could end in the men facing crippling fines.  The miners dispute the claim that the mine suffered these losses, saying that they understand that the mine had met its production plan the previous month.

Oleksandr Shershnve is a mining engineer with two higher educations, working in the mine for 8 thousand UAH a month.   Like his colleagues and the Independent Mineworkers’ Union he is in no doubt that this law suit is aimed solely at crushing protest now and in the future.

“This is a means of putting pressure on workers. So that we and the next generation to come to the mine are frightened to fight for our rights.  They want this court case to serve as a vivid example to all”.

The court hearing into the suit is scheduled for January 18, 2018.