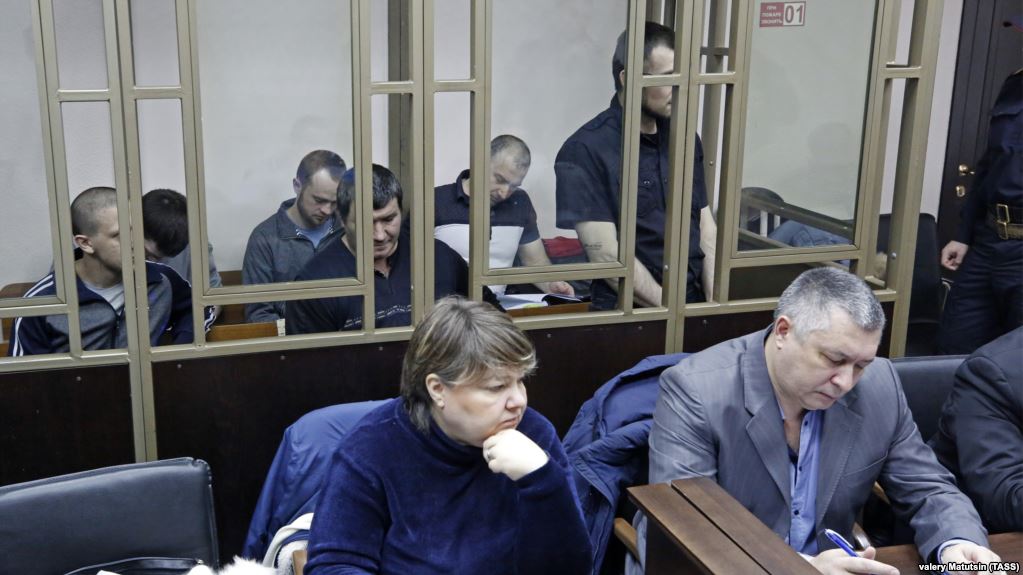 Russia has responded to Ukraine’s expulsion of 13 diplomats with nominal symmetry, but brutal precision, targeting both Moscow and the consulate in Rostov where many of Russia’s politically-motivated trials of Ukrainians are held.  Rostov also borders areas of Donbas under Kremlin-backed militant control, and Russia would doubtless prefer as few Ukrainian eyes as possible monitoring its regular flow of fighters, military equipment and arms across the border.

In commenting on the expulsions, Iryna Herashchenko, the President’s Humanitarian Envoy to the Minsk negotiations, wrote that the families of several political prisoners had already contacted her, anxious that consular support for the prisoners might be affected.  She is adamant that the consular staff will continue to be present at all hearings and visit the men, and also promises that a department for providing support to the families of political prisoners within the Ministry for Occupied Territories will shortly begin functioning.  Not all are so upbeat about the likelihood of this happening in the near future, however there is at least movement in that direction, and a draft bill has just been tabled in parliament.

Ukraine was among 20 countries to expel diplomats in solidarity with the United Kingdom following the poisoning with a Russian nerve gas of Sergey Skripal and his daughter.  Since Russia is not only trying to claim that Britain was behind the poisoning, but is also loudly asserting its ‘right’ to visit Yulia Skripal who has gained consciousness, it is worth noting Herashchenko’s comparison of Ukrainian and Russian consular support.  While Ukrainian diplomats attend all political trials and visit Ukrainians in detention,  the Russian consul in Ukraine has visited Russian military serviceman Viktor Ageyev once, and has not been to see some of the Russians in Ukrainian detention at all.

Britain would do well to consider Ukraine’s experience.  In May 2015, two Russian military intelligence spetsnaz officers were arrested during an attack on the Ukrainian army in the Luhansk oblast.  Both men on multiple occasions told the OSCE, Russian journalists, human rights defenders and others that they were currently serving officers.  They were effectively blocked only by the Russian side from having any contact with their families, and Ukraine did not prevent the Russian consul from visiting them.  Over the following months, first one and then both changed their story, to that presented by the Russian defence ministry (namely that the men had ‘resigned’ from the military and gone to Donbas as ‘volunteers’).  They were later exchanged for Ukrainian political prisoner Nadiya Savchenko.  Much the same metamorphosis took place with Ageyev, although both he and his mother had repeatedly confirmed that he was a contract soldier in the Russian army.

There are now at least 65 Ukrainians held prisoner illegally in occupied Crimea or Russia.  Many of the ‘trials’ of Crimeans have been held at a military court in Rostov on the Don, including that of Ukrainian filmmaker Oleg Sentsov and civic activist Oleksandr Kolchenko.

The no less flawed ‘trial’ of Crimean Tatar human rights activist Emir-Usein Kuku and five other Crimean Muslims is currently underway at this same court.  All six men have been declared political prisoners by the renowned Memorial Human Rights Centre, and Kuku is an Amnesty International prisoner of conscience.

The six men are facing unproven charges of involvement in Hizb ut-Tahrir, a peaceful pan-Islamist organization which is legal in Ukraine.  They have all been imprisoned for two years solely for their faith and, in some cases at least, either because of their civic position or out of revenge for their refusal to collaborate with Russia’s FSB.

In declaring the men political prisoners, Memorial HRC points both to the fact that Russia is illegally occupying Crimea and has no right to apply its legislation, and the grossly fabricated nature of the charges.

Russia is also flagrantly violating a recent European Court of Human Rights judgement, as well as its own legislation, and holding Ukrainians thousands of kilometres from their homes.  The cases of Sentsov and Kolchenko are especially cynical since Russia has consistently refused to allow the Ukrainian consul to visit them, claiming that these Crimean Ukrainians had ‘automatically become Russian citizens’.