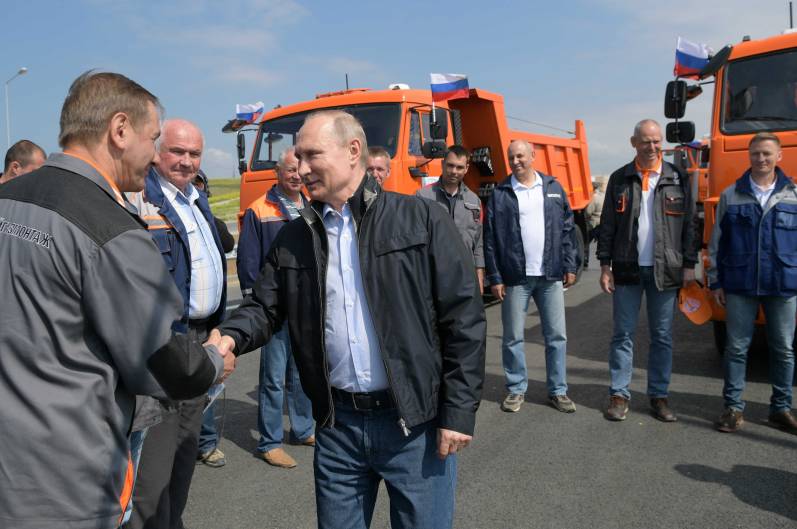 Russian President Vladimir Putin (R, front) greets builders before a ceremony opening a bridge, which was constructed to connect the Russian mainland with the Crimean Peninsula, near the Taman Peninsula in Krasnodar Region, Russia May 15, 2018. Sputnik/Alexei Druzhinin/Kremlin via REUTERS

Russia’s war in Ukraine has entered its fifth year. Skirmishes and killings continue every week but have faded from the headlines—perhaps because they have reached “an acceptable level of violence.”

I was a teenager when I first heard that chilling term uttered by a British politician in 1971 referring to the low intensity war in Northern Ireland between the British government and IRA terrorists. The conflict had erupted in 1968 and would last for thirty years with a steady stream of bombings and shootings leaving a trail of dead and maimed.

But, apart from occasional spectacular attacks that killed and wounded dozens of victims, the violence seemed to barely register with Britons on the mainland. Many in Northern Ireland understandably felt forgotten as if the rest of the world had become bored with their ghastly situation.

It was Home Secretary Reginald Maudling who declared the conflict was at “an acceptable level of violence,” which many took to mean that London had given up and was resigned to keeping it within reasonable parameters.

The Russians annexed Crimea in March 2014 and by spring had stirred up violence in parts of eastern Ukraine as a precursor to snatching more Ukrainian territory. Soon fighting flared with large battles, which sometimes saw hundreds dead in a day.

The conflict has taken more than 10,000 lives—most civilians—including 298 passengers on Malaysia Airlines Flight 17, shot down over eastern Ukraine on July 17, 2014. All the evidence pointed to Russia but Moscow lied indignantly and denied involvement. But this month a report compiled by independent international investigators confirmed the ill-fated airliner was blasted out of the sky by a Russian military unit.

By the autumn of 2015 a ceasefire agreement depressed the death rate dramatically. Ukrainian soldiers and civilians still died every week, but they died in dribs and drabs. Press attention shifted to the mass slaughter in Syria and many Ukrainians felt their country’s plight had been consigned to the back burner, much like those in Northern Ireland.
So it was fitting that Russian President Vladimir Putin, who shattered the postwar world order by sparking war in Ukraine, opened a bridge connecting Russia with occupied Crimea on May 15.

Putin inaugurated the bridge, hailed as Europe’s longest, by driving the first vehicle to make the nineteen kilometer journey from Russia across the Azov Sea’s Kerch Strait.

However, as he purposefully shifted gears, it must have been difficult for him to maintain a smile when he considered that the bridge, far from being a monument to martial triumph, is a stark symbol of the Kremlin’s failed plans to rebuild a new Russian empire.

After seizing Crimea, Putin failed to snatch a huge crescent of Ukraine, which would have created a land corridor from Russia to Crimea, enabling Moscow to easily supply the necessities Crimea received from the Ukrainian mainland that were transported by road and rail.

But that didn’t happen because, to Moscow’s astonishment, vastly outnumbered Ukrainian volunteer battalions held back pro-Russian forces and limited them to occupying a portion of the country’s eastern Donbas region.

A bridge to keep Crimea going became necessary as everything had to be expensively brought in by ferry or plane from Russia sending the cost of living soaring for those on the peninsula. Tourism, once a vital slice of Crimea’s economy, crashed.

The bridge became an obsession for Putin who devoted billions to the project and called the structure “a miracle” when it was completed. A previous bridge in the same place collapsed decades ago because the seabed does not anchor structures well and the weather is often bad. Some say that the combination of corruption, lax engineering, and rushed work will make it a miracle if the structure endures.

The European Union, United States, Canada, and many others condemned the bridge as an attempt to tighten Moscow’s illegal occupation.

Despite the hoopla surrounding its “opening,” the bridge isn’t very useful as the roads leading up to it on both the Russian side and in Crimea won’t be ready until at least 2019. Ukraine’s Foreign Minister, Pavlo Klimkin, rightly tweeted: “Both ends of the bridge lead nowhere.”

In similar fashion the Minsk Agreement, intended to bring peace to eastern Ukraine, isn’t going anywhere either. It calls for not only a ceasefire but also for the withdrawal of Russian troops and pro-Moscow forces from the occupied areas, return of control of all its borders to Ukraine, and elections for a political arrangement in the region that reflects the interests of the local population, many of whom are ethnic Russians.

There has only been one day without fighting since it was signed in 2015 and the rest of its provisions have stalled because Moscow’s armed forces—whether regular or Kremlin-armed proxies—remain in the occupied Donbas area and control the Russian-Ukrainian border.

Earlier this month Kurt Volker, the US special envoy charged with trying to settle the conflict, spoke at a US Senate briefing. He was not optimistic. He hasn’t heard from his Russian counterpart, Vladislav Surkov, for more than three months since floating a plan to bring in UN-mandated peacekeepers to control both sides of the conflict line.

Volker said he has not seen any signs that Moscow is willing to engage “seriously” to resolve the conflict despite the fact it has nothing to gain from continuing it.

Meanwhile, the violence continues with observers reporting a spike in attacks by Russia. Another two Ukrainian soldiers were killed and four wounded last week. Not “acceptable” for Ukrainians, or anyone else.