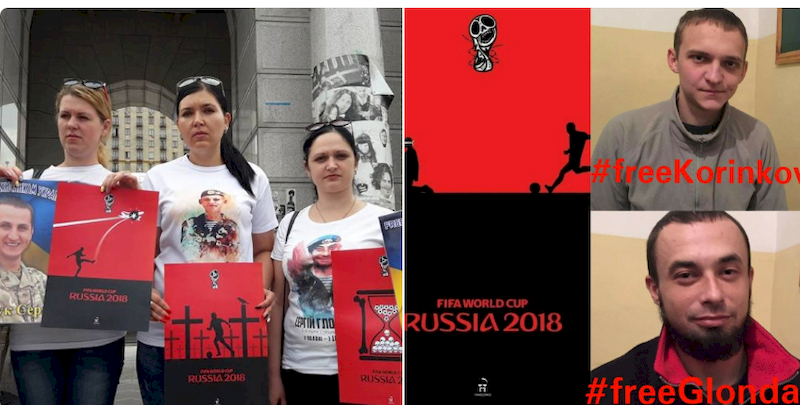 Among the many Ukrainians for whom Russia’s hosting of the 2018 World Cup seems a bitter mockery are the families of Ukrainian soldiers held prisoner by the Russian-backed militants in Donbas.  The wives of several prisoners gathered in the centre of Kyiv on 17 June to ‘show the red card to Russian President Vladimir Putin’ – with their cards containing the stark images by artist Andriy Yermolenko depicting a World Cup “soaked in the blood” of Russian aggression against Ukraine, in Syria and elsewhere.

Those present included the wives of Serhiy Glondar and Oleksandr Korinkov, two spetsnaz officers captured over three years ago in a battle that demonstrated Putin’s open duplicity and Russia’s direct military engagement in Ukraine.

Glondar and Korinkov were taken prisoner in February 2015, just days after Putin agreed a ceasefire with the leaders of Ukraine, France and Germany as part of the Minsk II Accord.  Not only was the ceasefire delayed by four days, but it was clearly never intended to include Debaltseve, a government-controlled strategic railway hub which was under attack.

While it was officially the Kremlin-backed militants of the self-proclaimed ‘Donetsk people’s republic’ who refused to honour the ceasefire, investigative journalists from the Conflict Intelligence Team concluded back in February 2016 that Putin was responsible for “the decision to attack Debaltseve and close a pocket around Ukrainian forces”.

Confirmation of Russian military involvement can be seen in the military award given to a Russian soldier Alexander Minakov whose “services to the Fatherland” could only have been at Debaltseve, from the interview to Novaya Gazeta by a badly burned tankman Dorzhi  Batomunkuev, from the Bellingcat report «How These Adorable Puppies Exposed Russian Involvement in Ukraine» and a Vice News documentary «Selfie Soldiers: Russia Checks in to Ukraine«.

Such detective work has been made necessary by Russia’s stubborn denial of its involvement, which has in fact long been recognized by military experts, such as Igor Sutyagin.  His report for the UK-based Royal United Services Institute on Russian Forces in Ukraine gives a detailed assessment of which forces were deployed in February 2015.

On February 16, 2015 Glondar and Korinkov were seized while accompanying seven other Ukrainian soldiers retreating from Debaltseve.  There had originally been nine men who came under Russian / pro-Russian militant fire.  Two men were killed, and another two seriously wounded.  The latter were released soon after the group was captured.  Another two were handed over after 50 days, and one managed to escape.

Korinkov and Glondar have remained imprisoned ever since, passed over even during the major exchange of prisoners on 27 December 2017.  It is clear that the two officers are viewed as ‘trophies’, for whom Russia and its proxies want a high ‘price’.

Glondar’s wife Yekaterina learned that she was expecting the couple’s second child the day that her husband was taken prisoner.  Little Anya is now almost three and has never seen her father.  The last telephone call was back in June 2016, and letters are also very rare.

The men are being held in appallingly overcrowded conditions. Nils Melzer, UN Special Rapporteur on torture, was recently able to visit at least some of the prisoners held by the militants, but complained of the serious restrictions placed on him and the fact that he was prevented from speaking to the prisoners alone.

The separation and waiting are hard not only for the wives, but for older children who desperately miss their fathers.  Viktoria Ivanchuk says that her younger daughter sometimes puts aside a piece of sweets she has received – for Papa when he comes home.

Serhiy Ivanchuk is also a military man – the head of an engineering unit.  He was seized by militants of the self-proclaimed ‘Luhansk people’s republic’ [LPR], together with Ivan Deyev on February 11, 2017.  Their whereabouts were not known until March 10 when the militants claimed to have arrested men who had been planning multiple terrorist attacks against civilians in the Luhansk oblast, in cities of Crimea and the Russian Federation.

As always, the allegations were based solely on videoed ‘confessions’.  Ivanchuk appeared on the video showing very clear signs of beating and ‘admitted’ to involvement in the violent deaths of two militants, one of whom had been killed after Ivanchuk and Deyev were taken prisoner.  Viktoria Ivanchuk says that she scarcely recognized her husband on the video. What was most frightening, she adds, was that he appeared unable to move his left hand. An expert later assessed Serhiy’s ‘confession’, pointing to places where he had obviously forgotten his lines.  He does not speak confidently in Russia, and it was clear that he was reading out something learned by heart.  She has since learned from prisoners who were released in December that all the men were handed texts and told to learn it so that they spoke without hesitation.

While Ivan Deyev seemed less obviously beaten up, he did appear dazed, and had  possibly been fed some kind of psychotropic drugs (more details here).

Viktoria Ivanchuk has learned from the hostages freed in December last year that her husband is being held in solitary confinement.  She is aware only that Deyev is also held in the same LPR basement prison.  She herself has not had any telephone contact with him, nor has she received any letters.

There are at least 103 Ukrainians held prisoner by the Kremlin-backed ‘republics’ in Donbas, as well as over 70 political prisoners held in Russia and occupied Crimea.