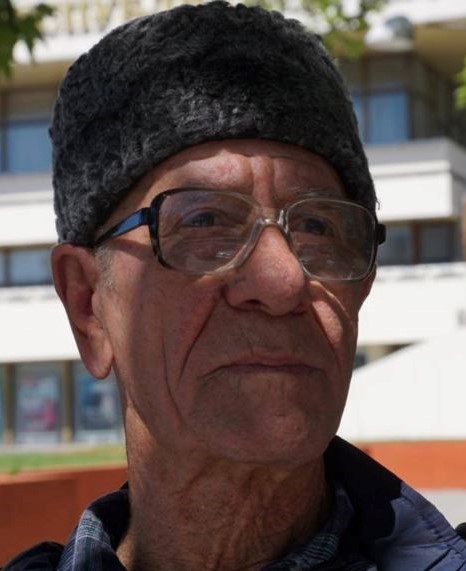 Server Karametov, veteran of the Crimean Tatar national movement, unwavering defender of all victims of political persecution under Russian occupation and himself a prisoner of conscience, has died in hospital after being hit by a car in Stary Krym.

No details are available of the accident but the stark photo posted shortly afterwards make it clear that both 76-year-old Server Karametov and Enver Arabadzhiyev were critically injured.

“You can’t sit at home”, Server Karametov would repeat, and he certainly never looked away as his people were facing persecution in occupied Crimea.  Ayshe Umerova recalls meeting him for the first time when he came to visit her father Ilmi Umerov, Deputy Head of the Mejlis of the Crimean Tatar people and victim of punitive psychiatry.  For her, as for many other Crimean Tatars forced by Russia from their homeland, the pain of loss is made even harder by being unable to be present at his funeral.

Despite his age and very frail health, Server Karametov had himself faced persecution under the occupation regime.  On 18 May, 2017, the anniversary of the Deportation of the Crimean Tatar people, he was accosted and then detained by two police officers while standing alone, with photos of victims of the Deportation and the Crimean Tatar flag.  He was taken to a police station and held there for several hours, without being allowed to see a lawyer.

The Russian occupation regime proved able to sink much lower.  On 8 August 2017, Server Karametov was arrested while holding a peaceful solitary picket outside the High Court in Simferopol where one of Russia’s most lawless ‘trials’, that of Mejlis leader, Akhtem Chiygoz, was coming to an end.

All video footage and photos showed clearly that the elderly Crimean Tatar had not obstructed the way, and was simply standing with a placard reading “Putin, our children are not terrorists!”  Even Russian repressive legislation allows single-person pickets, and he was not preventing anybody passing.

He was, nonetheless, approached by four police officers and told to move.  Server Karametov was understandably indignant and said that single-person pickets are allowed.  They claimed that this was not the case outside the court, and while the policewoman stood videoing, Senior lieutenant Andrei Vladimirovich Sergeyenko appeared to grab at the placard.  When the elderly man angrily refused to leave, they manhandled him and forced him into their car.  The shameful incident can be seen here

The frail pensioner was charged with ‘resisting the police’, as well as with ‘infringing the procedure for holding a picket’, and taken to the police station.  He had certainly objected strongly, and his movements were rather jerky due to one of several serious medical conditions, however the charges were of shocking cynicism.

Server Karametov was held at the police station for four hours without the medication he needed to take at a particular time, and without any food.

He was then dragged off to the court to face the first charges of holding an ‘unauthorized protest’.  That hearing went on late into the evening, partly because Server Karametov became unwell and an ambulance needed to be called.

‘Judge’ Marina Vladimirovna Kolotsei from the Zheleznodorozhny District Court in Simferopol chose to accept that the legal single-person picket had ‘infringed’ the rules, and fined him ten thousand roubles, scheduling the hearing on the ‘resisting the police’ charge for the following morning.

On 9 August, Server Karametov was once again held in court all day, with this same ‘judge’ then sentencing him to ten days administrative arrest.   Although lawyers presented the medical documentation showing that Server Karametov’s state of health precluded his imprisonment, the sentence was upheld by High Court ‘judge’ Natalya Anatolyevna Terentyeva.

This appalling treatment and the sentence elicited protest from far beyond Ukraine, and Amnesty International declared Server Karametov a prisoner of conscience.

Demands for his release were ignored and he was forced to remain in detention for the full ten days.  Although it seemed impossible by that stage, the occupation regime managed to plummet to new depths.  The elderly man was supposed to be released at 9 p.m., but was instead secretly taken from the prison an hour or so earlier, and left, without any money, at the bus station.

Thankfully, people had begun gathering early in order to greet the unwavering defender of persecuted Crimean Tatars and some young men realized that he was being taken to the station and went to find him.

Server Karametov continued attending all ‘court’ hearings, meetings of the civic initiative Crimea Solidarity and Dua, communal prayers which are increasingly held for victims of enforced disappearances or political persecution under Russian occupation. His example, together with the placard ‘Our children are not terrorists’, was taken up by other Crimean Tatars, including on 14 October, 2017 when over 100 people stood in different parts of Crimea, silently affirming that truth.  Almost all were later themselves subjected to repressive measures.

Server Karametov was revered far beyond Crimea, and his death is a terrible loss.