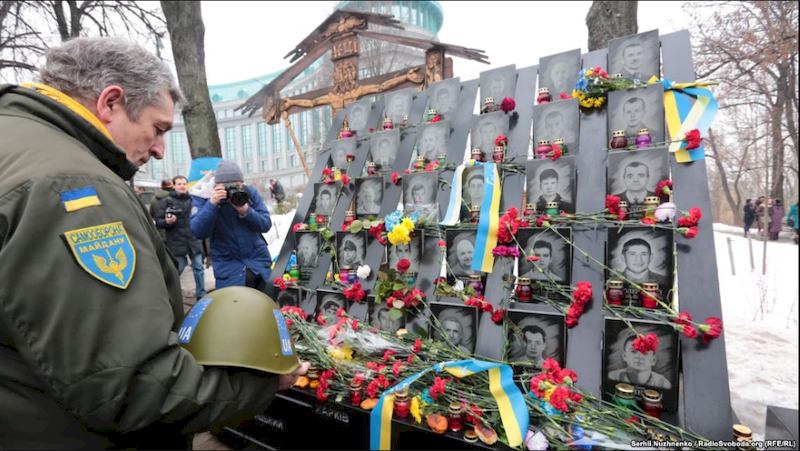 In an open appeal to Lutsenko, the Advocacy Advisory Panel express dismay at his apparent plan to dissolve the Department for Special Investigations.

This Department, under Serhiy Horbatyuk, has been painstakingly gathering evidence and preparing prosecutions for the courts over crimes committed during Maidan.  It is involved in around 150 criminal prosecutions investigating over 3 thousand offences during Maidan. Horbatyuk’s Department is structurally within the Prosecutor General’s Office, but independent, and has frequently antagonized the management of all law enforcement agencies through its blunt criticism of obstruction shown.  Horbatyuk himself has publicly spoken of systematic obstruction of the investigation from the Prosecutor General; the Interior Ministry and courts, as well as from Interpol.

The Advocacy Advisory Panel are blunt in calling the planned dissolution (or supposed reorganization) of the Department as“a step to both winding down investigations into Maidan crimes, and abandoning those prosecutions that have already been passed to the court”.

The lawyer had, from the outset, demanded that a coordination centre and a single department be established for investigating crimes against Maidan activists.  It was due to pressure from the victims, lawyers and civic society that the Department for Special Investigations was finally created in January 2015, with this marking the beginning of any real progress on investigating the crimes.  Before it was formed, the cases had simply gathered dust in various divisions of the Prosecutor’s Office and Interior Ministry.

On October 24, 2016 Lutsenko suddenly announced the reorganization of the Department.  Horbatyuk remained in charge, but lost a considerable number of investigators and prosecutors who were redeployed in a newly created department on investigating organized crime.  The Advocacy Advisory Panel note that assurances that this department would also be involved in investigating Maidan crimes came to nothing. Instead new prosecutions were not passed to the court; people were not informed that they were under suspicion; and those cases that had already reached the courts remained where they were, without any progress being made.  This, they say, is an example of how Maidan cases get investigated in other departments – they don’t.

“Dissolution of the Department and dispersal of investigators and the procedural heads around different divisions will destroy the single coordination centre for investigations and a single vision and strategy, nullifying the achievements of previous years. This will for a long time stop or significantly slow down investigations, or totally end them.”

The lawyers see the so-called restructuring of the Department as aimed at getting rid of Horbatyuk and other inconvenient investigators and prosecutors, and dissolving a unit with procedurally independent people as envisaged by the Criminal Procedure Code.  This, they believe, will make it possible to continue maintaining control over cases which the management of the Prosecutor General’s Office have an interest in, such as the case of Paul Manafort, as well as cases involving high-ranking officials, police or SBU [Security Service] officers, while simply forgetting about others.

The Advocacy Advisory Panel dismiss any attempt to manipulate public opinion by claiming that the so-called restructuring is required by legislative changes.  There have been no such changes, and there are no legislative impediments to the work of the Department.

They demand that the Department for Special Investigations be retained in its present form, and that the number of investigators and prosecutors be increased, rather than reduced.

There must be an end to pressure on Horbatyuk and on the members of his Department, including through threats of dismissal, artificial disciplinary proceedings, etc.

Unnecessary organizational measures such as removal of investigators and procedural heads; withdrawal of access to secret documents; inventories and transfer of cases, etc. are aimed at impeding the progress of the investigation and should stop.

Worth noting that back in 2017, the 2 May Group, a civic initiative investigating the tragic disturbances and fire on 2 May 2014, publicly called for the investigation into the events on 2 May to be handed to the Department for Special Investigations, as they were being sabotaged by the police and prosecutor’s office.  There has effectively been no real progress on those cases.

Lutsenko’s new ‘restructuring’ comes a few months after hard-hitting questions were asked on the fourth anniversary of Maidan.  By then, it was clear that the fears that Lutsenko’s  the effect of Lutsenko’s previous ‘reorganization’ would impede the investigation had been well-founded.

That this in no way enhanced progress was demonstrated by the investigation into the killing of 73-year-old Ludmila Sheremet and 21-year-old Dmytro Pahor on 19 February 2014, in Khmelnytsky.  It is likely that Ludmila Sheremet was killed by somebody in the SBU [Security Service], which makes the fact that the military prosecutor ‘lost’ the most crucial evidence – the bullet fired – of major concern. (see Prosecutor ‘loses’ critical evidence regarding Khmelnytsky Maidan killings).

There does not appear to have been any investigation into how this happened, and nobody has been held accountable.

This is in marked contrast to the treatment of Horbatyuk and his team, against whom even criminal investigations have been brought in connection with their work.

There seems no good reason for dissolving the only department which has genuinely achieved progress in investigating Maidan crimes, and which enjoys the trust of civic organizations and lawyers representing those who themselves faced persecution or attack during Maidan or the families of those killed (Nebesna Sotnya).