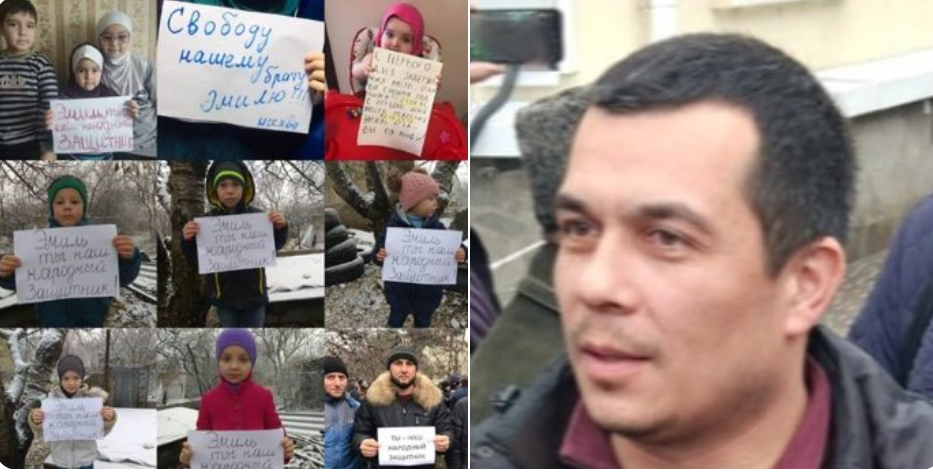 Emil Kurbedinov has been sentenced to five days’ imprisonment for an entirely innocuous video posted a year from Russia’s invasion and annexation of Crimea.  The sentence handed down by ‘judge’ Anton Tsykurenko means that Kurbedinov will have been jailed twice for this same video.  The latter was quite obviously a pretext for imprisoning Kurbedinov, and he links the move to his defence of one of the Ukrainian prisoners of war whom Russia seized in the Azov Sea on 25 November, as well as his role in many other hearings in political trials.

The internationally renowned lawyer was charged both times by the so-called ’centre for countering extremism’ under Article 20.3 of Russia’s code of administrative offences over a post from 2013 which allegedly showed symbols of the Hizb ut-Tahrir party.  The peaceful pan-Islamist Hizb ut-Tahrir party is illegal in Russia, but not in Ukraine, and Russia only invaded in 2014, however the absurdity of the charge does not end there. Kurbedinov has already once been detained and then imprisoned for ten days over this very same post.  In January 2017 the ‘prosecution’ was over the post on his VKontakte page, however Ruslan Shambazov from Russia’s ‘centre for countering extremism’ proposed including the identical post on Facebook to the material.  The ‘judge’ back then refused, claiming that it constituted a ‘separate incident’.

The occupation regime then waited almost two years to turn this ‘separate incident’, namely the Facebook post, into a new excuse for bringing charges against the renowned human rights lawyer.  They presumably understood that the question would arise as to why in December 2018, not earlier, and came up with a denunciation, purportedly sent to Crimea from a certain Muallem Sahim.  This individual, it is claimed, lived in Russia earlier, but is now living in Damas, Syria, from where he allegedly felt the urge to write about a six-year-old post on Facebook.

Kurbedinov has tirelessly defended the ever-increasing number of political prisoners under Russian occupation, and has helped ensure that the world is informed of what is happening in Crimea.  After the last prosecution, he said himself, that he is viewed as ‘enemy No. 1’ for his persistence and courage.  He also takes an active part in the Crimean Solidarity civic initiative, which appeared to be the reason why he, his colleagues Edem Semedlyaev; Lilia Hemedzhy and rights activist Dilyar Memetov, were all handed ‘warnings of the inadmissibility of extremism’, also on highly implausible grounds.

It is likely, as Kurbedinov himself believes, that he has been targeted now because he is representing Bohdan Nebylytsa, one of the 24 Ukrainian prisoners of war, whom Russia seized after its attack on three Ukrainian naval boats on 25 November.  Two days later, Kurbedinov noted that “Russian journalists have begun actively discussing the lawyers defending the Ukrainian sailors, claiming this to undermine the reputation of lawyers!”.  He suggested then that his colleagues and he needed to get together and consider a collective defamation suit.

At least 50 Crimean and Russian lawyers have expressed readiness to represent the POWs, and there was a huge surge in support and donations in response to calls from prominent members of the Crimean Tatar community.  This may well have been the reason why Russia secretly moved all the men to the Lefortovo Prison in Moscow.  That also failed to deter Crimean Tatar leader Nariman Dzhelyal and others who drove through the night to deliver the items of food, clothing and a very large amount of money collected to the men in prison.

Russia is evidently enraged by solidarity that its methods of repression are proving unable to crush.  It has now used overt measures to frighten people from taking part in meetings of Crimean Solidarity, yet they still come.  Outside the Kievsky District Court in Simferopol over 200 people came to peacefully show their support for Kurbedinov.  One held a placard reading “You are our National Hero”,  a sentiment very widely shared, and not only by those in Simferopol.

Kurbedinov was also defended by a formidable team of 12 lawyers.  It was they who asked for the hearing to be adjourned until Friday morning.

Journalist Anton Naumlyuk reports that the ‘expert assessment’ of the post was carried out by Andrei Nikiforov from the Russian-controlled Crimean Federal University.  Nikiforov has a doctor in historical and political science and there is nothing to suggest that he has any expert knowledge on Hizb ut-Tahrir.  Quite the contrary, since one assertion was demonstrated by an independent expert to be false.  Nikiforov clearly provides the ‘assessments’ required of him and these, Naumlyuk writes, have been used in at least nine administrative prosecutions of Crimean Tatar activists and Muslims.

Another individual involved in the new attack on Kurbedinov was Andriy Sushko, the former Ukrainian SBU officer, who betrayed his oath and is now in the Russian FSB. It is possible that he was instrumental in initiating these new charges as revenge.  It was his role, which Kurbedinov helped to identify, in the savage torture of Crimean Tatar activist Rinat Paralamov that led to Sushko being placed on the USA’s sanctions list.  Sushko is reported to have provided the questionable ‘evidence’ that the page on Facebook was, in fact, Kurbedinov’s, although it is hard to imagine that this would have been disputed.  It was, however, on the basis of his ‘testimony’ that the administrative charges were brought.

As mentioned, Kurbedinov was first detained on 27 January 2017 and jailed for 10 days for posting a video of a Hizb ut-Tahrir meeting a year before Russia’s annexation of Ukrainian Crimea.  It should be stressed that Hizb ut-Tahrir remains legal to this day in Ukraine, and Russia has never provided an adequate reason for calling it ‘terrorist’ and sentencing men to huge sentences for supposed ‘involvement’ in it.

The charge against Kurbedinov was over a so-called administrative offence, yet his office and home were subjected to searches over a supposed criminal case about the activities of Hizb ut-Tahrir.  Since Kurbedinov is defending several political prisoners facing charges of involvement in Hizb ut-Tahrir, this was a flagrant violation of lawyer’s confidentiality, as well as of his clients’ right to a fair trial.

Russia has already carried out an act of open warfare against Ukraine and is refusing to hand over Ukrainians who are undeniably prisoners of war according to the Geneva Convention.  This new attack on a prominent lawyer, defending one of the POWs, as well as many of Russia’s Ukrainian political prisoners, is a further dangerous escalation in its repression which needs international response.