Ukraine needs real debates between Poroshenko and Zelenskiy – candidates are not “colouring books”Where Ukraine’s presidential candidates Poroshenko and Zelensky (don’t) stand on Crimea and DonbasZelensky appoints Kolomoisky lawyer with shady past to head his AdministrationPresident-Elect Zelensky and Multiple Questions Still UnansweredUkraine dissolves notorious Kyiv court recently implicated in Russia’s attempt to reinstall Yanukovych Russian invaders abduct two Ukrainian Greek Catholic priests from Berdiansk and accuse them of ‘terrorism’ Zelensky urged to veto law that puts Ukraine on track for more damning European Court judgments Russia kills Minsk Agreement, with lives of over 300 Ukrainian hostages and POWs in danger Ukraine hammered by Court in Strasbourg for endless torture of life prisoners US imposes sanctions on former Yanukovych aide Andriy Portnov for corrupting Ukraine’s courts With Russia waging war against Ukraine, ask Zelensky why he wants impunity for war criminals A child when seized, Bohdan Kovalchuk has spent 5 years in Donbas militant captivity 400 Ukrainians imprisoned without a crime in Russia, occupied Crimea and Donbas Zelensky fails crucial test for restoring justice in Ukraine Free Yaroslav Mysyak: NGOs call on US President to ask Zelensky to pardon Ukrainian youth pastor What is next?Ukrainians tortured and imprisoned in Donbas for supporting Ukraine, with Russia blocking their release Why is President Zelensky prolonging impunity for war crimes in occupied Crimea and Donbas? Zelensky’s ethnically profiled ‘sanctions’ put Ukraine on a level even Russia has not reached Zelensky imposes sanctions against men who fought for Ukraine in Donbas
• Topics / Politics and human rights
• Topics / Social and economic rights 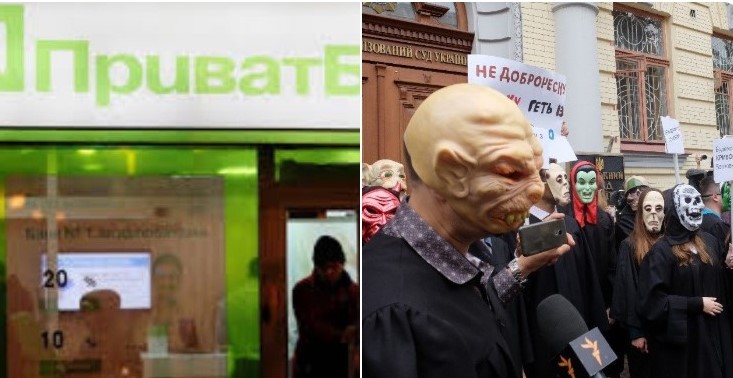 Ukrainian legal watchdogs and civic activists had long questioned the integrity of all three of the judges involved in a highly controversial ruling on 18 April which found the nationalisation of PrivatBank to have been unlawful, and they have sounded their frustration that such concerns were never addressed. The ruling elicited fairly strong statements of concern from Ukraine’s western partners who supported PrivatBank’s nationalisation.  It also raised eyebrows because of the link between Volodymyr Zelensky, the candidate ahead in the presidential elections on 21 April, and Ihor Kolomoisky, the oligarch who stands to win if the appeal against this ruling is unsuccessful.  Nor was this the only court decision on Thursday that attracted attention, specifically in the context of the presidential elections.

Kolomoisky himself made no secret of his jubilation after hearing the ruling from the Kyiv District Administrative Court on Thursday.  He was a co-founder of PrivatBank which the government nationalized in 2016, as part of a banking clean-up which was supported by the International Monetary Fund.  Both the European Union in Ukraine and the US Embassy issued identical statements affirming their support for the nationalization of the bank.

“In 2016 Ukraine’s international partners supported the decision of the government and the National Bank of Ukraine (NBU) to nationalize PrivatBank, at the request of former owners, as the only effective method of protecting the bank’s depositors – the Ukrainian people and businesses – and the stability of the financial system. While this required the injection of about UAH 160 billion in Ukrainian taxpayer funds to restore the bank’s solvency, it secured PrivatBank’s long-term viability, safeguarded the money of millions of Ukrainian citizens, and strengthened the country’s economic health”.

Kolomoisky has been fighting ever since, and denies the National Bank’s assertion that money was siphoned off before nationalisation.  He had, however, lost the last court battle in September 2018 at the same court, but presumably with different judges, and Thursday’s ruling came as a bombshell.

If the polls are right in predicting a Zelensky victory, then the timing of the ruling is convenient for the latter since it does not look as though he instigated it.  Indeed Zelensky and his team have used the ruling to criticize failings in judicial reform under President Petro Poroshenko.  Zelensky’s remarks were extremely short on detail, making it unclear how in this context he would “defend Ukrainians with respect to PrivatBank”.  Kolomoisky himself stated 10 days ago that he was not trying to get PrivatBank back, but is demanding ‘repayment’ of two billion dollars which he alleges he is owed.

Ukraine’s National Bank immediately said that it would be appealing against Thursday’s ruling, and it may still go against Kolomoisky.  One very cynical conspiratorial theory could, in fact, be that it was President Petro Poroshenko,  Zelensky’s rival, who instigated the ruling to fuel fears over the link between his opponent and Kolomoisky.

The Kyiv District Administrative Court itself and specific judges have gained notoriety over the years for politically motivated rulings.  CHESNO has dossiers on all three of the judges involved in this ruling.  It points to a Bihus.info investigation which alleged that Keleberda had resorted to a fictitious divorce in order to conceal property outside Kyiv, as well as to Keleberda’s  ban on peaceful protest in 2013 against controversial reconstruction work on a historical landmark, Hostyny Dvir.  Amelyokhin was one of the judges who rubberstamped a government decision in 2012 to take away Hostyny Dvir’s architectural landmark status, and then refused to prevent construction work at the site.  The doubts in Kachur’s case are linked with what he failed to put on his income declarations.

Mykhail Zhernakov, head of the De Jure Foundation, points out that all three judges were supposed to have gone through reassessment last month, but it was postponed by the High Qualification Commission of Judges for reasons unknown.  He and his colleagues believe that rulings like that passed on 18 April would not be happening had real court reform been carried out.

It is, unfortunately, true that few politicians have ever shown real will to clean up the judiciary, presumably because they all assume that at some time they may themselves want the services of malleable ‘judges’.

Law on Lustration and Andriy Bohdan

On 17 April, Skhemy investigative journalists reported an alleged secret meeting between Andriy Bohdan, who is both a close associate of Zelensky and Kolomoisky’s lawyer, and Stanislav Shevchuk, Head of the Constitutional Court.  This was potentially momentous in that the Constitutional Court is currently considering whether the Law on Lustration passed in 2014 is unconstitutional.  Bohdan was twice a government representative on ‘anti-corruption policy’ under Yanukovych, and because of this is prevented from holding a public post for 10 years.  Constitutional Court rulings are final and if the law on lustration was declared unconstitutional, there would be no restrictions on Bohdan.

There is, in principle, no proof that Bohdan wants such a post.  It was noticeable on Thursday evening when Zelensky finally presented his team, that Bohdan was not attributed a position, although he is widely seen as a person close to the presidential hopeful.

It is difficult also to imagine what Bohdan had to discuss with the Head of the Constitutional Court, so there was apprehension about the CCU session on 18 April.  The Court’s website did not give any reason for postponing the session scheduled for 10.00, and it can only be guessed whether publicity from the Skhemy program was behind the postponement.  The site mentions only a continuation of the Court’s deliberations which began four years ago, however a number of activists were concerned that there might be an attempt to get the law on lustration, as well as demands regarding e-declarations revoked before the presidential inauguration.

While there were concerns about this law from the outside, it does not seem unreasonable that a person answering for the imitation of anti-corruption policy under Yanukovych should fall under its jurisdiction.  It is therefore not only the fate of the ruling on PrivatBank that will be followed closely over the coming weeks.