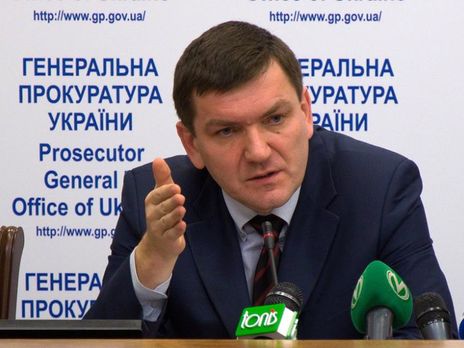 The Head of the Department of Special Investigations, Serhiy Horbatyuk and another top prosecutor investigating crimes against Euromaidan activists, Oleksiy Donsky are facing dismissal after they refused to sign an agreement to the use of anonymous denunciations not requiring official confirmation.  Another known reformer, Vitaly Kasko, who was recently appointed First Deputy Prosecutor General, has defended the procedure which could result in Horbatyuk’s dismissal.

It is reported that both men filled in an application for the certification in their own words, rather than using the form given, with the reason being one particular part of the form.  This reads as follows:

“I agree that during the interview and confirmation of the decision by the staffing commission, information could be taken into account which was received from individuals or legal entities (including anonymously) which are not subject to additional official confirmation”.

This certainly appears to suggest that anonymous reports can be taken into account despite not having been verified.  This is how Horbatyuk, Donsky and, reportedly, over 200 other prosecutors understood the clause and they refused to sign it.  Donsky has now confirmed to Hromadske TV that neither he nor Horbatyuk have been allowed to take part in the certification process. Donsky calls such a clause absolutely unacceptable, and says he considers it unlawful.  The objection is very clearly to the use of anonymous denunciations that have not been verified, not to the fact alone that they are anonymous.

Donsky asserts that there is no such demand in the law envisaging certification procedure.  The law, however, does state that if a person does not receive certification, they may be dismissed.

If this is indeed the case, then two prosecutors who have consistently earned public trust through their work in investigating crimes committed during Euromaidan, or the Revolution of Dignity, could be removed from the prosecutor’s service through procedure purportedly aimed at cleaning up this service and raising public confidence in those fulfilling such duties.

There is certainly a high level of distrust in the prosecutor’s service.  According to Kasko, the newly-appointed First Prosecutor General, recent surveys suggest that the level of confidence is around 10-15 %.

Kasko seems to be initiating the same mechanisms for an overhaul of the prosecutor’s office that were first started and then effectively sabotaged by former Prosecutor General, Viktor Shokin.  Kasko was then also one of several Deputy Prosecutor Generals, and resigned in protest at what he called the total lawlessness and corruption in the prosecutor system.

The new system of certification of prosecutors will, Kasko says, be made up of several stages, including a test to check their professional knowledge; an interview; and a broader check of their professional abilities and integrity.  According to Kasko, “we have suggested that civic organizations and all citizens send the commission information about any problems with this.  We have also agreed a memorandum with NABU [the National Anti-Corruption Bureau] on checks of prosecutors.  They will submit information about any problems with integrity of the prosecutors to the commission”.

He also mentions the Law on Preventing Corruption from 2014 which states that all bodies engaged in combating corruption consider anonymous reports.

He asserts that “under no conditions will anybody take anonymous reports into account in order that somebody is automatically considered as not having received certification. All sources will be checked”.

This is certainly what should be the case, yet it does not appear to be what the applicants have been asked to sign their agreement to.  While international anti-corruption practice gives scope for whistle-blowers coming forward with incriminating information, it surely does not allow for a situation where anybody can make allegations which “are not subject to official confirmation”.   If the document made public is authentic, then Kasko’s assurances cannot allay concerns about a commitment given in writing.