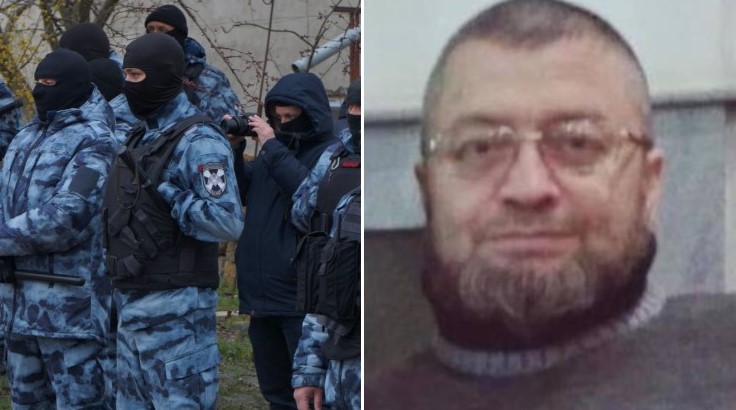 58-year-old Dzhemil Gafarov is one of the oldest of the 24 Crimean Tatar civic activists and journalists arrested in Russian-occupied Crimea on 27 March 2019.  He is also the most gravely ill, with a serious kidney disease that in 2017 caused him to have a heart attack and that urgently needs proper treatment.  There are no grounds for this recognized political prisoner being held in detention at all, and Russia is in grave breach of international law by using its legislation to prosecute and imprison Ukrainians from Crimea.

Russia is, however, also flouting its own legislation which states clearly that people with such serious illnesses should be released from detention.  It is this that has prompted Russian doctor and civic activist Olga Mazurova to launch a petition demanding that Russia comply with its own regulations and release Gafarov.  His very life, she stresses, depends on our support.  The petition can be signed here

Gafarov has fourth stage kidney disease which is only a step away from the fifth, namely kidney failure.  According to Raziye Gafarova, this means that her husband is experiencing a permanent state of blood poisoning.  By now, the level of filtration of the kidneys is between a quarter and a third of what it would be for a person in good health, with this, Mazurova says, being typical of a person in pre-dialysis stage.

The petition is therefore demanding that Gafarov be examined by independent doctors.  He should be immediately hospitalized for an independent medical examination which will correctly identify the treatment he needs and the conditions for receiving it.

The demand for independent medical examination is made with good cause. Gafarov’s lawyer, Rifat Yakhin reported back in September that court battles had been needed just to get Gafarov examined by doctors.  On both occasions, the doctors concluded, as was required of them, that there was no reason for Gafarov to not be held in detention. During at least one of these ‘examinations’, he was chained to a bed and surrounded by armed men.

Given Gafarov’s state of health, such ‘maximum security’ measures would be inappropriate even were he suspected of a serious crime.  In fact, he is not accused of anything that constitutes a crime in a democratic country based on rule of law.  Although Russia had begun persecuting Crimean Tatar civic activists and trying to crush the Crimean Solidarity civic initiative much earlier,  it was the mass arrest in March 2019 of 24 Crimean Tatar activists that elicited strong protest from the EU and democratic countries, and prompted international NGOs to issue statements of condemnation about such avert abuse of ‘terrorism’ charges.

The renowned Memorial Human Rights Centre has consistently reacted to Russia’s illegal prosecution of Ukrainian Muslims in occupied Crimea, however these mass arrests prompted a swift statement in which all 24 men were declared political prisoners.  Memorial pointed out that Russia is using fabricated charges carrying huge sentences to try to crush the Crimean Solidarity movement in occupied Crimea and all Crimean Tatar human rights activists who are involved in helping political prisoners and their families, and in many cases, reporting on rights abuses. Memorial’s analysis highlighted both the flawed nature of the charges which by now Russia has illegally brought against 65 Ukrainian Muslims in Crimea, and the real aim of the prosecutions, namely to silence Crimean Tatars with an active civic position.

The ‘operation’ that began on 27 March 2019 was the largest-scale wave of armed searches and arrests since Russia invaded and annexed Crimea in 2014.  The FSB and other armed and masked enforcement officers turned up at the homes of 24 activists from Simferopol.  Judging by initial reports, such as that of lawyer Emil Kurbedinov, it seems likely that they planted ‘prohibited literature’ during their ‘searches’ of these homes.  Four men were not at home, however three of them (civic journalists Osman Arifmemetov and Remzi Bekirov, as well as activist Vladlen Abdulkadyrov  were seized and violently beaten that evening.  It seems likely that the FSB had planned this case with 24 ‘defendants’, so when the 24th man,  Edem Yayachikov, was (seemingly) not found, they arrested another activist, Rayim Aivazov instead.  Aivazov described his arrest during the detention hearing, saying that he had been beaten and subjected to a mock execution.

The first 23 activists were taken almost immediately to Russia, in yet further proof that this was a targeted operation aimed at maximum terrorization.

All the men are accused of ‘involvement’ in the Hizb ut-Tahrir movement, a pan-Islamist party which is legal in Ukraine and which is not known to have ever committed any acts of terrorism.  Russia is the only country in the world that has declared the movement ‘terrorist’, with the effectively ruling in 2003 likely to have been because a pretext was needed for forcibly returning Uzbek asylum seekers to Uzbekistan where they were facing religious persecution.

With respect to the arrests of 24 Crimean Tatar activists, Memorial HRC wrote: