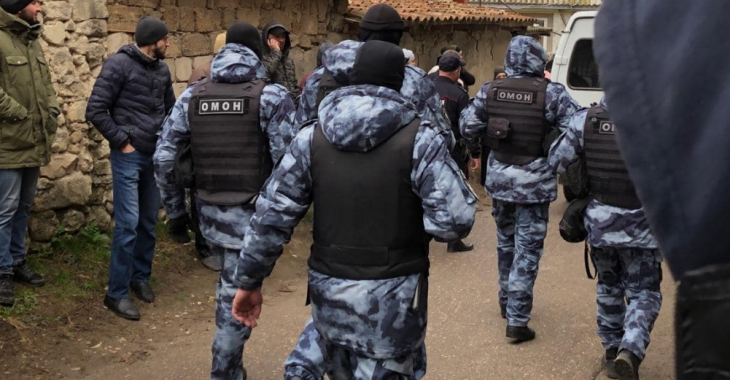 After seven years of open or effective Russian occupation, Crimea and Eastern Donbas rank close to the worst of the worst in Freedom House’s report Freedom in the World 2021.  Occupied Crimea is with Somalia and Saudi Arabia at 7/100, while occupied ‘Eastern Donbas’ is only one notch above North Korea at 4/100.  Even that ‘achievement’ is strictly relative, since in terms of political rights Eastern Donbas falls below North Korea’s 0/40 with minus 1!. Both occupied Ukrainian territories have fallen by a point from the pitiful ‘Not Free’ ratings they received a year ago, and are substantially lower than Ukraine’s ‘Partly Free’ score of 60/100.

Since the situation in occupied Crimea and in the so-called ‘Donbas and Luhansk people’s republics’ (Freedom House’s ‘Eastern Donbas) is the result of Russia’s aggression, it might, at first glance, seem curious that Russia’s own rating, while still ‘Not Free’, is higher, at 20/100. In fact, this was predictable. .

Russia’s invasion and annexation of Crimea was based on lies, with Moscow initially even trying to deny that it was behind the Russian soldiers without insignia who had taken control.  It is still claiming that ‘Crimeans’ decided to hold a ‘referendum’ and that it was on the basis of this stunt, which no democratic country ever recognized, that ‘Crimeans voted to join the Russian Federation’.  It is impossible to maintain such a false narrative without suppressing the independent media and crushing peaceful protest.  In its Freedom of the Press 2015 report, Freedom House gave occupied Crimea a damning assessment on all rights, including freedom of expression, and ranked it as one of the ten ‘worst of the worst’.

The situation has only deteriorated, and of Russia’s 115 Crimean Tatar and other Ukrainian political prisoners (not counting those who have been released or who served their sentences to the full), the vast majority were arrested in Crimea.

In its assessment this year, Freedom House writes that “the occupation government severely limits political and civil rights, has silenced independent media, and employs antiterrorism and other laws against political dissidents. Many Ukrainians have been deported from or otherwise compelled to leave Crimea. Members of the indigenous Crimean Tatar minority, many of whom continue to vocally oppose the Russian occupation, have faced acute repression by the authorities.”

There is no political pluralism at all, with Ukrainian parties banned, and the FSB; Russian-controlled police and so-called ‘self-defence’ paramilitaries “use intimidation and harassment to suppress any political mobilization against the current government or the annexation of Crimea.”

Freedom House also points out that Crimean Tatars and ethnic Ukrainians “are regarded with particular suspicion and face greater persecution than do ethnic Russians.”

Worth recalling that the UN’s International Court of Justice began preliminary proceedings in Ukraine’s case against Russia in March 2017 and, on 19 April 2017, agreed that there were grounds to impose provisional measures on Russia.  It ordered the latter to revoke its ban on the Mejlis, or self-governing body of the Crimean Tatar people and to ensure that education was available in the Ukrainian language.  Russia has thus far ignored the orders and is currently concentrating on dragging out the court proceedings.

As mentioned, Eastern Donbas is now right down with the worst human rights offenders.  Although in occupied Crimea, the Russian FSB often tries to deprive political prisoners of independent lawyers, they do not always succeed.  While the verdicts and shocking sentences in political trials may be predetermined, there is, at least, the possibility of demonstrating the fabricated nature of the charges, and, eventually, of applying to the European Court of Human Rights.  Although many civic activists, especially from Crimean Solidarity, have themselves been arrested and imprisoned, others do continue reporting on social media with at least some freedom.

All of this is inconceivable in occupied Donbas where tweets about the political, military or economic situation can get you seized, tortured, and imprisoned, including in secret prisons, like ‘Izolyatsia’.  Many have simply disappeared; others are later reported to have been ‘sentenced’ to 12 or 15 years on so-called ‘spying’ charges. There are none of the safeguards for a fair trial and the outcome is essentially determined in advance. .  As Freedom House notes, “Both [pseudo-republics] are entirely dependent on Moscow for financial and military support, and their leaders have openly proposed joining the Russian Federation. Politics within the territories are tightly controlled by the security services, leaving no room for meaningful opposition. Local media are also under severe restrictions, and social media users have been arrested for critical posts. The rule of law and civil liberties in general are not respected.”

There is no political pluralism, and “meaningful competition, even within the pro-Russian separatist movement, is not tolerated.”

“Russia has established a complex web of control over the “People’s Republics” that affects all aspects of daily life, including political affairs. Local media, schools and universities, public services, and business structures are dominated by people loyal to the separatist leadership. While many of them are locals, some key positions are held by Russian citizens. Political control is ultimately enforced by the secretive “state security” ministries of the two entities, which are thought to be directed by Russia’s Federal Security Service (FSB). The military formations known as “people’s militias,” which have tens of thousands of men under arms, are believed to be commanded by regular Russian military officers.”

The Freedom House reports are of importance given pressure on Ukraine, for example, from Germany and France, via the Normandy Format negotiations, to agree to the ‘local elections’ which Russia is trying to foist on the occupied territory, without disarmament and renewed control of the border with Russia.  The reports make it clear that there is no independent media or freedom of speech, and it is downright dangerous to speak Ukrainian or express pro-Ukrainian views.  It is simply inconceivable that such ‘elections’ could be free, fair and in accordance with Ukrainian legislation.

On 11 December 2020, the Chief Prosecutor of the International Criminal Court, Fatou Bensouda announced that she had found reasonable grounds for believing that war crimes and crimes against humanity have been committed in connection with the conflict in Donbas and with Russia’s ongoing occupation of Crimea.  These, she said, are sufficiently grave to warrant investigation by the ICC.

None of the above is meant to suggest that Ukraine’s record is dazzling. It is not, and since it has dropped two points since last year, there is plenty that needs addressing here also.