Remembrance banned as ‘extremism’ and political trials on anniversary of Crimean Tatar DeportationProhibited remembrance of Crimean Tatar genocide and mounting terror in Russian occupied Crimea Russia sends relatives of Ukrainian soldiers and other Mariupol residents to ‘concentration camp’ in occupied DonbasRussia destroys Mariupol and tries to get illegally deported residents to move to Siberia Russia continues bombing Mariupol while producing propaganda videos about its ‘humanitarian aid’Kazakhstan opposition activists beaten up and threatened with deportation by Ukraine’s Security Service Russia ramps up toxic hate speech as it escalates its attack on Crimean Tatars Crimean Solidarity Coordinator re-imprisoned for video posted two years before Russia annexed Crimea Every second Russian supports a monument to Soviet dictator Stalin Belarusian activist threatened with deportation from Ukraine for criticizing the police Ukrainian could face prison for Victory flag in memory of his grandfather who fought in WWIIRussia blocks military archives in further effort to distort the truth about World War IIRussia instils ‘patriotism’ in occupied Crimea with automatic rifles and propagandaRussia sentences Seiran Saliyev to 16 years on same political charges as his great-grandfather in Soviet timesState honour in Ukraine as Russia prepares horrific sentence against Crimean Solidarity CoordinatorDeportation of Crimean Tatar and other Ukrainian political prisoners to prisons in Russia is a war crimePutin’s law aims to educate ‘patriots of Russia’ and eliminate Ukrainian identity in occupied CrimeaRussia is committing a war crime by deporting Ukrainians from occupied Crimea“Mama, have they come to kill us?” Russia’s new-old terror and deportation of Crimean TatarsPolitical prisoners deported to Russia speak out on anniversary of Crimean Tatar Deportation
• Topics / Deported peoples
• Topics / Human Rights Abuses in Russian-occupied Crimea 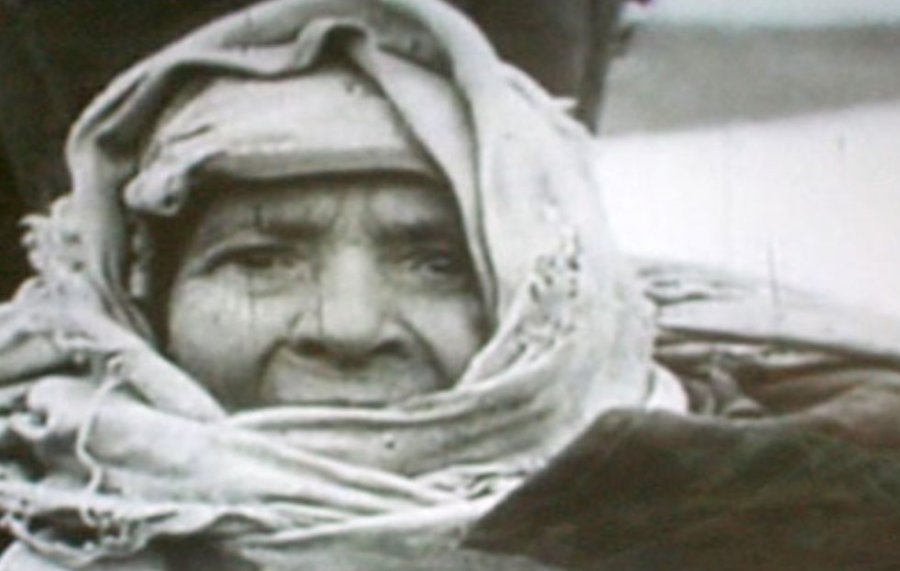 Samira Aliyeva, a fourth-grade student in Russian-occupied Crimea, should have been praised for her homework assignment about her great-grandfather, a WWII veteran and victim of Stalin’s 1944 Deportation of the entire Crimean Tatar people.  Instead, her teacher traumatized Samira and the other Crimean Tatar children in the class by repeating, as fact, the lies used by Stalin’s regime to justify an act of genocide.  The incident has aroused outrage, but no official comment, and there is nothing to suggest that it could not happen again. It was only after a major scandal in 2019 that similar lies were removed from a history textbook for schoolchildren.

Samira Aliyeva is in the fourth grade at a school in Dachnoye.  Her iiterature teacher, Yelena Alekseyevna Rudenko, had set them a homework task of writing about the experiences of grandparents or great-grandparents in the Second World War.

On 5 April, Samira began explaining to the class that her great-grandfather was seriously wounded at the front and returned home.  He and her grandmother were therefore both victims of the Deportation that began on 18 May 1944.  The conditions, both during the journey in cattle vans, and in their place of exile, were appalling and  Samira’s grandfather, who was probably weakened by his war injury, died a year later, leaving his wife with five children whom she raised alone.  Samira finished her tale, explaining how many great-grandchildren her grandmother lived to see.

Rudenko had, however, interrupted once, to say that after Samira’s presentation, she would tell them “why the Crimean Tatars were sent away”.  After Samira finished, Rudenko claimed to a class of eight Crimean Tatar and eight Slavonic children that the Crimean Tatars “were exiled because they were traitors, and this treason was that they helped the Germans, the occupiers to seize Crimea”.    At least one of the other girls in the class arrived home in tears, and Samira’s mother reported that her daughter had immediately felt that the non-Crimean Tatar children were all looking at them with condemnation.

The parents have since consulted with lawyers and want a proper reaction from the occupation authorities.  For the moment, there is nothing to suggest that one will be forthcoming, despite the shocking treatment of children and the fact that the teacher is spreading what even the Soviet regime acknowledged were lies.

Stalin’s Deportation of the entire Crimean Tatar people is recognized by Ukraine as an act of genocide.  More than 180 thousand Crimean Tatars were forcibly deported over a few days following May 18, 1944.  Samira’s great-grandfather was among them only because he had been wounded.  The majority of the victims were elderly, or women and children.  Families were given as little as 15 minutes to prepare for the journey, with the NKVD operation carried out with enormous brutality.

While the other nationalities also deported under Stalin were allowed to return in the 1950s, the Crimean Tatars were only formally able to come back to Crimea from 1974, with this only becoming a real possibility during Mikhail Gorbachev’s ‘perestroika’, and then after Ukraine’s gained independence.

This was despite the Supreme Soviet’s decree from 5 September 1967 which called attempts to level accusations against some Crimean Tatars of collaboration at the entire Crimean Tatar population groundless and said they must be withdrawn.

With respect to accusations of collaboration, Asya Pereltsvaig writes that it is true that “many Crimean Tatar religious and political leaders had indeed called for collaboration with the Nazis, considering them as “the enemy of the enemy”” and that there were Crimean Tatars who fought for Wehrmacht battalions.  The numbers, however, would constitute less than 5% of the total Crimean Tatar population.  It should also be remembered how up to 80 thousand Crimean Tatars fought in the Soviet Army and took part in the partisan struggle against the Nazi and Romanian occupiers.

Under Russian President Vladimir Putin, in Russia and, since 2014, in occupied Crimea, the Second World War (or the so-called ‘Great Patriotic War’ from 1941-1944) has become a major part of Russian state narrative, with this leading to a whitewashing of Stalin’s crimes and effective rewriting of the many dark pages of the Soviet history of the time. Acts of genocide and mass murder jar with Russia’s attempt to present Stalin as a great leader in the War and to justify the Soviet Union’s collaboration with Nazi Germany from the invasion and carving up of Poland until Hitler invaded on 22 June 1941.

There was outcry in February 2019 when some of the contents of a school 10th grade history textbook became known.  The textbook ‘History of Crimea’ also repeated the claim that the Crimean Tatars were collaborators who helped the Nazi occupiers during the Second World War and even asserted that “the majority of the Tatar population were loyally disposed towards the Germans and many actively helped them”.  On that occasion, the occupation authorities did retreat and announced that they would remove it from schools and would form a working group to ‘assess’ the offending parts.

Crimean historian, Volodymyr Polyakov has told Krym.Realii that he does not see the situation at Samira’s school as a scandal out of the blue.  Rudenko may well have expressed a story that she heard in children.

“If they hadn’t removed and corrected that 10th grade textbook, where they spoke of “20 thousand traitors” from among Crimean Tatars, that teacher would now simply say that she was quoting a textbook. <> They talk about the Deportation, about how it was, but they don’t say why it happened – about the criminal regime at that time, about Stalin as a criminal.  Russians in general should stop fearing Crimean Tatars – they [the Russians] were brought to Crimea and continue to feel like settlers.”

Russians were indeed brought in after the Deportation, and for many the lies about Crimean Tatars probably helped them justify occupying the property of people who had been forced from those homes.

Eskender Bariev, member of the Mejlis of the Crimean Tatar Mejlis and head of the Crimean Tatar Resource Centre is convinced that the Russian occupation regime in Crimea are tacitly supporting such ‘justification’ of the Deportation. Yes, you could meet with such illiterate teachers even before annexation, but now these is something systematic in the approach, he says, with this meaning that children like Samira even now, in the 21st century, are forced to endure the same psychological trauma.