Ukraine’s Ombudsman takes unprecedented and contentious step in defence of LGBT rightsSavage sentences against Crimean Tatar journalists for reporting on Russia’s ‘state terrorism’ in occupied Crimea ‘Mogilisation’. Anti-war activities in Russia, 26 September to 1 OctoberNew Russian shelling of Zaporizhzhia Nuclear Power Plant raises real spectre of nuclear disaster Global Initiative ‘Breaking the Vicious Circle of Russia’s Impunity for Its War Crimes’ (also known as ‘Tribunal for Putin’)Staged Donbas ‘evacuation’ and fake sabotage in Russia’s war against Ukraine. Where are the sanctions?Hard-hitting Ukrainian journalist leaves Russia after accusation of ‘incitement to enmity against Russians"On the pettiness of suspicion of Petro PoroshenkoSame notorious ‘experts’ used against Memorial as in Russia’s persecution of Yury Dmitriev, Pussy Riot & Jehovah’s WitnessesYanukovych phoned Russian President Putin 12 times during the mass killings on Maidan Lawyer detained in Russian-occupied Crimea and ordered to strip naked Russian court ignores falsified evidence and dodgy "witnesses" in trial of Crimean Tatar political prisoners Russia calls Soviet invasion of Poland in 1939 a ‘march of liberation’ Information about Covid-19 blocked in occupied Crimea, not the Russian tourists spreading itA brief description of the KHPG strategic litigations in the first half of 2021Russian proxy Donbas ‘republics’ criminalize ‘defamatory’ criticism on the InternetUkraine is illegally deporting activist to Belarus to face persecution Rustem Sheikhaliev on trial for reporting Russian persecution in occupied Crimea Application practice of Article 110 of the Criminal Code of UkraineA brief description of the KHPG strategic litigations in July–December 2020
• Topics / Prohibition of discrimination 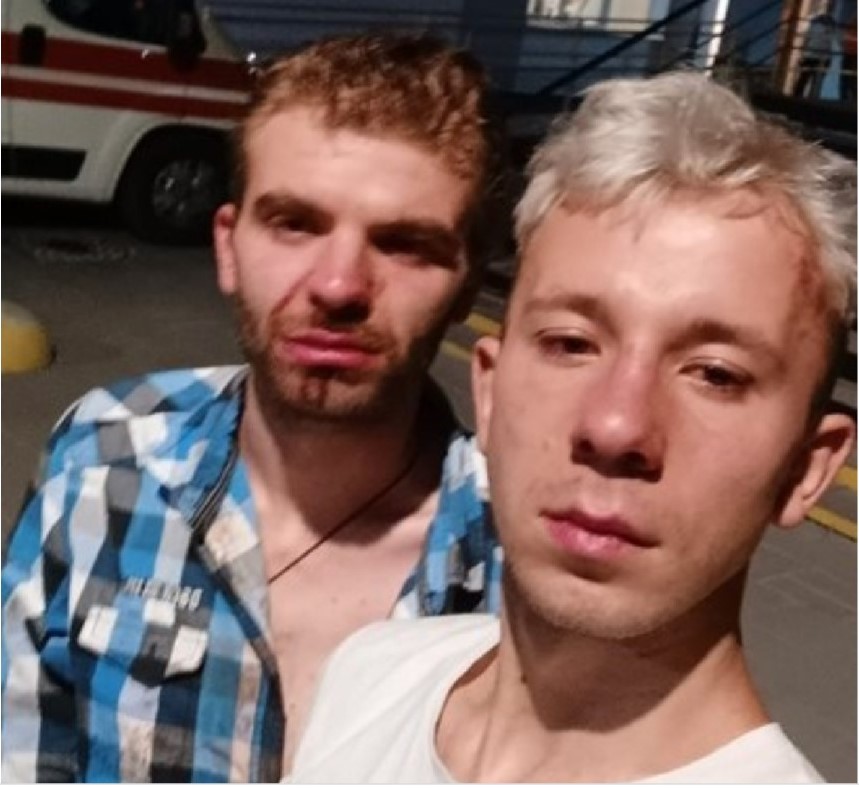 Two men have been convicted of attacking poet Serhiy Savin and Maksym Verba, a  street musician, in July 2021 with one of the men receiving a real, 4.1 year sentence, the other a 4-year suspended sentence, the real prison sentence passed on 15 November is the first actual term of imprisonment imposed for a homophobic attack in Ukraine where it is notoriously difficult to get hate crimes treated as such.  Two other men are also facing charges over the same attack, with even the two sentences passed only from a first-level court and still subject to appeal.

Serhiy Savin and Maksym Verba were attacked in the centre of Lviv during the night from 25 to 26 July 2021 by a group of young louts who believed the two men to be gay.  Both men were beaten, and a wallet and telephone were stolen.  Four individuals were arrested shortly afterwards, but were charged initially only with ‘hooliganism’ (Article 296 of Ukraine’s Criminal Code).  Lawyer Oksana Huz, who was representing the victims, that Ukraine does have Article 161, which should protect people against hate crimes and discrimination.  “Unfortunately, it is almost impossible to use to bring hooligans to answer.  In this case, we agreed on [the classification] hooliganism, but with a homophobic motive indicated.  This is important for us since there are certain questions to various radical gangs.”

There are conflicting reports as to whether the 15 November sentence passed on the second assailant by judge Viktor Romaniuk from the Halytsky District Court in Lviv was for 3.10 years or 4.1 years (with the latter reported by Insight who report the real sentence as their success.  The NGO reports that the sentence on 15 November was passed, bearing in mind both details of the attack and a previous criminal record where the person had not served the sentence.

In commenting on the sentence, Savin that “behind us there are thousands, if not millions, of similar cases which do not get investigated. A Kyiv poet was beaten, and therefore the case was reported by numerous media.”.  Savin added that a few such public cases would deter the thugs.

It was only really in June 2016 that a Gay Pride march took place in Kyiv without any serious incidents, either during the march or later, as participants dispersed.  There had been shocking attacks on 10 participants after the march ended the previous year, with only four men prosecuted and all receiving 2-year suspended sentences.  Savin is quite right that a major problem with all such hate crimes is that the perpetrators believe in their own impunity.

In a recent study, the Kharkiv Institute for Social Research pointed out that LGBT people in Ukraine continue to suffer various forms of discrimination, including, unfortunately, in their encounters with law enforcement officers.

The Institute, together with the Kharkiv Human Rights Protection Group, has been carrying out studies of illegal violence in the police force since 2004.  Although the scale of the problem remains high in general, LGBT people are even more vulnerable.   The survey can be downloaded here.