A person unfolds a poster… 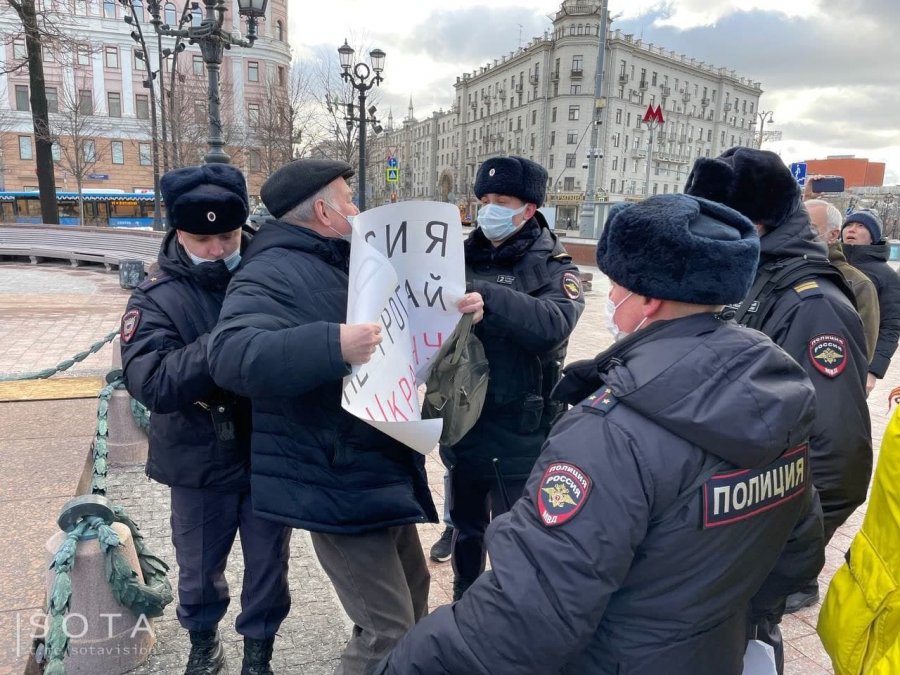 “No to the Kremlin’s war against Ukrainians and Russians!”– an anti-war picket with such poster resulted yesterday, in particular, in the arrest of the vocalist of “Arkadiy Kots” band, Kirill Medvedev, reports Mediazona. He was arrested again several hours later when exiting the police precinct. Two more picketers were detained later. 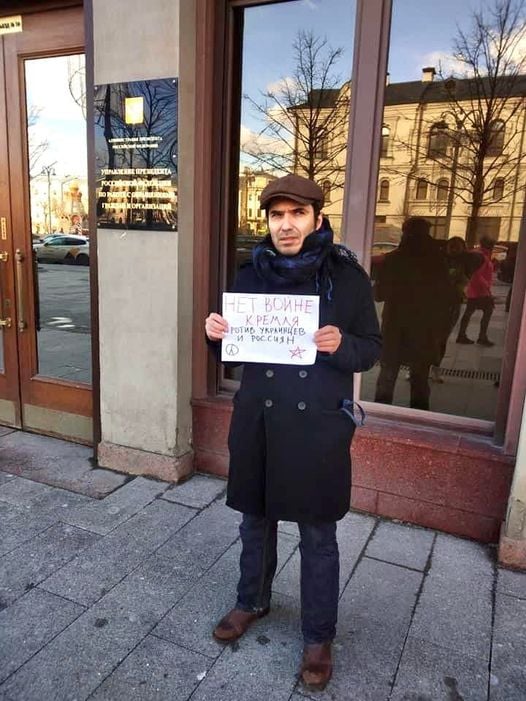 On February 20, several human rights activists who went on one man pickets were detained in Moscow. Among them were Lev Ponomaryov, Mikhail Kriger, Yuriy Samodurov, Olga Mazurova, Mikhail Udimov, Mykola Rekubratsky, Anna Krechetova, Aleksandr Matskevych. They in turns held the posters ”Schools and hospitals instead of bombs and shells”,  “Russia, do not occupy Ukraine”, “Freedom to the Ukrainian political prisoners”. “A person was unfolding a poster near the monument to Pushkin. At once the SERBfighters arrived and began to tear out posters. Right after that the police arrived and dragged the picketer to the paddy wagon”, – states a message on the Facebook page devoted to information support of pickets for the cessation of the Russian-Ukrainian war and the release of Ukrainian political prisoners from Russian prisons. 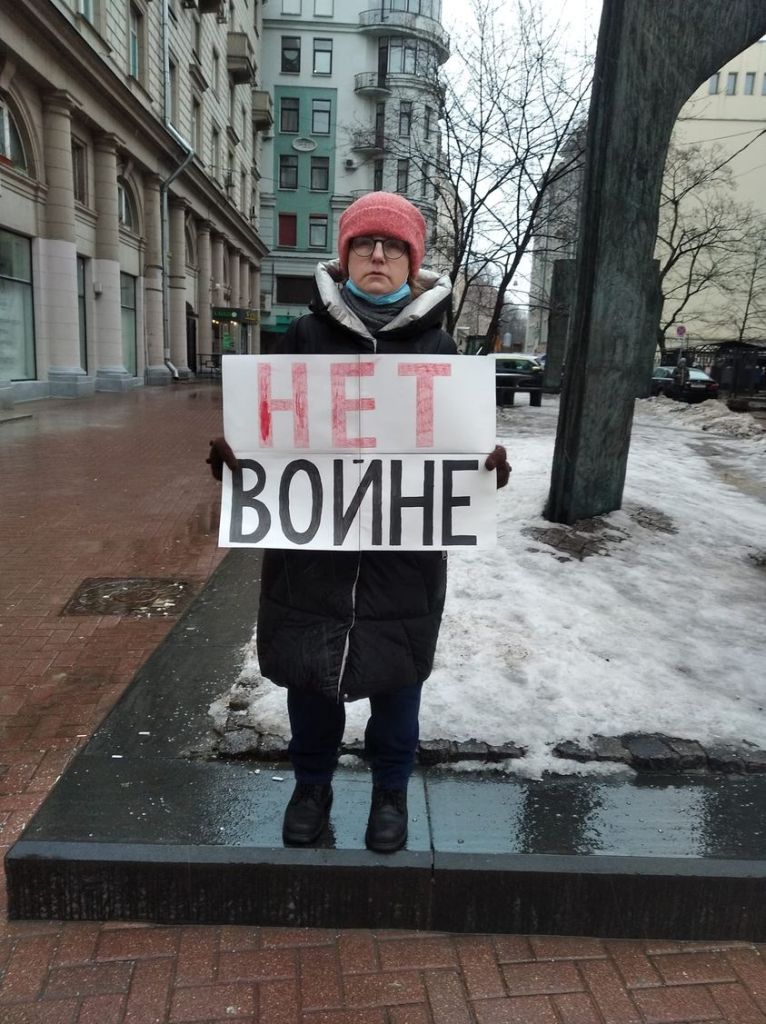 The site nemtsov-most.org gathers the evidence on one-man pickets that took place on February 19 throughout Russia. As we reported, famous Russian public figures and ordinary people signed ”Statement of supporters of peace against the War Party in the Russian leadership”. ”Citizens of Russia essentially becomethe hostages of criminal adventurism, which Russian  foreign policy turns into. They don't just live in uncertainty – whether a great war will start, but also observe a sharp rise in prices and the fall of the national currency. Do Russians need such a policy? Do they want war, and are they ready to bear its burden?Did they give the authorities the right to play like that with their destinies?  – asks the document. – But nobody asks the citizens of Russia. The social discussion is absent. Only one thought is presented on the state TV, and it is a thought of the supporters of the war. The direct military threats, aggression and hatred towards Ukraine, America and the West sound there. But the most dangerous thing is that war is presented as a permissible and inevitable development. People are being deceived, corrupted, the idea of a holy war with the Westinstead of developing the country and raising the living standards of its citizens is imposed of them. The issue of price is not discussed, but it will have to be paid by ordinary people, and this price will be great and bloody”. 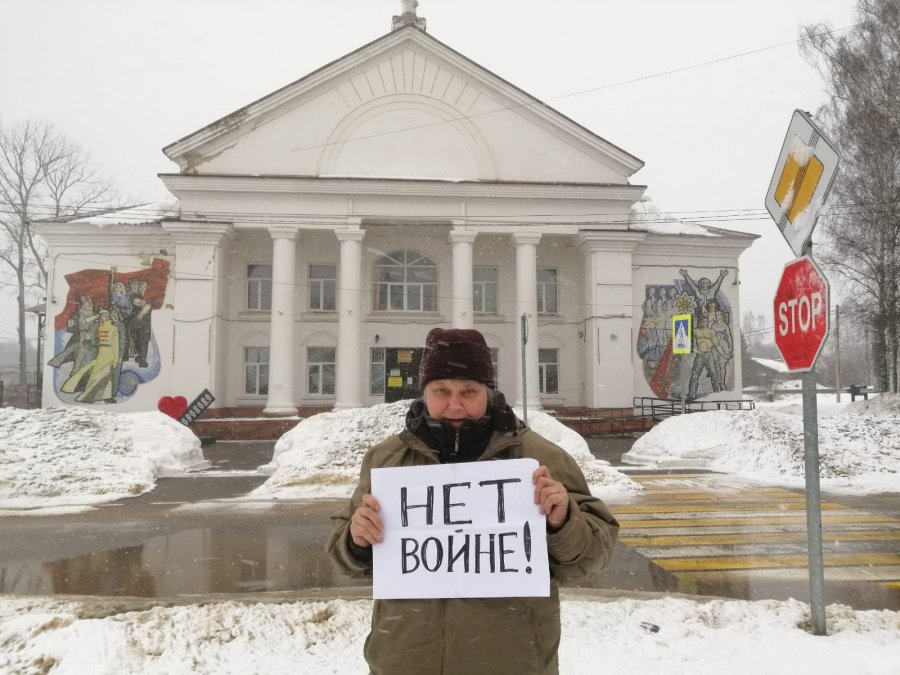 We would like to remind, yesterday, on February 21, the president of the RF Vladimir Putin declared the recognition of independence of so-called “DPR” and “LPR” by Russia. At night it became known about the entry of regular Russian troops in the temporarily uncontrolled territories in eastern Ukraine. According to intelligence, there are more than 140,000 Russian troops near the Russian-Ukrainian border.