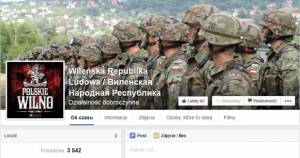 There are increasing signs of plans afoot to use the Polish minority in Lithuania as a destabilizing force, coinciding nicely with an electoral campaign in which the main Polish party has positioned itself as strongly pro-Russian.   Self-proclaimed Vilnius and Lviv ‘people’s republics’, clearly reminiscent of the ‘republics’ in Donbas, may for the moment have been declared only on Facebook, but their appearance has chilled many observers both in Poland and Lithuania.

Piotr Maciążek, a Polish defence analyst believes Moscow is behind developments which include Internet ‘people’s republics’ calling on Poland to send ‘little green men’ [as the Russian soldiers in Crimea were termed] into Lithuania and also attacks on the Polish embassy in Vilnius.  The aim would be to artificially use Polish-Lithuanian relations as a method for destabilizing the entire region.

Of key importance is Russian influence on the political party Akcja Wyborczej Polaków [AWP] in Lithuania, and its leader Waldemar Tomaszewski.  The party has begun closely cooperating with Lithuania’s Russian minority and its members’ utterances are aggressively anti-Ukrainian.  In November 2014, for example, one of the party’s MPs Zbigniew Jedziński called on NATO to bomb Kyiv, claiming that the situation was the same as in 1999 when NATO asserted that Belgrade needed to be bombed to stop the Milosevic government’s violence and repression against Kosovo.  Tomaszewski, the AWL leader, was critical of the protests on Maidan and justified Russia’s annexation of Crimea, claiming the situation to be similar to Kosovo.  He also sports a St George ribbon, the symbol of Russian nationalism particularly favoured by the Kremlin-backed militants in Donbas. Maciążek points to a number of people around Tomaszewski who have close links to the Kremlin.

Lithuanians and Poles were enormously supportive of EuroMaidan and Ukrainian aspirations for closer links to the EU.  Both countries’ leaders have also called for a hard line in the EU over Russia’s aggression against Ukraine and its seizure of Crimea.  It is therefore no wonder that Russia would seek to cultivate links with those in Lithuania willing to take a pro-Moscow line.

More is involved, however, than mere political lobbying, and although there may not be proof of direct Russian involvement, there are enough signs to arouse concern.

At the end of January this year two new ‘people’s republics’ appeared, albeit as ‘cause pages’ on Facebook, with identical wording “demanding that Polish ‘little green men’ be brought into the Vilnius / Lviv regions, and that a referendum be held among the indigenous population.  Both these ‘people’s republics’ - the "Wileńska Republika Ludowa" and the "Lwowska Republika Ludowa" are written in both Polish and Russian, and use photos of Polish soldiers.  There is no indication who is behind them although the language suggests that the authors can either claim Polish as their native tongue or have spent a lot of time in Poland.

The initials for these ‘republics’ are, of course, analogous to those of the so-called Donetsk and Luhansk ‘people’s republics’ in Donbas [DNR and LNR, respectively].  The pro-Russian political party ‘Donetsk Republic’ first appeared in 2005, as did the extreme nationalist and far-right Eurasian Youth Union [ESM from the Russian].  According to Anton Shekhovtsov, ESM was founded by Russian fascist ideologue Alexander Dugin and Vladislav Surkov, with money from the Russian Presidential Administration.  A minimum of five members of the Donetsk Republic party who have since been active in the Kremlin-backed DNR took part in a summer camp organized by Dugin and his ESM where, Shekhovtsov writes, “ultranationalist activists were further indoctrinated and trained to fight against democratic movements in neighbouring independent states”.

A number of Polish observers believe that the far-right Polish Falanga party may be behind the two ‘republics’.  It is clear from the Falanga site Xportal.pl that they are at very least following these Facebook ‘republics’ very closely.  The party’s leader Bartosz Bekier appeared in Donbas in May 2014, supporting the militants.  Shekhovtsov calls the activities of both Bekier and his party a reflection of the extensive cooperation between Putin’s Russia and the European extreme right.

Whoever is behind these sites, they have managed to gain some supporters.  The Lithuanian ‘republic’ has 3, 950 ‘likes’, the other – 2, 330, and both are being maintained.  The amount of work this requires makes it unlikely that some individuals are doing this as a joke.

Michał Potocki writes that among Poles in Lithuania, many of whom feel discriminated against, there is significant support for Russia.  He explains: “Therefore, watching Russian TV, it’s easier for them to believe in stories about Russian-speaking residents of Ukraine being oppressed by ‘fascists from Kyiv’.”

Lithuania is a very small post-Soviet republic, which like Latvia and Estonia, is well-aware that Putin regards the collapse of the USSR to have been “the greatest geopolitical catastrophe of the twentieth century”.  It is equally conscious of the fact that Russia’s flagrant breach of the Budapest Memorandum in annexing Crimea and waging undeclared war in Donbas has been effectively seconded by the other signatories.  Neither the USA nor the United Kingdom has honoured its commitment to protect Ukraine’s sovereignty.

Lithuania is part of NATO, and all NATO members are obliged to respond if any member is attacked.

And if a NATO member is seriously destabilized?  That is already less clear, and with the West still failing to react with adequate firmness to Russia’s aggression, it is hard to imagine any Baltic republic feeling great confidence.  Nothing could be better than another minority taking the apparent lead in calling for changes to borders or status, with Russia able to shrug its shoulders and say that the countries should never have broken away from their multinational ‘union’.

The ‘Polish card’ has, in fact, been tried at least once before.  In April 2014, the Russian newspaper Voice of Russia claimed that Poles in Zhytomir oblast were demanding autonomy.  The numbers stated were wildly improbable and gained no traction.

Nearly a year later Russian aggression against Ukraine has escalated dramatically, and there are increasingly provocative statements and actions against the Baltic republics, Poland, and other European countries.  A Russian TV 5 report that  showed how Russia “could take all of Europe” prompted not laughter, but rather discussion as to how possible this might be.

There is no humour in attempts to play any national minority card, and no mystery as to whose interests are served by such tactics.