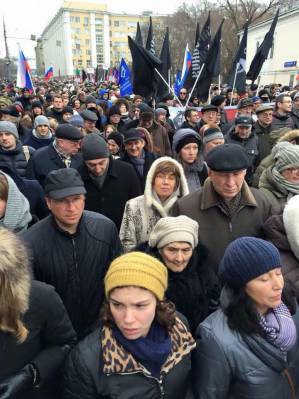 Russian President Vladimir Putin’s telegram to Boris Nemtsov’s mother was probably a good PR move.  For those willing to believe that Putin was not involved in the latest of many killings of his critics over the last 15 years, it could have seemed like a noble gesture.  The telegram, however, also had another message for the wider Russian audience, one with a bad Soviet smell to it.  It was addressed to Dina Yakovlevna Eidman, although Nemtsov’s mother has not used her maiden name since she married 63 years ago, and all her documents are in the name of Nemtseva*  According to Alfred Kokh who visited the family shortly after Nemtsov was gunned down near the Kremlin, Dina Yakovlevna is in no doubt why her maiden name was used, that being to stress that Nemtsov was “really Jewish”. 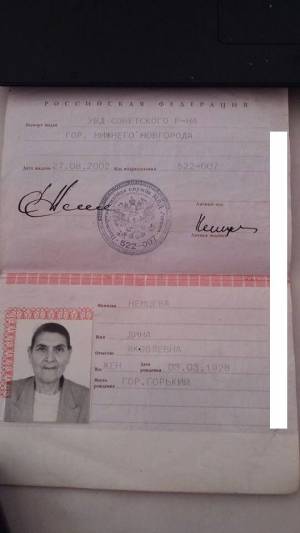 Putin was not alone in using Dina Yakovlevna’s maiden name. We can perhaps be kind and assume that the Russian media have used it because of its mention in an   interview given on Feb 10 when Boris Nemtsov spoke of his mother’s – and his – fear that Putin might have him killed.  In Putin’s case, there is quite simply no excuse.  Nina Yakovlevna will have been under some degree of surveillance for decades: her correct surname was known.

It was done very cleverly.  In the arsenal of grubby innuendo and irrelevant details about his companion used by the pro-Kremlin media to tarnish Nemtsov’s reputation, the standard Soviet technique of adding the ‘Jewish’ name in brackets would have been immediately slammed as anti-Semitic.

This, unfortunately, has been less the case with Ukrainian politics.  Here it is the Kremlin-backed militants in eastern Ukraine and, often, the Russian media who speak of Ukraine’s democratically elected President Petro Poroshenko as  “Poroshenko (Waltsman)”.

The ploy dates back to Soviet times.  By ‘revealing’ a person’s ‘real name’, you can deny anti-Semitic motives and claim concern that the person in question is supposedly hiding something.  On Twitter, Igor Strelkov (/ Girkin), ex-‘defence minister’ of the self-proclaimed ‘Donetsk people’s republic’ and identified by US officials as working for Russia’s GRU military intelligence service, wrote:  “Why do they hide their real names?  Poroshenko – Valtsman; Nemtsov – Eidman ….”

An article published by the ‘Novorossiya’ Central Information Service shortly before Poroshenko received a record absolute majority in the May 25 presidential elections begins by calling Poroshenko Jewish, then saying:

“There’s nothing bad in the fact that a Jew could become president, of course.  For example, in Israel all leaders of the country are Jews and we see that they have a successful state.  But why does Pyotr Valtsman conceal his nationality?  Why does he declare himself a Ukrainian, and a Ukrainian nationalist at that?  Why does he support anti-Semitic nationalists from Right Sector and other nationalist organizations?”

The far-right performed abysmally in the October 2014 parliamentary elections, with neither Right Sector nor VO Svoboda reaching the electoral threshold for entering parliament.  Of the two individual Right Sector candidates elected as MPs, one – Boryslav Bereza – is Jewish.  However, that is really by the way.  Russian aggression and especially its virulent propaganda have had one very positive effect in Ukraine.  With the country’s territorial integrity and sovereignty threatened, assumed divides on ethnic grounds have rightly been minimized.

The same cannot be said of the Kremlin-backed militants in eastern Ukraine, nor of the pro-Kremlin media.

There was outcry in both Ukraine and abroad after the leaders of the so-called Donetsk and Luhansk ‘people’s republics’ were broadcast on Russian television dismissing Ukraine’s new leaders as ‘pathetic Jews’.  The western media who then copy-pasted phrases used on multiple occasions about ‘widespread anti-Semitic sentiments” in Ukraine missed the point entirely.   A quick Google check would have illuminated the situation very clearly.  A year ago Putin tried to justify Russia’s aggression against Ukraine by claiming that ‘fascist anti-Semitic hordes’ had seized power in Kyiv.  His proxies in Donbas clearly have a different view on the matter.  So too do his advisers and the Russian propaganda machine which are dredging out Soviet tactics in their presentation of critics of their aggression, like Boris Nemtsov.