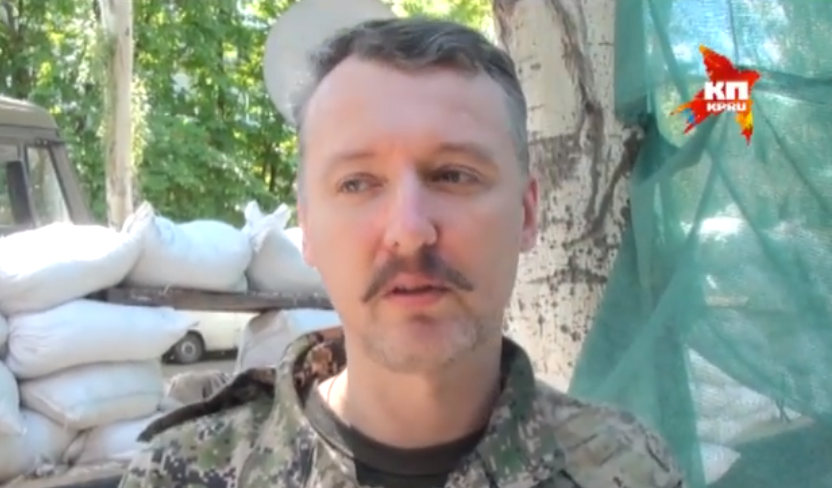 Igor Girkin (Strelkov), the Russian former military intelligence officer who led the seizure of Sloviansk in April 2014, has admitted to using civilians as human shields and exposing them to shelling in 2014.  This is not the only war crime that Girkin acknowledges during this latest interview, in which he gives more details of how he personally decided on targets for extrajudicial killings. Following outrage from Ukrainian journalists, Girkin asserted that all their actions had been justified, and said he regretted only having not killed more Ukrainians.

The interview was given on 24 May and can, at present, still be found here https://youtube.com/watch?v=vn-ztUNkGWk&t=331s  Judging by Girkin’s previous admissions to war crimes, the video may be removed, but copies of relevant parts can be found here and here.

Girkin says that where they tried to fight away from built-up areas, they were defeated.  “Ukrainian military men said to me why are you sitting like cowards, go out into the field, don’t hide behind civilians. Well sorry! Go out into the field to be killed? I’m not Don Quixote, after all!”

It should be stressed that Girkin and his fighters were not just ‘sitting’ behind civilians, they were firing at, and very often killing, Ukrainian soldiers and volunteers.

Girkin was also asked about “rumours” of executions, which Girkin openly acknowledged.  He says that four men were executed, including two leaders of units whose men had, allegedly, committed crimes.  In one of the cases, the ‘platoon leader’ had not known of the crimes, he said, but he was killed anyway, although the actual culprits, he claims, were sent to a punishment division.

Girkin asserts that initially these executions were by ‘sentence’ of what he calls a tribunal, made up of commanders of armed formations, however later they were without any ‘trial’.  There is no indication of whether any of the victims were given a chance to defend themselves, and it was Girkin who effectively decided who should be killed.

He says that “several Ukrainian spies and saboteurs” were killed, without any explanation as to how their decisions were reached.

He did not mention whether Horlivka Councillor Volodymyr Rybak; 19-year-old student Yuri Popravka; and 25-year-old student Yuri Dyakovsky, whose hideously mutilated bodies were found in a river, had been considered ‘spies’ or ‘saboteurs’. All were abducted and murdered by the militants under his control just days after they seized Sloviansk.

There is little that can be called new in the interview. It was certainly known from the outset that the militants were using civilians as human shields.  Indeed, in May 2014, two courageous women in Kramatorsk actually confronted militants telling them to get out of their street and stop putting their children in danger.  They were forced to flee as punishment for their courage.

Russia was also well-aware of how the Russian and pro-Russian militants it was heavily arming and financing were using civilians.  Such methods were, in fact, useful for Russian propaganda which made no mention of the fact that the militants were shelling Ukrainian positions from residential areas, shouting only if Ukrainian soldiers returned fire.

The first evidence of extrajudicial killings was reported by western journalists after Girkin and his men were forced to retreat from Sloviansk in early July. It was after that and some other defeats, that Russia stopped relying on formally retired spetsnaz officers like Girkin and mercenaries and began deploying its own soldiers with its first military losses believed to have been at the end of August.

At the beginning of August 2014, Igor Druz, a senior aide to Girkin confirmed to the BBC that militants had executed people in Sloviansk.  He claimed that a number of people had been killed “to prevent chaos”.

Girkin may have left Russia’s military intelligence service [GRU] in 2013, but it is difficult to view this ‘retirement’ as unrelated to his subsequent actions.  While Russia is still trying to claim that it is not a party to the war in Donbas, it was unable to keep denying its role in Crimea.  Girkin is rightly under EU sanctions to this day over his role,  as leader of the paramilitaries who helped Russian soldiers without insignia take control, in Russia’s invasion and annexation of Crimea.  He arrived in Donbas on 12 April 2014, with around 50 heavily armed men, who had come from Crimea, via Russia.  It is simply inconceivable that this was not supported, if not directly organized and controlled, by Moscow.

In March 2016, Girkin made another public admission to having ordered extrajudicial killings during an interview to the Russian publication Komsomolskaya Pravda.  The interview was removed, presumably after enough commentators noted that Girkin had publicly confessed to war crimes.

In it, Girkin was asked how they had combated looting, and answered “through executions”, using legislation on ‘military courts’ introduced by Soviet dictator Joseph Stalin in 1941. He admitted to four such executions in Sloviansk, with one person having been “an ideological supporter” of the Ukrainian nationalist ‘Right Sector’. It is possible that Girkin mentions four in the knowledge that there is written evidence of four executions since in the 24 May interview, he certainly uses words that suggest a higher number of executions.

The Komsomolskaya Pravda URL now contains a quite different text, however the interview was very widely reported, and doubtless safely recorded as evidence for the International Criminal Court at the Hague.

The interview prompted a St. Petersburg lawyer, Arkady Chaplygin, to formally demand that Russia initiate criminal proceedings against Girkin for committing what were undoubtedly war crimes in eastern Ukraine.

It was a courageous move, but one that was clearly ignored by the Russian authorities.  Girkin freely moves around Russia, confident in the knowledge that he will never be handed over to Ukraine or to the Court in the Hague.  It is possible that his openness regarding war crimes and the war in Donbas is deliberate policy aimed at protecting his own skin. A very large number of the militants have died violent deaths not linked to the fighting, and the suspicion does arise that they have been removed because of all that they could divulge.  While careful to follow Moscow’s narrative on the Kremlin’s most sensitive points (“all volunteers” and “the majority were Ukrainian”), Girkin appears to divulge everything and does it with total impunity.