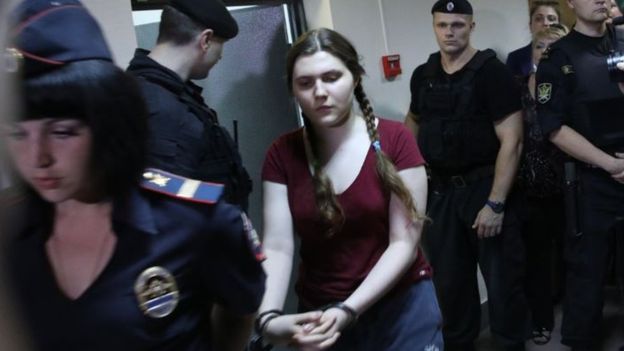 A prosecution witness in Russia’s trial of 10 young people who chatted about politics and life on Telegram has stated in court that he gave false testimony under pressure.  Pavel Rebrovsky also confirmed that the real organizer of the supposed ‘extremist group’ was a man believed to have been an FSB provocateur.  The dramatic retraction comes a month after the families of the other defendants reported that this FSB infiltrator  had disappeared from the indictment although the charges against the others would not have arisen without the pivotal role that he played.

Rebrovsky is serving a 2.5 year sentence on lesser charges laid after he agreed to ‘cooperate’ with the prosecution.  For signing documents thrust in front of him, he says, he was promised a suspended sentence.  He was told that if he didn’t testify against himself and the others, he would face ‘terrorism’ charges.  He doubtless feels aggrieved that he instead received a real sentence, however the move still took courage given that he is very likely to face reprisals from the FSB.

His retraction on 8 July is of great importance since the prosecution has nothing at all against the 10 young people, including two teenage girls, except activities initiated and organized by the person whom they knew as ‘Ruslan D’.

During the latest hearing at the Liublinsky District Court in Moscow, Rebrovsky stated that none of the defendants had planned any explosions, Molotov cocktail attacks or other radical actions and that “all of this was thought up by the investigator”.  He had earlier signed supposed ‘confessions’ in which it was asserted that he and the other defendants had been planning to carry out acts of sabotage, attack police stations and set fire to district administrations.

Nikolai Fomin, lawyer of the youngest of the defendants, Anna Pavlikova, who was just 17 when arrested, says that Rebrovsky told the court that there had never been any extremist group at all. Yes, they had discussed political, social and economic issues, but there had never been any suggestion of overthrowing the regime; of any kind of violence against police or other law enforcement bodies.

The methods used in this case have become all too familiar for Ukrainians since 2014.  Russia’s ‘case’, for example, against Ukrainian filmmaker Oleg Sentsov and civic activist Oleksandr Kolchenko was based solely on the testimony of two other men who had been held incommunicado, without lawyers, for three weeks.  One of the two, Gennady Afanasyev later found the courage in court to retract his testimony and say that it had been extracted under torture.

In the ‘Novoye Velichiye’ case, the testimony signed by Rebrovsky and one other person, Rustam Rustamov, was not just important because of the lack of any real evidence.  Rebrovsky’s testimony was also needed to try to minimize the role of the believed FSB infiltrator – Ruslan Danilov, who initially appeared in the indictment under the name Alexander Konstantinov.  Rebrovsky had earlier signed testimony saying that Danilov was not an FSB employee and had not taken an active part in the supposed movement.  He had earlier claimed instead that the leaders of the ‘organization’ had been the two teenage girls – Anna Pavlikova and Maria Dubovik, as well as Ruslan Kostylenkov.

All of this has now been retracted, with Rebrovsky instead saying that all the other participants in the group had been “passive” by comparison with Danilov, whom Rebrovsky says was like “the grey cardinal of the organization” who constantly tried to push various radical actions.

Rebrovsky was not asked about who initiated the first meeting in person of the small group of people chatting on Telegram in November 2017, however he confirmed that it was Danilov who proposed and pushed through all the elements set out in a Supreme Court decision regarding court practice regarding ‘extremism’ charges.

It was Danilov who not only initiated, but also rented the premises that this ‘group’ used for the extremely small number of meetings they held.  It was he who proposed buying a printer, despite the lack of any real need, and who proposed and drew up a group ‘charter’. All the defendants confirm that it was Danilov who proposed creating structural subdivisions with individuals responsible for a particular area.  Such delineation, according to the Supreme Court document, made it possible for the prosecution to treat all members of these meetings as ‘organizers of an extremist group’.  ‘Organizers’ face a sentence of from 6 to 10 years under Article 282.1 § 1 of Russia’s criminal code, as opposed to ‘participants’ who would get a sentence of up to six years.

It was also Danilov who insisted that their group needed a name, and came up with the somewhat ridiculous ‘Novoye Velichiye’ [‘New Majesty / Greatness’].

Despite all such efforts by the infiltrator, everything about this ‘group’, which never mustered more than 20 people was extremely modest.  Rebrovsky mentions that group members took part in two major demonstrations – on 28 January 2018 in support of fair elections and a Nemtsov rally (presumably on the anniversary of implacable Kremlin critic Boris Nemtsov’s assassination close to the Kremlin on 27 February 2017).  Asked what they had done there, Rebrovsky answers tat they changed   They had also circulated entirely innocuous flyers, saying: “We’re not cattle – boycott the elections’ and “They steal, and you sit and believe them”.

Rebrovsky was asked by the prosecutor if there were any plans to obtain weapons or protective means.  He answered that he had only heard such proposals – to get helmets, some protective gear and batons from Danilov.

Importantly, he also stated that Danilov had given instructions to Ruslan Kostylenkov, whom the prosecution is claiming was the organizer of ‘Novoye Velichiye’.

This ‘group’, despite Danilov’s efforts fizzled with the last meeting, on 8 March held to discuss dissolving it.  The ‘organization’ was breaking up and there were political differences between its nominal members.

With effectively all defendants, except the one person who received a short suspended sentence for his testimony, confirming that it was ‘Ruslan Danilov, otherwise identified as  Alexander Andreevich Konstantinov who was the initiator and leader of the tiny group, it is clearly suspicious that he has been erased from the case.  He was earlier presented as somebody who had just turned up at the Investigative Committee in March to inform them of the ‘organization’.  According to this narrative line, he had “understood their possible illegal activities” and decided to follow them. This was evidently not the case.

Four young men and two teenage girls, Maria Dubovik (then 18) and Anna Pavlikova who only turned 18 in prison, were arrested on 16 March 2018.  The two young women were finally released under house arrest after considerable publicity, however

All are charged under both parts 1 (creation and management of an extremist organization) and 2 (involvement in such an organization of Article 282.1 of Russia’s criminal code.

Nine of the ten were added to Russia’s notorious ‘List of Terrorists and Extremists’ in June 2019.

All have been recognized as political prisoners by the Memorial Human Rights Centre.