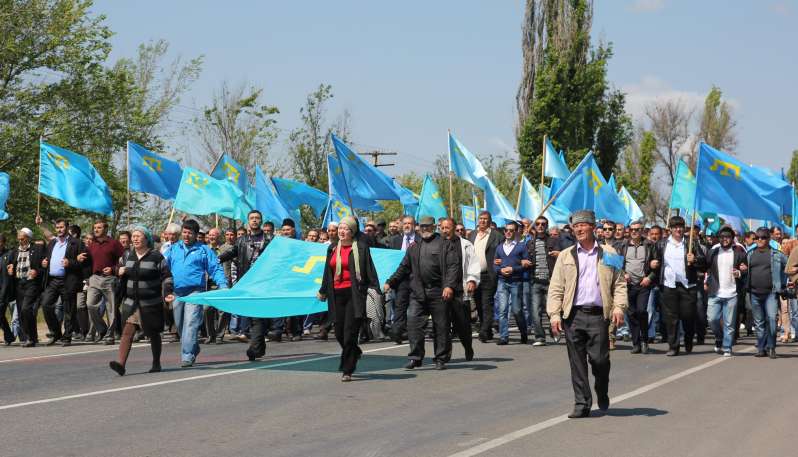 The Mejlis of the Crimean Tatar people has set dates for its March of Dignity against Violence and Occupation from mainland Ukraine to Russian-occupied Crimea and is calling on diplomats and representatives of international organizations to join them in their non-violent return to their homeland.  Support from the international community is vital since there have already been threats of a “harsh”, and almost certainly violent, response from the occupation regime.

Refat Chubarov, Chairperson of the Mejlis [the self-governing body of the Crimean Tatar people], first announced the plans for a march back on 6 December, and on 22 January informed that it would take place on 2-3 May 2020.  This is an act of non-violent resistance which they are holding so that international bodies which are consistent in verbally condemning Russia’s annexation of Crimea, can confirm this condemnation in action.

In a later statement, he points out that “the UN General Assembly has already passed six resolutions; the European Parliament which we are not a member of has still adopted loads of appeals; declarations and resolutions. A package of sanctions over Crimea has been adopted.”

Such decisions were taken in support of Ukraine’s sovereignty and political independence, as well as in defence of the rights and liberties of Crimean Tatars and ethnic Ukrainians living in Crimea. The problem is that “these decisions cannot be implemented by themselves.  Russia totally ignores them and international organizations do not have the possibility of implementing them”.

“Someone has to put an end to this, someone has to say “Stop!”, he insists.  Their non-violent action is aimed at helping international bodies and organizations implement their decisions and resolutions on occupied Crimea.  It should become the impetus to the fulfilment of international decisions, and the organizers are therefore inviting all Ukrainians, not only Crimean Tatars, and representatives of international rights organizations to take part.  He specifically invites members of the Parliamentary Assembly of the Council of Europe, and the Parliamentary Assembly of the OSCE, as well as other bodies.  In this way they can uphold the principles that they rightly espouse.

“We would respectfully ask you on these days to come to Ukraine and together with us - Crimean Tatars and other Ukrainians, let us foster implementation of these decisions which you have been adopting for almost six years. Let us, together with you, go to Crimea, to that territory which you and we regard, in accordance with international law, in accordance with the rights of Ukraine, as Ukrainian territory”.

The Mejlis will also be sending personal invitations to members of international organizations.”   They can visit those people who are awaiting for the reinstatement of Ukraine’s sovereignty, Chubarov adds.

This march, he stresses, is primarily “aimed at ensuring that the entire world sees that we Ukrainians, citizens of all nationals are intent upon reuniting our land, occupied by the Russian Federation in 2014.”

This is a totally peaceful march.  They are not seeking to reunite Ukrainian territory with arms, only through insistence on implementation of international resolutions.

The March of Dignity will be led by members of the Mejlis, Ukrainian MPs, as well as western partners.  Chubarov is aware that the occupation regime will seek to prevent them from entering Crimea, so in this sense the action must be one of active, although non-violent, resistance.

In his address on 26 January, Chubarov mentioned just some of the ongoing grave human rights violations and ever-increasing number of political prisoners.  The repression, he said, is aimed at intimidating Crimean Tatars and ethnic Ukrainians and forcing them to leave Crimea.  At the same time, Russia is bringing in large numbers of its own people – another crime under international law.

There has already been a response from Sergei Aksyonov, the Russian-installed ‘leader’ of Crimea.   He alleged that this would be an “illegal crossing of the border, an attempt to invade Russian territory”, and “provocation” and threatened a harsh reaction.

It is certainly vital that Ukraine’s international partners and those who believe that international law must be upheld are present as Russia has already demonstrated on many occasions the violence it is willing to use.  The March is scheduled for the sixth anniversary of Russia’s extraordinary ban against the world-renowned veteran leader of the Crimean Tatar people and former Soviet political prisoner, Mustafa Dzhemilev.  The ban, initially for five years, was imposed after Mustafa Dzhemilev arrived in Simferopol in April 2014, for the first time since Russia’s invasion, and insisted that the Ukrainian flag be reinstated on the building of the Mejlis headquarters.  On 3 May 2014, around five thousand Crimean Tatars arrived at the Armyansk administrative border to greet the veteran leader and escort him into Crimea.  They were confronted by a huge contingent of armed OMON riot police, soldiers and other Russian enforcement officers and in the end Mustafa Dzhemilev returned to Kyiv, fearing that there would otherwise be bloodshed.

Russia has repeatedly behaved in appalling fashion, including through its ban on remembrance gatherings on the 70th anniversary of the Crimean Tatar Deportation on 18 May 2014 (and ever since).  It seems likely that it wanted violence in order to try to justify a bloody crackdown.

The Crimean Tatars, led by the Mejlis, have remained steadfast in their commitment to non-violent resistance and have suffered particularly ferocious oppression over the past six years.   They need and deserve the support of the international community.