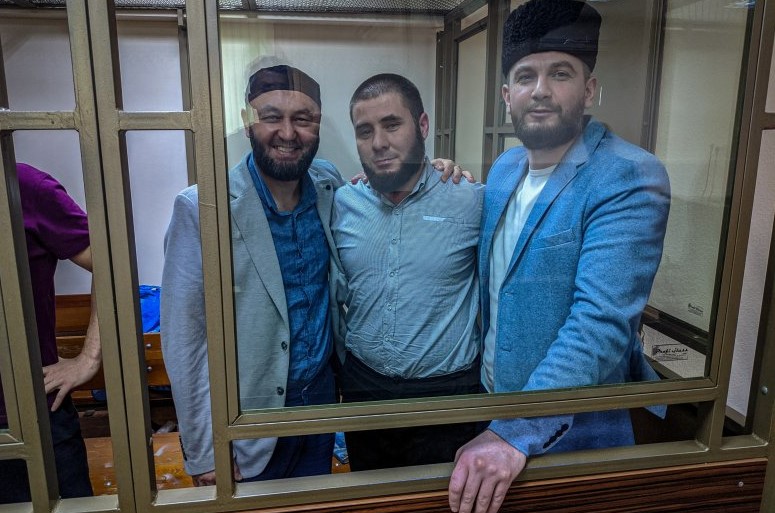 During the course of the last court hearings in May, three ‘prosecution witnesses’ in Russia’s trial of eight Ukrainian political prisoners gave testimony against the prosecution, including one who testified in court that he did not know the defendants at all.  Unfortunately, similar bleeps in Russia’s previous trials of Ukrainian political prisoners, including that of filmmaker Oleg Sentsov, have not prevented the same military court in Rostov from passing 20-year sentences.  They do, nonetheless, demonstrate the flawed nature of the ‘trials’, and are cheering, given that the men who refused to give false testimony did so in the knowledge that they could face reprisals from Russia’s FSB.

On 27 May, Arsen Ganiev, a Bakhchysarai businessman, stated clearly in court and reiterated that he did not know the defendants.  The prosecutor, Yevgeny Kolpikov was clearly put out, and annoyed at the ripple of laughter from the box in which the eight defendants are forced to take part.  It seems that Ganiev had met Marlen (Suleyman) Asanov, but once, and had not communicated in any depth, and was baffled to be called in as a witness.  The only contact with him, he said, had been ‘a chat’ with FSB officer Dmitry Gramashov, and he had not been informed that this was ‘witness testimony’ and that he would be summoned to the court. Even if, in the course of that ‘chat’, he really did say that Asanov’s views seemed close to those of Hizb ut-Tahrir, he had already made it clear how superficial and fleeting the acquaintance had been.  This would doubtless have been stressed by the defence had they been allowed to ask questions after Ganiev confirmed the authenticity of the signature he had not recalled even giving.  There was no good reason for the refusal to allow this by presiding judge Rizvan Zubairov but that is also typical of these trials.

Kolpikov tried to drag the procedure out by asking irrelevant questions about Hizb ut-Tahrir, the peaceful pan-Islamist movement which is legal in Ukraine and most countries.  Russia is the only country in the world to have labelled it ‘terrorist’ and is now using that label in this and other cases to justify ‘terrorism’ charges against Crimean Tatars, most of them civic journalists and activists, from occupied Crimea.

These ‘trials’ are used to imprison men for 10-20 years for nothing even remoting resembling a crime, and without any real evidence even of the impugned ‘involvement’ in Hizb ut-Tahrir.  Presumably the lack of proof was the reason that the ‘investigators’ went for bulk in the hope that the number of supposed ‘witnesses’ would create an impression.

On 28 May, the Imam of the Bakhchysarai District, Ramazan Asanov was also called in, supposedly as a prosecution witness.

Marlen (Suleyman) Asanov had visited his mosque twice, and the Imam had been in the Salachik restaurant that Asanov owned a couple of times.  They knew each other well enough to say hello in the mosque, no more.  He knew nothing about any ‘Hizb ut-Tahrir group’ that the prosecution is claiming Asanov had organized.  If he did so, the Imam said, it was in secret.

Once again the court acted on the side of the prosecutor, allowing him to repeat questions about Hizb ut-Tahrir, even though the answer had been given, and to ask about other political prisoners who are not involved in this case.

The same continued with respect to all of the defendants, with the Imam having absolutely nothing incriminating to say about any of them.  It was telling that the only thing that he knew about Server Mustafayev was his involvement in Crimean Solidarity, the civic initiative helping political prisoners and their families, and reporting on political repression in occupied Crimea.

In the case of Ernes Ametov, the Imam positively said that he did not think Ametov was involved in Hizb ut-Tahrir, that he had taken part in the Muftiate’s events and that his wife had brought their child to the mosque.  He had, in fact, gone to the FSB to specifically state that Ametov was not in Hizb ut-Tahrir.  He called the Ametov family “good and kind people”, with similar characteristics for all of the men with whom he was in any way acquainted.

The Imam also said that he had never experienced any pressure or received any threats from the defendants or their families. This is important since the FSB makes up for the lack of evidence from such open witnesses by using so-called ‘secret witnesses’.  Their identity is concealed from the defence and their testimony is effectively impossible to verify.  The defence has, however, consistently demonstrated that men who apparently ‘remember’ entire statements made by one or other of the defendants in such trials, do not remember the most basic of details about the premises that they were allegedly in when these were heard.  It is assumed that such alleged ‘witnesses’ are often FSB officers, or people who have been threatened with imprisonment if they do not agree to give false testimony..

During the hearing on 20 May, the Imam from the Khan’s Mosque in Bakhchysarai also stated that he had not seen anything dangerous and had never received any threats. It can only be guessed why he had signed a protocol saying something else during an interrogation.  During the hearing, the judge became annoyed with the defendants for, very understandably, wishing to clarify such discrepancies, and three of the men were, separately, removed from the hearing.

The trial underway at the Southern District Military Court in Rostov (Russia) is the first where virtually all of the defendants are civic journalists and / or activists, particularly from Crimean Solidarity.

Six men were arrested on 11 October 2017 after armed searches that found nothing but some religious literature.  Initially only Marlen (Suleyman) Asanov was  designated the role of ‘organizer’ of a Hizb ut-Tahrir ‘cell’ (under Article 205.5 § 1 of Russia’s criminal code), with this carrying a sentence of up to life imprisonment. The other five men:  Ernest Ametov;  Memet Belyalov; Timur Ibragimov; Seiran Saliyev and Server Zekiryaev were charged with ‘involvement’ in this  (under Article 205.5 § 2 – from 10 to 20 years’ imprisonment). In February 2019, for no obvious reason, the FSB decided to lay the harsher charges against Belyalov and Ibragimov as well.

Further confirmation that this was an attack on Crimean Solidarity came on 21 May 2018 with the arrest of Crimean Solidarity Coordinator Server Mustafayev and Edem Smailov, both of whom are charged with ‘involvement’ in a Hizb ut-Tahrir group.

All eight men were informed on 22 February 2019 of an additional charge – under Article 278 of Russia’s criminal code (‘planning a violent seizure of power’).  This new charge is not based on any evidence about the men and simply follows from the Supreme Court’s unexplained ruling in 2003 finding Hizb ut-Tahrir ‘terrorist’.

The Russian Memorial Human Rights Centre has pointed to evidence that the FSB applies this extra charge in cases where men refuse to ‘admit guilt’. In not one of the ever-mounting  prosecutions in occupied Crimea on trumped-up ‘terrorism’ charges based on unproven involvement in Hizb ut-Tahrir have any of the men arrested agreed to ‘cooperate’ with the investigators.  It has now become standard for the country which invaded and annexed Crimea, to accuse these totally peaceful Ukrainian Muslims of planning a violent seizure of power.