International Criminal Court finds grounds to investigate war crimes in occupied Crimea and DonbasRussia actively used human shields and committed other war crimes in its annexation of CrimeaCrucial victory for Ukraine in ECHR case against Russia over Crimea Bandera. An Invitation to a Calmer ConversationKey insurgent admits there was no civil war, just Russian aggression A brief description of the KHPG strategic litigations in July–December 2020Ukrainians forced to take Russian citizenship, or lose their homes in occupied Crimea Moscow’s proxy ‘republics’ announce that Donbas is and always was ‘Russian’Russian propagandist seized by Donetsk militants ‘for spying for Ukraine’ Agonizing silence about Ukrainian sportsman abducted by Russian military in DebaltseveThe practice of application of Article 111 of the Criminal Code of UkrainePutin threatens to increase Russia’s ‘support’ for occupied DonbasMPs challenged to fight Russian repression by adopting a Ukrainian political prisonerInternational Criminal Court finds grounds to investigate war crimes in occupied Crimea and DonbasRussia passes grotesque 19-year sentence against head of Crimean Tatar TV ATRCzech gets 3-year sentence for fighting in Donbas on side of Russian-controlled militantsCrimean children taught that Russia didn’t invade Crimea and that Ukraine was an accidentModel concentration camp deployed in Russia for Putin regime’s rewriting of historyNo end to Russia’s revenge for Ukraine’s Revolution of DignityRussia instils ‘patriotism’ in occupied Crimea with automatic rifles and propaganda
• Topics / Terrorism 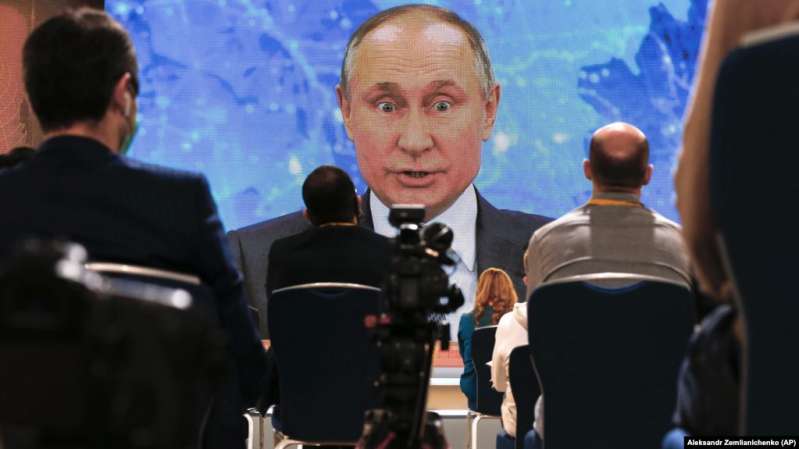 A week after the Chief Prosecutor of the International Criminal Court announced grounds for investigating war crimes and crimes against humanity on occupied Ukrainian territory, Russian President Vladimir Putin has threatened a further build-up in what he termed ‘support’ for Russia’s proxy Donbas ‘republics’.  Such ‘support’ since 2014 has resulted in the Russian and Russian-controlled armed formations having vast stockpiles of tanks and other military hardware.

Russia has, of course, always denied any military involvement in eastern Ukraine, and has particular reason to do so, given the claims now against it in international courts over the downing on 17 July 2014 of Malaysian airliner MH17 by a Russian BUK missile from  Russia’s 53rd Anti-Aircraft Missile brigade.   During his annual press conference on 17 December 2020, Putin spoke only of other ‘support’.

“As we, Russia, supported Donbas, so we will continue to support it. We will even increase our support for Donbas. That concerns support of production, and resolving social issues, and questions of an infrastructure nature, and so forth”.

Putin then went on to accuse Ukraine of failing to fulfil the Minsk Accords and other familiar refrains.  The claim about Minsk comes as both Russia and its proxy ‘Donetsk and Luhansk people’s republics’ refuse to comply with a major commitment of those Accords, namely the release of prisoners on an ‘all for all basis’.  In fact, they are refusing to make any exchange at all, with the excuse presented by the so-called ‘republics’ totally absurd.  They are claiming that the reason is that Ukraine has not wiped the slate clean from a procedural point in the case of 9 people whom it released and handed over to the militants in the last exchange.  It is not clear whom they have in mind, however Serhiy Harmash from the Ukrainian delegation at the Trilateral Contact Group says that the men’s whereabouts are unknown even to their lawyers, and without their consent and presence, it is not possible to meet the militants’ demand.  There would certainly be other arguments against, for example, withdrawing charges against the former Berkut officers accusing of mass murder on Maidan, however the reason does, in any case, seem a pretext for blocking any exchange, with that decision certainly coming from Russia.  The latter, incidentally, has not ‘wiped any slates clean’, despite the men it released in September 2019 having been political prisoners and POWs illegally facing criminal charges.

With respect to Russia’s ‘support’ for its proxy ‘republics’ in Donbas, this has nothing to do with encouraging any real autonomy.  Essentially the opposite, with mines in Donbas having been closed with no attempt to either ensure that they do not pose a serious environmental hazard, or to find other work for miners.  The latter are, presumably, seen as a source of cheap labour in Russia itself, while also increasing the potential problems for Kyiv.

Starting from April 2019, the Kremlin has made it easy for Ukrainians, first in occupied Donbas, then anywhere in Donbas, to obtain Russian citizenship.  This has been internationally recognized as a further hostile act against Ukraine, though one that appears to have largely backfired, with the popularity for such illegal passports far lower than they had predicted.

Russia has never formally recognized the supposed ‘republics’ that it controls, and, despite the issuing of passports, does not seem to plan to do so. If it can manage to push through ‘elections’ and install Russian-loyal functionaries, it will be pleased, but Putin is probably happy enough to retain the status quo, with the conflict in Donbas destabilizing Ukraine, while raising a new generation being fed on pro-Russian, anti-Ukrainian propaganda.  With no free press and with it dangerous to in any way express pro-Ukrainian views, there is little to counter the propaganda that children are being subjected to.  Russia’s claim to have nothing to do with this is hardly credible when exactly the same methods of indoctrination are being applied in occupied Donbas and Crimea.

Russia is, undoubtedly, financially propping up the so-called leadership of these unrecognized ‘republics’, as well as sending its people to fill certain important posts.  The main ‘support’, however, in 2014 and since then has been military.

This has been acknowledged by virtually all the main Russian or pro-Russian militants.  Sometimes they use euphemistic phrases, like Alexander Borodai’s explanation of what they owe to Putin’s “decisions and actions”.  Others are more blunt, like neo-Nazi fighter Alexander Zhuchkovsky.

Back in August 2014, when the Ukrainian Army seemed on the point of defeating the militants, Moscow was seen and filmed sending vast amounts of military hardware and men to Donbas.  The first Russian military deaths were reported by independent media shortly afterwards, though Putin fairly swiftly issued a decree and then other measures to conceal Russia’s undeclared warfare against Ukraine.

In general, Russia has taken measures to maintain its fiction regarding supposed lack of military involvement in Donbas.  In July 2014, it made sure to strictly limit the scope of the OSCE Observer Mission at Russian Checkpoints Gukovo and [Russian] Donetsk.  This mission has been issuing reports ever since about the very limited area that it has been mandated to monitor (see: Russian tanks entering Ukraine that the OSCE is mandated to miss ).

Drones have, fortunately, proven harder to mandate, and the OSCE Special Monitoring Mission fairly regularly reports sightings of Russian military trucks travelling across the border into or from militant-controlled Donbas by dirt roads at night.  Such sightings have only hit the headlines when the militants shoot down the drones, though there is no good explanation for travelling by night in this way unless you have something to hide (details here).