Russian occupiers of Crimea want the UN to force Ukraine to give them waterUkraine may wake to find Zelensky has capitulated to Russia on water to CrimeaStark warning that Russia could use military force to get water for occupied CrimeaUkraine will give Crimea away forever if it starts selling water to its Russian occupiersBy renewing water supplies to Crimea, Ukraine would make Russia’s illegal occupation permanentThreats of prosecution to silence protest over new toxic emissions from Crimean Titanium factoryCrimean Chemical Disaster will happen again while Ukraine helps oligarch Firtash bypass sanctionsFactory behind Crimea Chemical Disaster in Armyansk demands Russia prosecutes UkraineCrimea Chemical Disaster – Russia takes 2 weeks to evacuate children amid information vacuumRussia’s Crimea Bridge Could Collapse AnytimePutin’s Kerch Bridge to Crimea: No Money, Dodgy Insurance & No AccountabilityRussia’s Bridge to Crimea: Quick Profits for Putin’s Crony, Zero AccountabilityRussian NGO in trouble for warning tourists about risks of visiting occupied CrimeaUkraine makes first arrest of boat illegally entering Crimean portGermans ignore international embargo against Russian-occupied CrimeaUkraine can demand the arrest of ships which enter Crimean portsTransport blockade can help return Crimea to UkraineECHR could take years to reach judgement on annexation of the CrimeaSilence over Repression of Crimean Tatar LeaderRussia resurrects Soviet ways in treatment of the Crimean Tatars
• Topics / Human Rights Abuses in Russian-occupied Crimea
• Topics / Politics and human rights 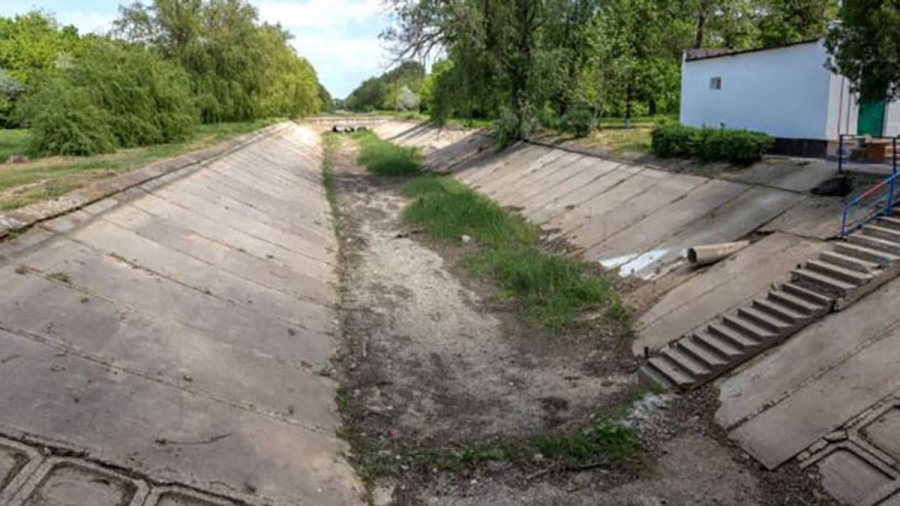 Russia undoubtedly wants a scapegoat for its inability, seven years after its invasion,  to provide water to occupied Crimea, but blaming Ukraine does take gall.  Blustering threats and absurd claims about ‘Ukraine’s violations’ are by no means new, but this time the invaders are planning ‘law suits’, with these first passing through Russian courts which can be relied upon to provide the rulings required, however surreal.

The Russian occupation regime like to use the term ‘water blockade’, presumably hoping that its audience can be conned into believing that Ukraine is blocking something that is ‘rightfully Russia’s’.  Up till 2014, Crimea received around 85% of its water supplies from the Dnipro River in mainland Ukraine via the North Crimean Canal.  Since Russia was illegally occupying Crimea and even claiming it to be ‘Russian territory’, Kyiv quite correctly stopped these water supplies in April 2014, and the canal is now totally dry and unused.

Vladimir Konstantinov, a Ukrainian citizen but now speaker of the Russian-controlled ‘Crimean parliament’, told journalists on 10 March that they are planning “a law suit against Ukraine due to the losses caused to the peninsula by the water brigade”. TASS quotes Konstantinov as making the following, rather blurred, threats: “We must first prove in our Russian courts . <> Then later we will appeal to international norms. There will come a moment when we will be able to present these suits in full measure.  This is the beginning of considerable work on litigation since following it, there will be the energy blockade and the transport blockade.  These are billions which we were forced to spend and will still spend.”

He acknowledged that such a court litigation “in the first instance is of moral significance”, however he called on his ‘parliamentary’ colleagues to ensure that the relative committees estimated the losses from the closure of the North Crimean Canal for the environment; agriculture and Crimean businesses, as well as for Crimeans’ health.   He even asked representatives of the de facto prosecutor’s office’ to establish “those who bear personal liability” and spoke of ‘pseudo-Crimeans’ who had exerted a lot of effort to get the flow of water stopped.

It is certainly true that there are a number of prominent Crimean Tatars and other Ukrainians from Crimea who have stressed the critical importance of not providing any water until Russia ends its occupation.  There was considerable alarmv during the first year of Volodymyr Zelensky’s presidency when, on several occasions, prominent figures and politicians from Zelensky’s Servant of the People party suggested scenarios involving the renewal of water supplies.  If, as seems likely, the aim was to test public opinion, the result should have laid this subject to rest, as there is very strong opposition to any such move.

Reinstatement of water supplies while Crimea remains under Russian occupation would effectively legitimize Russia’s illegal land-grab and would, in all likelihood, make it permanent.  Russia’s assiduous attempts to push a narrative which presents Crimea as historically always ‘Russian’ is wrong on all fronts, including geography.  Crimea is an organic part of Ukraine, not of Russia.  Moscow has built an illegal bridge, but even if this does not, as feared, collapse, there are huge problems with a land-grab serviced via a bridge.  Siemens’ shameful collaboration with Russia, in contravention of sanctions, has for a while enabled the occupation regime to provide electricity, although it is unclear for how long.

Moscow was, presumably, always counting on using political pressure or even military aggression to force Kyiv to back up its occupation regime with water.  Alone it is unable to provide this water, although until recently most Ukrainian experts saw the problems being for agriculture and industry, rather than for Crimeans’ domestic requirements.  The near drought conditions of the past year exacerbated the problem, with many reservoirs and lakes having either totally or nearly dried up and restrictions being applied.

How much the present difficulties are caused (over and above Russia’s occupation) by weather conditions is, in fact, debatable. Moscow has not maintained the infrastructure needed, for example, to ensure that rainwater is not lost,  and has shown itself to be much more interested in creating new buildings, etc. for the military and enforcement officers it is bringing to Crimea. Award-winning film director Akhtem Seitablayev is not alone in believing that the shortage of drinking water is directly linked with the massive increase in the number of Russian military bases.

Although Moscow’s main plans for Crimea doubtless always revolved around its massive military build-up, it has invested a huge amount of effort into propaganda as well.  ‘Enemies’ are needed to justify all the difficulties that occupation has brought, with Ukraine standardly, if preposterously, used as the main target.  Although this is the first time that law suits in Russian “and international” courts have been mentioned, there have long been blustering claims about Ukraine’s supposed ‘violation of human rights’ and threats to complain to the United Nations General Assembly.

According to the Geneva Convention, it is Russia, as occupying state, that bears full responsibility for all that happens on occupied territory, and for all such requirements, as water and food. ‘

This is not a situation where Ukraine need excuse its position to anybody.  If it reaches a point where Crimeans are deprived of drinking water, this will be because Russia is prioritising its military requirements over those of the population.  Most importantly, any capitulation on Ukraine’s side will help Russia cement its occupation and could result in western countries feeling justified in removing the sanctions now in place.  Russia has brought repression, political prisoners and grave human rights violations to occupied Crimea and this looks likely to end only when Russia is finally forced out of Crimea.