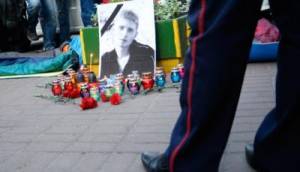 The Svidomo website has published CCTV footage which shows student Ihor Indylo being brought into the Shevchenkivsky Police Station in May last year just hours before he died.  He seems neither drunk, as the police have alleged, nor anything but a healthy young man, about to turn 20.

Svidomo journalist Oksana Piddubna writes that they are publishing the videos in view of the start of the second court case over Ihor’s death. The first court decided that the investigators had not covered everything and sent the case back for further investigation. However the Prosecutor’s office managed to get that decision overturned in August this year, and the court, against the wishes of Ihor’s family who had sought further investigation, is now examining Ihor Indylo’s death while not charging anyone with causing it.

Police officer Serhiy Prykhodko who detained the young student is charged with exceeding his official powers, violence and degrading Indylo (this carrying a sentence of from three to eight years). The other defendant is police officer Serhiy Kovalenko who is charged with professional negligence leading to an infringement of a detainee’s rights (a fine, corrective work of up to 2 years or imprisonment for up to 3 years). Nobody has been charged with applying torture leading to the young student’s death which would carry a sentence of from 7 to 10 years.

Oleksandr Zarutsky, the lawyer who is representing Ihor’s family has submitted several applications for further examination. Oleksandr, who is not taking any money for his work, believes that the evidence clashes with the video footage.

On the video Indylo does not look hopelessly drunk.

Much of the police account is based on Ihor’s alleged extreme drunkenness, from the reason given for detaining him at his student hostel to his death, supposedly from falling. According to the forensic analysis he had from 3.06 to 2.91 promils of alcohol in his blood, and should have been swaying as he walked, with serious impairment to coordination.

Ihor is pulled into the cell

An hour arriving at the police station, Ihor is already not about to move by himself.  At 21.49 Prykhodko drags him into the room for administrative detainees (see the left bottom corner).

This contradicts the testimony of Oleksandr Khomenko, apparently with Ihor, who asserted in court that one of the police officers accompanied Ihor to the cell and that Ihor himself lay down on the bench.

Ihor is lying on the floor

- in the footage the police are paying no attention to him. This contradicts the testimony of another detainee, A. Rymar, who told the court that Ihor himself got on the bench and slept peacefully until almost 5 a.m.

At 22.11 Ihor Indylo for the first time begins moving after having lain motionless for 20 minutes. If he had really been in such a drunken state, he would have slept soundly. Whereas if he had already received an injury causing pressure to the brain, such behaviour is possible.  After three hours of restless movements, Ihor lies down on the bench.

Ihor falls off the bench.

At 01.23 Ihor fell from the bench. It is this fall which supposedly caused the closed brain and skull injury and fractures.  None of the experts has been able to explain why, if the impact from his fall was so great, there was a skull fracture but no other major bruises.  Nor, if the impact was so great, is it clear why the two detainees in adjoining cells did not wake up. Officer Kovalenko saw that fall.

According to the analysis, Ihor died at around 03.00.  At around that time another officer Oleksy Zhyzherin takes one of the detainees out, walking around Ihor’s body. He turns Ihor’s body over with his foot.

At 04.50 the police officer takes an interest in Ihor’s condition and, according to his testimony in court, calls an ambulance.

At 05.14 ambulance doctors arrive at the cells and certify that Ihor Indylo is dead.