Court issues arrest warrant for Mykola MelnychenkoGongadze Lawyer: Pukach repeats learned phrases about uprisings and spiesOSCE media freedom representative urges full transparency in Gongadze murder trialNo apparent hurry to try Gongadze murder suspectCourt decisions in Pukach case also hidden from the publicMyroslava Gongadze: “The Public should understand what criminals governed the country”CPJ: Gongadze suspect admits to killing, implicates KuchmaGongadze Lawyer: Pukach acts as though he feels protectedGongadze murder: Material on Kravchenko returned to the Prosecutor GeneralMyroslava Gongadze: They’ve taken away my right to know the motives of Pukach’s crimeCPJ: Gongadze murder suspect’s trial should be open to publicGongadze Case: 150-page indictment behind closed doorsGongadze Lawyer: Where are the “State secrets” in the Pukach trial?Gongadze Lawyer: Pukach Case closed so that Journalists don’t hear to muchOne of the aggrieved parties in the Pukach trial kept out of the hearingCourt hearing in Pukach trial postponedPukach trial to be held behind closed doorsKuchma’s lawyers get criminal investigation reopened against MelnychenkoTrial of Gongadze murder suspect to continue behind closed doorsCharges against Kuchma: Is this about murder – or politics?
• Topics / The right to life
• Topics / Freedom of expression 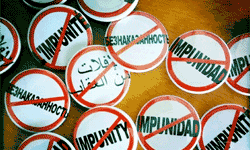 On International Day against Impunity, Ukrainian journalists will be reminding the authorities of crimes against journalists which remained unsolved and therefore unpunished.

The march will begin at 11.00 near the President’s Administration with a press conference announcing a petititon to the President as Guarantor of the Constitution and Prosecutor General.

The journalists will then march to the National Union of Journalists, while parliamentarians from the journalist community will provide the Prosecutor General’s Office with an outline of all unsolved cases. Tthere will be a roundtable from 12 to 14.00 concerning impunity and violations of journalists’ rights.

At 15.00 a group of journalists will hand a petititon against impunity to the Belarusian Embassy in support of Belarusian colleagues.

The organizers ask all journalists to show solidarity and raise the issue of impunity on 23 November with the authorities and the Ukrainian public, as their colleagues in other countries will be doing.