Demonstration in Kyiv in support of Ales Bialiatski broken up 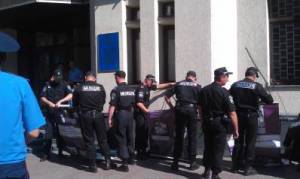 On Sunday members of a protest in support of imprisoned Belarusian human rights defender Ales Bialiatski were stopped by police who removed all their leaflets. One of the activists, Nazar Boyarsky was detained supposedly for infringing the rules for organizing public events. This was despite the fact that notification of the planned action had been submitted and all other formal requirements followed. The protest was held in the centre of Kyiv, but not within the boundaries of the Euro 2012 fan zone.

Nazar was later released from the Pechersky District Police Station, but is facing an administrative charge under Article 185-1 of the Code of Administrative Offences (infringing the rules for organizing and holding various types of meetings and demonstrations).

A court hearing is scheduled for Monday at 14.00. to consider whether he was detained lawfully. According to the Code of Administrative Offences, infringements under Article 185.1 can carry a fine from 10 to 20 times the minimum wage before tax or a warning.

The protest in support of Ales Bialiatski was supported by Amnesty International in Ukraine; the Association of Ukrainian Human Rights Monitors of Law Enforcement; the Centre for Civil Liberties; the Foundation of Regional Initiatives; the Ukrainian Helsinki Human Rights Union; the Debate Academy and the Postup Human Rights Centre.