TVi disappears in four more citiesParallel Media WorldsPublic help TVi to pay off tax authoritiesAppeal Court finds in TVi’s favour in earlier dispute with Broadcasting CouncilBroadcasting Council promises to check why TVi is being cut off AFTER the electionsPoroshenko apparently cancels sanctions against TViTVi loses appeal over tax caseTVi prohibited from contracting foreign agreements without official permissionTVi disappears in yet another cityElectoral FoulIndependent TV station under increasing threatUkrainians defy court bans to defend TViDefend Freedom of Speech!Stop the Destruction of Freedom of Speech in Ukraine!TVi journalists turn to the Ukrainian public and international bodiesTVi demands that the Prosecutor take measures against TriolanTVi accuses Broadcasting Council over removal from cable networksAccess denied to independent TVi in DonetskKnyazhytsky invites regional channels to broadcast beleaguered TVi material for freeBroadcasting Council keeps out of “conflict” between TVi and Triolan
• Topics / Freedom of expression 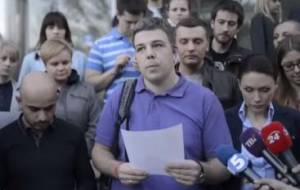 Journalists of TVi, virtually the only relatively independent TV channel left in Ukraine, are on strike after a day of scandal and conflicting reports. The following is the statement issued on Tuesday evening after the journalists were prevented from broadcasting it on their own channel.

“This morning, 23 April, members of staff of the TVi channel found themselves in a situation which in its appearance and formal features bears the hallmarks of a seizure of the channel. The General Director of the TV company Teleradiosvit, Natalya Katerynchyk, together with the owner over many years of the channel Kostyantyn Kahalovsky, was not allowed into her workplace, . On the official website press release was issued which stated that the structure of the company’s ownership had been changed; that Artem Shevchenko had been appointed the new head and that Natalya Katerynchyk had accordingly been dismissed. At a meeting of the staff American businessman Alexander Altman was presented as new investor; and the previous owner was declared to not exist.

The first step of the “new” management as represented by Artem Shevchenko was to not allow the formally legitimate General Director Natalya Katerynchyk on air. The new management shortly removed the programme “Syohodni pro holovne” [Today’s main stories] from air completely, replacing it with a repeat. TVi editors and journalists were not able to put forward their position regarding the situation on the channel.

that a stop be put to the seizure of the TV channel;

that the journalist be given the opportunity to present their statement on the situation during a live broadcast on the channel;

that the law enforcement bodies establish whether the change in channel  management and investors is legal;

Until such time journalists will not present the news. In addition today Pavlo Sheremet’s programme “Proty nochi” will not be broadcast; nor the programme “Alberteinstein” and “Tender-News with Natalya Serletska”.  Yury Makarov also decided to not broadcast his programme “Civilization”, however since it had already been put together, it was broadcast against the author’s wishes.”