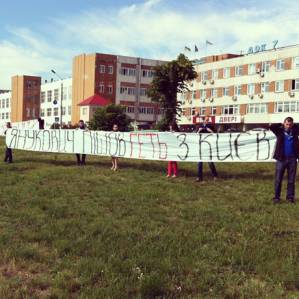 Four members of the Democratic Alliance party were detained on Monday for a peaceful protest on the route taken by President Yanukovych’s cortege.

Ukrainska Pravda reports that at around 9 a.m. approximately 50 Berkut riot police blocked the civic activists who were holding a totally peaceful protest along Bohatyrska St where Yanukovych’s cortege would be passing.  The Head of the Department for Public Order, Serhiy Boiko was present and ordered that the activists be detained if they refused to unfurl their banners (reading: “Yanukovych, get out of Kyiv” and “Kyiv needs elections”.)  He claimed that the banners contained offensive statements without specifying what exactly was offensive.

At around 9.15 the leader of the party, Vasyl Hatsko was detained.

Later the police stated that the activists had been detained over planners which supposedly “insult and denigrate the President’s honour and dignity”.

They claimed also that they had obstructed transport (though did not explain how since they were not on the road), and that the activists had refused to obey the legitimate demands of police officers.

Radio Svoboda later reported that the charges against the four activists are of obstructing the traffic and using bad language, and that 15 days imprisonment could be imposed. The Radio Svoboda correspondent confirms that the activists never set foot on the road.  The four detained are those who were holding the banner reading “Yanukovych, get out of Kyiv”.  Presumably this was the “foul language”…

On Monday evening it was learned that the court had found all four activists guilty of willfully disobeying police officers but at least confined itself to issuing fines.  Democratic Alliance intends to appeal the ruling.