Too Many Questions in Zaporizhya Church Bomb Case 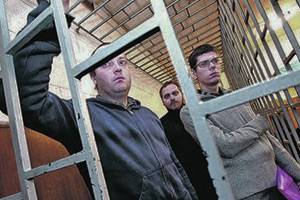 Former political prisoners, human rights activists and many lawyers have called on EU Delegation to Ukraine Ambassador Jan Tombiński to attend the appeal court hearing in the trial of three young men accused of the 2010 Zaporizhya church bomb blast. EU presence on Oct. 1, they say in their appeal, will give a powerful and much needed signal regarding a trial with serious implications for Ukraine’s justice system.

The signal would be similar to that given by the EU’s firm stance regarding the imprisonment of Yulia Tymoshenko. There may be no high-profile opposition figures in the Zaporizhya case, no political context, but there is a shared fatal element highlighting systemic problems in Ukraine.

The “case of the sacristans” gained prominence because of the role played by President Yanukovych. That role is widely deemed to be the determining factor in this case, with the guilt of the three young defendants seen as questionable, but largely immaterial. Since the two former sacristans - Anton Kharytonov and Yevhen Fedorchenko – and Anton’s brother, Serhiy Dyomin are facing 14 and 15 year sentences, the implications for rule of law in Ukraine are grave.

A day after the bomb exploded, killing an elderly nun, President Yanukovych held a televised meeting with the heads of all law enforcement bodies at which he ordered arrests within the week. Less than a week later Interior Minister Mohylyov informed the President on television that the case was solved and the culprits in custody. He also mentioned likely rewards for the officers involved and many have since then also been promoted.

The enforcement bodies certainly acted swiftly. The morning after Yanukovych’s television appearance, former sacristan Anton Kharytonov was taken, together with his mother, to the police station. He only formally appeared at the station, however, some 13 hours later. The protocol of detention was drawn up immediately prior to his first “confession” at midnight and subsequent night interrogation. His brother Serhiy Dyomin, detained that evening, was held even longer in police limbo before writing his first confession. Kharytonov gave four quite different “confessions” over the following days. Dyomin gave only two, but the difference was telling. He first confessed to constructing the bomb, and there is a video of him explaining very tentatively how he did so. This explanation, together with his ability to make the device, was immediately rubbished by explosives experts, and Dyomin swiftly produced another in which he confessed to having bought the device from an unidentified individual.. A second sacristan – Yevhen Fedorchenko – was arrested a few days later and made only one confession.

There are thus 7 confessions from the three defendants which all have retracted, asserting that they were obtained through torture, threats and psychological pressure. The men were not allowed to contact their families and three of the lawyers called in by the investigators who sat in on the formal interrogations later faced professional disciplinary measures for their behaviour in the case.

Some of the other young people taken into custody at the same time also complained of torture at the hands of the investigators. In Kharytonov’s case, the police were never able to explain why the pockets of the young man’s trousers can be seen during the videoed interrogation to have been cut out. Kharytonov asserts that the officers cut them out during the first 13 hours, threatening to cut off his genitals if he didn’t “confess”. Both brothers report threats that their mother would also be arrested, and their grandmother abandoned in an old people’s home.

Two forensic psychologists from the Luhansk and Donetsk Institutes examined the formal interrogations and found that the young men had been placed under considerable pressure, had been constantly asked leading questions and had in fact never given a free account of the crime they purportedly committed.

One of the most worrying aspects of this case can be seen in the judge’s response to those assessments. Judge Volodymyr Minasov simply ordered a third assessment from the Kyiv Institute which totally contradicted the first two, found no pressure and only “inclination to criminality”. Minasov then rejected the defence’s application to have all three psychologists summoned as witnesses to get to the bottom of such divergent assessments. The list of other discrepancies and infringements which he ignored is significant. It is his guilty verdict and heavy sentences that are now at appeal stage.

In fact, however, there is one even greater cause for concern with respect to the “case of the sacristans”. All of the above, the lack of any actual evidence linking the defendants with the crime and other equally disturbing aspects have been reported on many occasions. Yet there has never been any proper investigation into the allegations made of torture and of infringements during the trial, Formal complaints simply get sent on to other departments.

Requests have also been made to the Human Rights Ombudsperson Valeria Lutkovska, to Amnesty International and other NGOs. A letter with information about the case has also been sent to the Committee for the Prevention of Torture.

The lack of active response is baffling since the complaints are similar to those which have led in many cases, such as Zamferesko v. Ukraine, Nechiporuk and Yonkalo v. Ukraine to European Court of Human Rights judgments against Ukraine. The court in Strasbourg was unequivocal: multiple confessions extracted through torture render all criminal proceedings against the person unfair.

The complaints, as well as the undisputed procedural irregularities in those first days, are also the same as those which have led to damning reports about police impunity and methods of obtaining confessions in Ukraine.

Ukrainians’ trust in the law enforcement bodies and in the courts has reached an all-time low, as has the number of acquittals (0.17% of all criminal trials in 2012).

This is not just material for the next report on Ukraine’s non-compliance with international obligations. A gravely flawed trial is taking place now and the stakes for three young men, their families, and for Ukrainian justice could not be higher.

Standing by and simply watching because the young men are not politicians or in any way prominent figures, is surely another form of selective justice, and must not be an option.