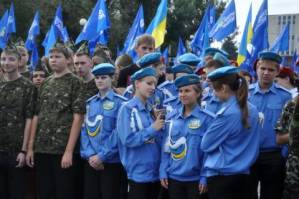 A Luhansk court has rejected a civil suit brought by a parent against the local authorities for making his school student son, and other kids, take part in an event which he considers a pretext for promoting the ruling Party of the Regions.  The decision to reject the suit was passed by judge Andriy Kayuda of the Luhansk District Administrative Court on Jan 9.  The grounds for this ruling will presumably be made public later.

As reported, the law suit was lodged by Kostyantin Reutski, head of the Postup Human Rights Centre.  His son had classes cancelled and was instead sent to take part in an event marking the liberation of the Luhansk oblast from the Nazis on September 3 (1943).  Oleksandra Dvoretska, a lawyer from the Crimean Network of Legal Aid Centres who represented the claimant in court pointed out that the kids were not told anything about the Nazi occupiers and were given Party of the Regions flags and other insignia.

It is difficult to imagine what kind of justification the judge can find since the event was clearly organized under the auspices of the Party of the Regions, whereas Article 8 of the Education Act explicitly prohibits the involvement of children in political or religious events.

The human rights activists have already stated that they will take their case to the European Court of Human Rights if necessary.

It should be noted that this is by no means the only occasion over the last 4 years where children, or public sector workers, have been drawn into activities which seem chiefly aimed at providing good publicity for the Party of the Regions.