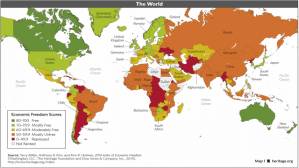 Ukraine is the only European country which remains „repressed” according to the 2014 Index of Economic Freedom produced by the Heritage Foundation in cooperation with the Wall Street Journal.  The report notes that Ukraine’s record has only improved by 9 points over the last 20 years and is ranked 155th out of 178 countries in the study, and the worst out of 43 countries in Europe.

Ukraine’s economic freedom score is 49.3, making its economy the 155th freest in the 2014 Index. Its score is 3.0 points higher than last year, with notable increases in five of the 10 economic freedoms including business freedom, control of public spending, and monetary freedom. Ukraine is ranked last out of 43 countries in the Europe region, and its overall score is lower than the world average.

Over the 20-year history of the Index, Ukraine’s economic freedom score has advanced by over 9 points. Score increases in half of the 10 economic freedoms include particular gains in monetary stability and openness to global trade and more moderate progress in fiscal freedom and the elimination of corruption.