Crimean Tatars vote to create a national autonomy in the Crimea 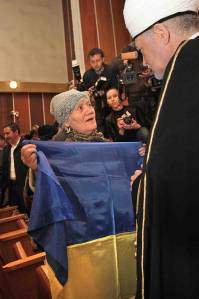 The Kurultai or assembly of the Crimean Tatar People, meeting in special session, has voted to begin “the political and legal procedure for the creation of a Crimean Tatar national territorial autonomy in their historical homeland – the Crimea.

Refat Chubarov, head of the Mejlis of the Crimean Tatar People stresses that the Kurultai’s decision is based on the UN Declaration on Indigenous Peoples from 13 September 2007.  This affirms the right of an indigenous people to self-determination; to autonomy and self-government; to take part as they choose in the political, economic, cultural and social life of the state in which they are living.

Military action may not be carried out on the territory of an indigenous people without their consent or request (Article 30 of the Declaration).

Chubarov points out that “the change in status of the Crimea at the present time is being carried out without the consent and clear will of the Crimean Tatar People, the indigenous people of the Crimea.”

One of the suggestions put to the Kurultai was to reject any relations with the occupying authorities and government headed by Sergei Aksenov which have not been recognized by most countries. The Kurultai seems to have decided to not fully close the session but rather await the return from Mustafa Jemiliev and another delegate who are currently in New York, presenting the position of the Crimean Tatars at the United Nations.

The Kurultai was addressed by Aishe Seitmuratova, veteran of the Crimean Tatar national movement. She expressed distrust in the Russian authorities and pointed out that Russia had deceived the Crimean Tatars three times. “It is not we who rejected Russia. Russia rejected us three times.”  In 1774 the Crimean Khanate was recognized as an independent state, then 9 years later, in 1783 Russia seized the Crimea through a war and revoked their statehood. Then during the Crimean War from 1853 to 1856 Russia forced a huge number of Crimean Tatars to flee to Turkey. “We remember also that in 1921 Russia formally declared the creation of the Crimean Autonomous Republic of the USSR, yet that didn’t save the people from numerous repressions, executions, various forms of persecution. And in 1944 Russia, to whom we’re being called now, dissolved our last form of statehood in the Crimea – the Crimean autonomy and at 4 a.m. deported everybody, to the last person, by force from their homeland. We must therefore say bluntly that we know what Russia is”.  Aishe Seitmuratova went on to say that in the 1990s Ukraine had accepted them as one of the peoples of Ukraine.

The Kurultai has been meeting in Bakhysarai, rather than Simferopol as is usually the case because the Crimean Tatars feared provocation from pro-Russian forces.

As reported, the Mejlis called on all Crimean Tatars and other residents of the Crimea to boycott the so-called referendum held on March 16.  This, as expected, was claimed to have given overwhelming support for the Crimea “joining” Russia.

In fact, Mustafa Jemiliev, former head of the Mejlis and veteran defender of Crimean Tatar rights, has presented evidence suggesting that only 34% of Crimean residents actually took part in the vote.  The puppet government installed at gunpoint on Feb 27 after Russian soldiers seized government buildings in Simferopol claimed a much higher figure and that a large number of Crimean Tatars had taken part.

The “referendum” gave only two options, neither of which offered retention of the status quo.  There was no minimum turn out and a huge number of procedural irregularities.  It was, for example, possible to turn up and vote on the day even if ones name was not on the list and people reported being able to vote without showing their passports.  The possibility of casting multiple votes was thus enormous.

The referendum was condemned beforehand by Ukraine’s main election watchdogs and western countries.  The only “observers”, invited by Russia proved to be people from far right or neo-Stalinist parties (see, for example, The Crimean Referendum’s Neo-Nazi Observers)

As reported, Ukraine’s parliament passed a law on March 20 declaring the Crimean Tatars to be an indigenous people of Ukraine.

Russia’s military aggression and annexation of the Crimea give little scope for optimism regarding respect for the wishes of the Crimean Tatar People. On the other hand, Saturday’s decision must be an embarrassment to the Kremlin and a clear statement to the international community.