The Police must not be a threat to the public 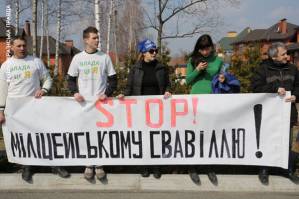 The Interior Ministry has published a list of 33 candidates for the post of head of police in the Kyiv, Lviv, Volyn and Ternopil oblasts, and is inviting the public to take part in discussion of these candidates.

This is the first step in measures initiated by the new Interior Minister Arsen Avakov, aimed at ensuring that the most fitting candidates are selected for managerial posts throughout the country.

Yevhen Zakharov, head of the Kharkiv Human Rights Group, explains that Avakov approached him after some initial appointments were met with strong protest in western regions.  A small commission has been organized with Zakharov, well-known civic activist and journalist Yehor Sobolyev and journalist Yury Butusov.  Their task has been to carry out an initiative vetting process of people wishing to be considered for the new managerial posts.  Then five days are given for public discussion and further collection of information about the people.  The role of journalists here is important since the aim is to find out in time if these prospective candidates have been implicated in any corrupt setups, etc. in the past.  Only after this stage has ended will appointments be made.

The list is published on the ministry’s site, and at http://ord-ua.com  comments are left.  Asked how one deals with the fact that comments are given anonymously, Zakharov asked how else one can hold a public discussion. He stresses that it is not only those anonymous signals that will be considered, but information received by other means, including through journalist investigations. “It’s possible that the system has nothing against the person and he has never been prosecuted, but that doesn’t mean that he did not carry out unlawful actions. Impunity is one of the main reasons for the lawlessness of Ukraine’s police.”  He adds that with regard to some of the candidates, he is looking at the material and that it’s clear to him, and to others as well, that the people should not have applied.

Zakharov notes that there is considerable scepticism both among police officers and the public about this initiative, with many believing that the posts will still go to those earmarked for the jobs, and that the procedure is for appearances.  It would be impossible to totally dismiss such scepticism.  He is convinced that Avakov is not taking money for posts, but believes it possible that MPs who are presently lobbying this or that candidate could have taken bribes.

“Avakov wants to break this system which is why he began this procedure. For that reason I agreed to this thankless work which takes a huge amount of time, energy and nerves, to help the ministry, the ministry and all of us.  It would be good if people were appointed who aren’t implicated in corrupt setups, and not involved in flagrant human rights abuses. Whether it works is hard to say since there are a large number of interests which are tangled up and clashing.

Zakharov says that he is not certain that their views will be heeded.  There are only three of them on a commission which also includes the minister, his deputies and other people from the ministry. If it transpires that a person who absolutely should not have been appointed gets the job, then he, Sobolyev and Butusov will be forced to give up, this being the most they can do. He hopes this will not happen.

An expert council on human rights attached to the ministry is being set up as well. This will be engaged in drawing up initiatives on reforming the Interior Ministry in order to humanize its work.

Zakharov was co-chair of the Ministry’s Public Council on Human Rights from 2005 to 2009.  He says that Avakov is proposing to reinstate all the civic control projects which were stopped shortly after the new regime came to power in 2010.  This includes public councils; mobile groups carrying out monitoring of police detention facilities; regional human rights advisers to the minister, etc.

Since Avakov is likely to be in this post only till November at the latest, Zakharov believes it vital to get as much done now as possible, while they have a minister who appears committed to making real changes.