Comparison of xenophobia in Ukraine and in Russia 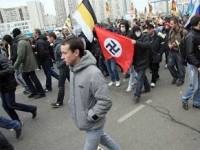 At a Russian march in Moscow

In view of widespread attempts over recent times to manipulate the issues of anti-Semitism and xenophobia, the National Minority Rights Monitoring Group which monitors xenophobia in Ukraine has carried out a comparative study of the number of crimes based on ethnic, racial or religious hatred in Ukraine and in Russia.

The Monitoring Group notes that over recent months Russia’s leaders and civic organizations, some international, which are loyal to the Kremlin, have been engaged in a propaganda campaign aimed at justifying the armed invasion and annexation of Ukrainian territory.  This has included attempts to gain mileage out of talk about the level of xenophobia and anti-Semitism in Ukraine.

In Ukraine 21 people suffered as the result of racially or ethnically motivated attacks;

In Russia, according to the Sova Information and Analysis Centre, 199 people were attacked in hate crimes, with 21 killed.

Roughly similar figures are provided by the Moscow Human Rights Bureau which reports 205 victims of racist attacks, with 25 people killed.

In Ukraine there were 20 acts of xenophobic vandalism.

In Russia, the Sova Centre reports 70 such cases

In the first four months of 2014 monitoring has identified five victims of xenophobic attacks.  The Monitoring Group points out, however, that because of the occupation by Russian forces of the Crimea and terrorist activities of pro-Russian militants working under the leadership of Russian military specialists, it has become much harder to verify reports of xenophobic crimes in a number of regions.

There may, for example, have been hate-related murders and beatings on occupied territory in the Crimea in March and April, with experts inclined to view one death as a hate killing.  There have also been anti-Roma pogroms in Slovyansk (Donetsk oblast) which has been seized by militants.  The Monitoring Group is currently trying to verify these incidents.

It should be pointed out that prior to Russia’s intervention, the last ethnically or racially motivated killing in Ukraine was in 2010.

In Russia, according to preliminary data from the Sova Centre, 31 people suffered from racist violence, with 8 killed during the same four month period.

During these four months there were 11 cases of xenophobic vandalism in Ukraine, with four of these in the Crimea under Russian occupation.  This is against 17 cases in Russia.

The National Minority Rights Monitoring Group was created on the initiative of Ukraine’s Congress of National Communities in April 2014. It is headed by Viacheslav Likhachev who has been monitoring anti-Semitism and xenophobia in Ukraine for over 10 years.

The original report can be found here: http://eajc.org/page18/news44658.html