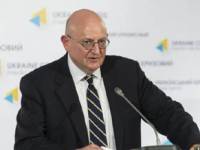 At a press conference on May 16 in Kyiv, Ira Forman, US Special Envoy on Anti-Semitism explained the results of his visit to Ukraine aimed at assessing the impact that the current crisis is having on Jewish communities in Ukraine.

He explained that the situation in Ukraine was especially important given the Russian propaganda and claims that the interim government is populated by fascists and anti-Semites, and that Jews are leaving in mass numbers.  He mentions also reports of “pro-Russian actors purchasing and propagating propaganda all around the globe targeting the world Jewish community”.

Ira Forman’s comments can be heard in full here

He found overwhelming consensus among members of the Jewish community with regard to the following:

There are no fears of anti-Semitism connected with the interim government.

There are acts of anti-Semitism, but these fall into two categories.  The first are associated with ‘pro-Russian actors in the East and South’.  The second category involves incidents where the perpetrators are unknown, but where there is widespread believe among members of the Jewish community that they are probably perpetrated by pro-Russian actors and not associated with either the interim government or with nationalist movements.

Forman stressed that “it is wrong and dangerous to use anti-Semitism as a political tool in the run up to the presidential election. It is extremely dangerous especially given the history of this part of the world.”  He said that the claims made by pro-Russian actors and Russian authorities about the Ukrainian interim government are simply false and misinformation.  His conversations with the authorities have convinced him of their determination to find the culprits of incidents of anti-Semitism,