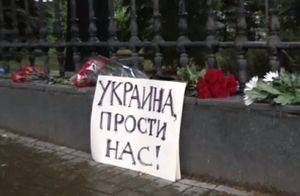 Despite the relentless propaganda and hate speech of most Russian media, by no means all Russians have been taken in.  On June 15, a day of mourning in Ukraine,  Ukrinform reports that around 20 Russians came to the Ukrainian Embassy in Moscow to lay flowers in memory of the 49 men whose plane was shot down by terrorists from the Kremlin-backed self-proclaimed Luhansk People’s Republic.  They were dressed in embroidered shirts and one held a placard in Ukrainian saying “Forgive us!”.

It later reported that in the afternoon some Russian citizens came with a placard asking for forgiveness “for Putin.  Accept our condolences and forgive us for our duped people”.  It was signed “The Sergeyev family and real citizens of Russia”.

As a depressing indication of the aggression being stirred up in Russia, a young man walking past tried to wrench the placard away and pushed seventy-year-old Alexander Sergeyev who fell to the ground, receiving a head injury.

The police did detain the assailant.  They also, however, detained five people after the laying of flowers in memory of those killed.

The video here demonstrates the measures used to ‘protect’ the embassy.

On another video, a young woman asks “dear Ukrainians to please accept our sympathy.  It’s terrible that there has been such a tragedy, that young men are dying. Forgive those of us who are here now and cannot change anything. I hope that you will succeed in building your country and stopping the war. I hope that you believe that we’re not all like those shown on television”.

Three months ago, on March 15, around 50 thousand Russians took part in a march and rally in Moscow against Russia’s military aggression. The protesters called for Russia to withdraw its troops from the Crimea and to stop interfering in Ukraine’s affairs.

The rally was addressed by prominent writers, musicians, academics.  Earlier an appeal had been signed by over 90 prominent Russian artists, musicians and academics, expressing grave concern over Russia’s rapid descent into a new cold war with the west and the “unrestrained torrents of lies and disinformation in all Russian state media”.  The authors spoke of “a deafening propaganda campaign against all who try to question the actions of the authorities and point out their disastrous consequences for the country and for the people”.

It is very important to remember these voices of sorrow and shame.  Those who openly express their opposition to the current Kremlin line on Ukraine face aggression themselves, whether from louts at protests, or the virulent hate campaigns in the media against the musicians Andrei Makarevich, Yury Shevchuk and others.  The geopolitical ambitions and KGB ways of Russia’s current president have proved a tragedy for Ukraine, but have long been so for Russia itself.