Bogus claims of ’Muslim radicalism’ as weapon against the Crimean Tatars 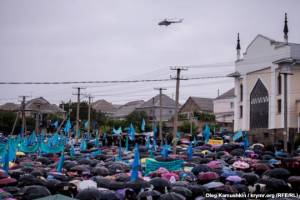 Military helicopter flies over one of the remembrance gatherings marking the seventieth anniversary of the Deportation of the Crimean Tatar. Two days before the anniversary, the occupation government banned all events, and soldiers and riot police were used to stop people gathering in the centre of Simferopol

Recent developments in Russia and the Crimea suggest that Kremlin strategists are hoping to gain dividends out of mounting fears in the West of the hard-line Islamic State and ‘Muslim radicals’. The ploy has worked in the past with western leaders willing to turn a blind eye to the methods used, for example, against rebels in Chechnya in the name of a purportedly shared fight against terrorism.  The manipulation as regards the Crimean Tatars, however, is overt, the ‘extremism’ invented as a weapon of repression and the dangers immense.

It is no accident that the announced application by the Russian Justice Ministry to close the renowned human rights organization Memorial coincided with a defamatory TV programme alleging that the organization is hand in glove with terrorists and radicals now fighting for the Islamic State.

Equally scurrilous reports in the Russian media have now given voice, if no backing in hard facts, to recent attempts to present Crimean Tatars as ‘radical Muslims’ who could unleash a wave of violence in the Crimea.

Russia and its puppet government in the Crimea wasted no time in unleashing repressive measures against the Crimean Tatars, ethnic Ukrainians and all opponents of Russian occupation.  There have been armed searches of Crimean Tatar homes, mosques and religious schools; warnings issued over supposed ‘extremism’ to the Crimean Tatar newspaper Avdet, the only Crimean Tatar TV channel ATR, as well as to the Mejlis, or representative-executive body of the Crimean Tatars and its head, Refat Chubarov.  Together with veteran Crimean Tatar leader Mustafa Dzhemiliev, Chubarov is now banned from his homeland.

From exile they have watched the latest wave of terror in which four young Crimean Tatar men have been abducted or disappeared.  One – Edem Asanov – was found dead last Monday in circumstances which only the authorities assert are unsuspicious.

from the Mejlis, the events in the Crimea are developing according to a ‘Chechen scenario’.  He recalls that at the beginning of armed conflicts in Chechnya and other parts of the Caucuses there were abductions and disappearances, media claims of radicalization and of groups of fighters forming, and, as a result more active measures by the Russian enforcement bodies against particular groups.

On Oct 8 a particularly sinister article entitled “” appeared in the Russian newspaper Nezavisimaya. It begins with the words: “Fighters schooled by war in Syria and Novorossiya are amassing on the borders of the peninsula”.

The author, Vladimir Mukhin then claims that the Ukrainian authorities have decided “to make use of the fragile ceasefire in the South-East of the country so as to organize, together with Islamic radicals, disturbances in the Crimea”.  The author supposedly bases this assertion on reports from “several independent sources”.

“The Russian authorities, judging by everything, are taking such reports seriously. The media speak of a recent increase in searches and arrests of members of radical Islamic organizations which are continuing illicit activities in the Crimea. However Moscow is for the moment unable to influence the main threat - Crimean Tatar fighters in Ukraine”.

Not one such arrest has been reported,

The nature of the author’s ‘sources’ soon becomes clear.  One is Ruslan Saitvaliev, head of the recently created and highly contentious Tavrida Muftiat.  Within days of its creation,  Saitvaliev gave an interview to a Russian newspaper in which  that most Crimean mosques are led by supporters of ‘non-traditional Islam’, specifically ‘vakkhabites’ or members of  , which is banned in Russia.

The Spiritual Directorate of Muslims of the Crimea was outraged by such provocative nonsense and demanded an explanation from the High Mufti of Russia who had played a role in the muftiat’s formation.

Whether an answer was received is not known, but the explanation for such wildly wrong assertions is becoming increasingly clear.  According to the author, Saitvaliev has once again obliged by claiming that on social networks these ‘vakkhabites’ and members of Hizb ul-Takhrir are calling on people to begin a war in the Crimea.

The author cites Igor Druz from the Kremlin-backed militants of the self-proclaimed Donetsk people’s republic as claiming that groups of fighters for action on the peninsula have been formed from Crimea Tatars previously fighting in Syria.  The latter are supposedly undergoing training at an SBU [Ukrainian Security Service] base.

“He believes that in the course of subversive actions important parts of infrastructure, including railway junctions and stations, could be destroyed. However the main goal of the fighters, Igor Druz says, is to ‘raise a revolt’. The secretary of Russia’s Security Council Nikolai Patrushev can also not exclude such a scenario as he told colleagues from the CIS at the end of September.”

According to other unnamed sources, there are two recruitment points for Muslims in the south of Ukraine, while equally unnamed specialists say that the “greatest danger for Russia is concentrated in Dnipropetrovsk”.  This, it is asserted, will come from a regrouping of the Krym Crimean Tatar volunteer battalion which the author calls a “special battalion which included Islamic fighters”. Not surprisingly, given the Russian media’s chief bogeymen, governor of Dnipropetrovsk Ihor Kolomoisky is mentioned as not just funding the battalion, but now supplementing its numbers with the constantly vilified nationalist Right Sector.  The battalion’s new task, the author claims, is to carry out subversive actions in the Crimea.

Lest the reader be left sleepless with anxiety, the author has words of reassurance.  Russia’s Security Service and military are onto this and will be ready, together with what were the internal forces in Ukraine and have now been regrouped and supplemented with local residents.  These “have a good command of the situation and skills at fighting insurrectionists from the time of the Kyiv Maidan”. The so-called ‘self-defence’ paramilitary units who are clearly referred to have been responsible for numerous violent attacks and abductions over the last 8 months.  There is video footage showing that they were behind the abduction of Crimean Tatar Reshat Ametov whose mutilated body was found on March 16.

In September Sergei Aksyonov, the ‘prime minister’ installed at gunpoint after Russian soldiers seized government buildings on Feb 27 effectively threatened to deport or prosecute those guilty of what he called causing inter-ethnic conflict, this including refusal to recognize Russian occupation.  That message has been reiterated in more sinister mode by the abduction and disappearance of four young men in the space of just over a week and by such articles.

The aim is also clear: intimidate as many Crimean Tatars as you can into submission, and force the others to flee to mainland Ukraine.  Both Mustafa Dzhemiliev and the Mejlis have  Crimean Tatars to remain in their homeland.  They have also called repeatedly for western countries to take heed of the situation the Crimean Tatars are in.  Those same countries  were slow to take any serious measures against Russia and are now increasingly making an easing of sanction contingent only on Russia’s backing off from eastern Ukraine.  In light of the treatment which the Crimean Tatars – and others in the Crimea who open oppose Russian occupation – are facing, any such willingness to effectively accept Russia’s annexation of the Crimea would reveal not only geopolitical weakness, but moral bankruptcy.