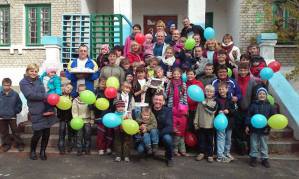 As if being driven from their homes and facing winter in makeshift accommodation were not bad enough, a local official Leonid Bessarabov from the Donetsk Railway Union is trying to evict almost 100 women, children, pensioners and invalids from their shelter.  He has met with determined resistance from Pastor Sergei Kosyak and others helping the displaced people who ask the media to publicize this monstrous attack on people in need of refuge and support.

Since August the children’s camp Beryozka near Krasny Lyman has served as a refuge for people displaced by the fighting in eastern Ukraine.  The camp itself had earlier been the scene of fighting and the living quarters needed a large number of windows replaced.

Sergei Kosyak explains that they cleaned up the camp, replaced all the windows, etc.  At the beginning the camp housed just 30 displaced people, later 100.  initially they put up 30 people, then later 100

Winter and the first freezing temperatures arrived and a summer camp needed to become a winter shelter.  They spent at least 200 thousand UAH [over 10 thousand EUR] insulating whatever they could, drilling a hole to secure their own water supply, setting up water heaters, etc.

That was when camp ‘manager’  Bessarabov turned up and announced that the 40 children, 35 women, 17 pensioners and invalids had three days to get out.

They responded by barricading all entrances to the camp with logs and branches, calling the press and establishing strict control over who was admitted into the camp.  This worked for a while, but Bessarabov, who Sergei Kosyak says has probably been milking state-funded institutions like the Beryozka camp for the last 30 years, has been looking for loopholes in the law in order to evict them. He refuses to speak with the Pastor and says one thing to journalists, and does something else.

“This person is shaming Ukraine and deserves lustration.  I would ask for media support and for public awareness of the problem”, Kosyak writes.  He stresses that the people at Beryozka are those whose homes were destroyed, or who could not survive, and are all actively engaged in different types of handicraft, woodwork and others.

With Ukraine under attack and almost half a million people forced to flee their homes, corrupt and callous individuals like Leonid Bessarabov are indeed a disgrace.  The people at Beryozka urgently need support in their resistance.