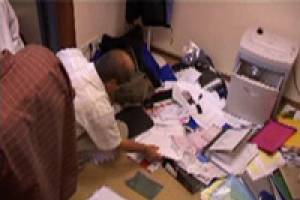 8 months into Russia’s occupation of the Crimea, the worst Soviet traditions are already entrenched. Hromadske Radio reports that on Dec 18 a Crimean Tatar home and the mosque in the village of Turgenevka [Bakhchysarai region] were subjected to an armed search after an employee of the home owner Mustafa Yagyaev denounced’ him following disagreement about Russia’s annexation of the Crimea.

Shemsiye Yagyaeva, Mustafa’s wife, was alone in the house at around 11 a.m. when two busloads of armed men and a further four cars turned up.  She was understandably terrified and clearly angered at such harassment of Crimean Tatars and Muslims.

Her husband believes that the search was because of an argument back in March with an employee with different views expressed over the events around annexation. The woman later ‘reported’ him to the police.  He says that he was stunned when he read that he’d claimed they would kill all Russians, that they would drown in their own blood and that they were only sorry that Muslim brothers would die.  He said nothing of the kind.

Yagyaev was summoned by the investigator on the day of the search and went with the police to his house.  They claimed to be searching for weapons, drugs and prohibited literature, but this is nothing new with all armed searches over recent months having supposedly been looking for all three things.  The enforcement officers removed several religious books; the hard  disk from a laptop; telephones; photographs and some documents.

The documents, Yagyaev explains, concerned preparations for a meeting in Simferopol in 1999 when he was head of the Mejlis.  The police also saw the need to remove photos of veteran Crimean Tatar leader Mustafa Dzhemiliev.  The 71-year-old Ukrainian MP and former Soviet political prisoner has gained world renown, but was banned from his homeland shortly after Russia’s invasion and annexation.

The neighbours who came to support the family were not allowed into the house and those videoing what was going on had their mobile telephones taken away with the footage destroyed.  Even the Yagyaev children were not admitted when they returned from school or work.

The police also searched the mosque – two months after a visitation which resulted in Mustafa Yagyaev who heads the religious society Teberti being fined for 7 religious books from Russia’s extraordinarily long list of ‘prohibited books’.   This time they found nothing.

While the woman’s claims are serious, they were clearly made months ago against a person whose standing in the Crimean Tatar community should demand more evidence before such armed searches are carried out.

The search of Yagyaev’s home and a mosque are unfortunately not new, nor are reports of denunciations being used as pretext for harassment or criminal investigations since Russia annexed the Crimea.