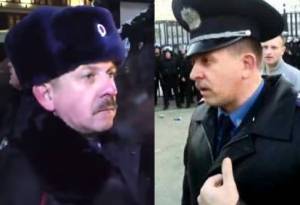 Petro Fedchuk, ex-deputy head of the Kyiv Police on the run from prosecution for the violent dispersal of peaceful Maidan protesters, including on Nov 30, 2013, may now be providing the same services to the Russian police.  While others are also continuing to evade justice, some former Berkut officers are fighting side by side with Maidan activists defending Ukraine.

Journalists first pointed out the Fedchuk lookalike at the violent treatment of Muscovites protesting on Dec 30 against the sentences passed on leading opposition politician Alexei Navalny and his brother Oleg.  8.38 minutes into the video below, Fedchuk’s face can be seen among the police officers suppressing the peaceful protest.  He has the stripes for the rank of colonel, and the word ‘police’ can be seen when he turns around.

Whether he was in charge of the dispersal of protesters on Dec 30 is unclear, but Fedchuk is suspected, together with his boss Valery Koryak of having unlawfully obstructed demonstrations and used physical violence during the EuroMaidan protests.  Koryak and Fedchuk disappeared on March 5 2014 and were placed on the wanted list by the SBU [Security Service] in April.

According to Ukrainian human rights activist Taras Hatalyak, Fedchuk answered for public order and played an extremely active part in the attempts to stop the protests in Kyiv through the use of force.  It was his head that would roll if he didn’t. 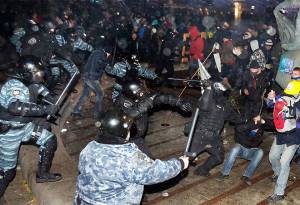 Hatalyak says that Fedchuk was in charge of the bloody dispersal of young protesters, many of whom had been fast asleep, at 4 a.m. on Nov 30.  His organization of lawyers for the victims of police violence believe that criminal actions were initiated by Fedchuk on a number of other occasions, and that these possibly included the attack by Berkut riot police and Interior Ministry forces on Maidan on Feb 18, 2014.

HromadskeTV journalist Anastasia Stanko told Open Russia that she is not in the least surprised that Fedchuk should have turned up in the Russian police with whom he may well have had good ties.  “After all, he knows well how to be in charge of beating people up and organizing acts of provocation”.  And he knows that he faces criminal prosecution in Ukraine.

Stanko was asked whether she thinks many police were prepared to go and serve another country’s police force.  Her answer now, she suggests, would be different from back in February last year when she had seen only police brutality in the service of the old regime.   What changed was the war in which many police officers, including former Berkut officers, went to fight for Ukraine. “Somewhere inside them a change began”, she says.  Before Slovyansk was liberated in May, there were former members of the Maidan Self-Defence fighting side by side with ex-Berkut officers.  Somehow they found a common language, “and now if you ask them why they’re here, in the ATO [anti-terrorist operation] zone, they answer “but it’s simple, I gave my oath to the Ukrainian people”.

Yes, there are some ex-Berkut people who fled to Russia or the Crimea and are working there, but the majority, she believes, have changed their position.  Berkut officers had been brainwashed.  One ex-officer, talking to National Guard members who had been on Maidan, told them: “They kept telling us that you were the dregs of society, whereas you are warriors”.

Against them are what she estimates as up to one thousand members of the enforcement bodies under ex-President Viktor Yanukovych who may have fled to Russia.   A considerable number – perhaps 10 percent – went to the Crimea after Russia’s invasion, and, of course, there are also some who are fighting with the Kremlin-backed militants of the so-called Donetsk and Luhansk ‘people’s republics’.

Of the people at the top under Yanukovych, most are believed to be in hiding in Russia.  In fact over the last week it has been learned that ex-Interior Minister Vitaly Zakharchenko has taken Russian citizenship as well as a job in Russian Technologies, a state structure headed by a close associate of Russian President Vladimir Putin.  Zakharchenko is accused by Ukraine of crimes against humanity in connection with the gunning down of unarmed protesters on Feb 20, 2014.  The charges are no less serious against others, including Yanukovych and fugitive ex-Prosecutor General Viktor Pshonka, to whom the Kremlin has seen fit to provide shelter.