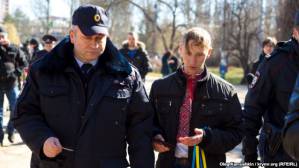 Two of the people sentenced by a Simferopol court on March 13 for a Ukrainian flag and ribbons proved that they would not be cowered on Saturday.  Leonid Kuzmin and Oleksandr Kravchenko were detained in Shevchenko Park on Saturday, with Kravchenko wearing the same Ukrainian ribbons (in blue and yellow).  Kuzmin does not appear to have been dressed in or holding anything that could be deemed ‘prohibited’, so presumably his behaviour in walking up to the monument to Taras Shevchenko to talk with journalists was considered seditious behaviour.

It is not clear whether the court ruling on March 13 gave the enforcement officers the idea that any demonstrations of Ukrainian identity had been prohibited, or whether to come out after being sentenced was viewed as ‘extremism’.  Kravchenko and Kuzmin were taken to the Centre for Countering Extremism after being stopped by police and the so-called ‘self-defence’ paramilitaries which the occupation regime has used to crush dissent since Russian soldiers seized control.  They were  released several hours later with ‘only’ a warning which, as Kravchenko puts it, said that they should “behave well”.

As reported, despite the lack of any legal justification, the organizer and two participants in a totally peaceful gathering to mark the 201st anniversary of the birth of Ukrainian poet Taras Shevchenko were detained on March 9.  On Friday a court effectively agreed that a Ukrainian flag and ribbons are ‘prohibited symbols’ in Russian-occupied Crimea and sentenced Kuzmin, Kravchenko and Veldar Shukurdzhiyev to 40 hours community work.  Crimean Court Finds Ukrainian Flag a “Prohibited Symbol”

It is an ominous, though not unexpected, development that the two men were taken to the Centre for Countering Extremism.  As reported here, Russia’s notoriously broad legislation on ‘extremism’ has been increasingly used over the years against any dissident voices, and nowhere more so than in Crimea under Russian occupation.