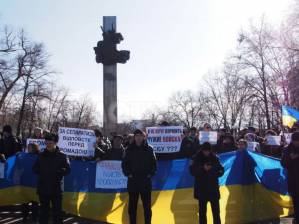 Both Lithuania and Ukraine have reacted with outrage at the refusal by the Organization for Security and Cooperation in Europe (OSCE) to hold an exhibition on March 19, marking the first year of Russia’s occupation of Crimea.   This refusal comes some six months after a Russian propaganda exhibition was held throughout OSCE conferences in Warsaw.

In its statement, the Lithuanian Foreign Ministry expresses surprise “that the OSCE Presidency of Serbia and the OSCE leaders did not permit such a display in the organization, which aims at protection of human rights and the standards of democracy and rule of law. This is the first time in the history of the OSCE when the exhibition intended to draw attention to the severe human rights violations is prohibited. By preventing the display of the pictures, a large part of the population of Crimea cannot tell their story about the occupation of the peninsula, in the OSCE headquarters.”

The Lithuanian Ambassador Čekuolis is quoted as pointing out that the OSCE cannot “be taken hostage” by the wishes of one delegation, namely Russia, and stressed that “discussion about Russia‘s crimes against Ukraine should be open and uncensored”.

The exhibition, which was put together by the Lithuanian and Ukrainian OSCE delegations, was aimed at drawing the attention of OSCE representatives to the illegal occupation and annexation of Crimea and related human rights violations.

Ukraine’s Foreign Ministry has also expressed “disappointment” over the decision by the OSCE Presidency of Serbia and the OSCE Secretary General to cancel the exhibition planned for March 19.

It points out that such exhibitions are a standard practice at all OSCE events, and that all recommendations from the Serbian Presidency were taken into account in preparing it.

The Serbian Foreign Ministry does not have any comment on its site but was reported by the Radio Svoboda Crimean Service to have claimed that the exhibition had only been postponed, though could not say for how long.  Its press secretary, Marina Markovich stated that “all exhibitions at the OSCE headquarters have been postponed until further announcement due to the need for consultations with member states”

What consultations and with which member states?

The questions are, unfortunately, rhetorical, but it is baffling that Russia’s wishes in this matter should have taken precedence over the obvious relevance of this exhibition marking the first anniversary of Russia’s annexation of Crimea.

It should be stressed that widespread human rights violations over the last year in Crimea have been reported by, among others, the Council of Europe’s Human Rights Commissioner; Human Rights Watch and Amnesty International.

Veteran Crimean Tatar leader Mustafa Dzhemiliev and the head of the Mejlis, or Crimean Tatar representative assembly have addressed the UN, the EU and European Parliament, providing documented evidence of grave infringements of Crimean Tatar rights.

If there were factual mistakes in any of the material exhibited, then they should have been pointed out.  The fact that the aggressor is unlikely to wish abuses to be mentioned and words like invasion and occupation to be used is no justification.

The action is especially inappropriate considering an overtly anti-Ukrainian exhibition at the OSCE conferences held at the Sofitel Hotel in Warsaw in September 2014 entitled: Ukraine: Beyond the Red Line.  That exhibition was paid for by the Russian Embassy in Poland and aroused considerable anger for its extremely slanted presentation of events.  All captions, for example, blamed the Ukrainian army for death and destruction.

It is no accident that Ukraine cooperated in producing this exhibition with Lithuania, one of Russia’s other neighbours who has bitter experience of occupation and every reason to show solidarity with those facing aggression from a stronger neighbour.

Willingness to bow to pressure from an aggressor state has led to tragic consequences for all of Europe in the last century.  Compared with other moral failures from the West over the past year, a cancelled exhibition may not rank high, but it is nonetheless a disturbing and dangerous betrayal.