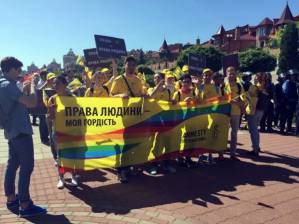 Gay Alliance announced on Saturday evening that it is collecting money to help the police officer most gravely injured while protecting members of the Equality March from far-right thugs earlier in the day.  Anton Gerashchenko, adviser to the Interior Minister reported on Saturday evening that the officer, identified only as Roman, is on a life support machine after undergoing an operation on a burst artery.  The injury, he says, was caused by an exploding fire cracker, spiked with glass and other items clearly aimed at causing maximum injury.  It was thanks to the swift action of Red Cross volunteers and people on the march with medical training that the officer did not bleed to death   Zoryan Kis, from Amnesty International in Ukraine, he mentions, has also called for donations, with some 10 thousand UAH having been collected already.

In its statement Gay Alliance expressed its gratitude to the Kyiv Police “whose officers are worthy of all praise and managed to provide proper protection for participants in the Equality March from radicals”. 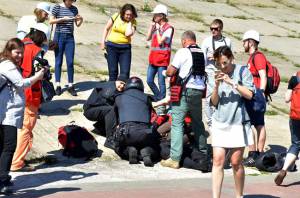 As reported, five police officers were injured during Saturday’s Equality March and 10 participants in the march were injured when attacked by masked thugs, presumed to have been from the same far-right parties, after they moved away.  Some 1500 police and National Guard soldiers were deployed to protect the participants (around 200) of the actual march.  While recognizing the efforts taken by the police on Saturday, Amnesty International in Ukraine was still critical of the authorities, saying that they had not taken sufficient measures to ensure the activists’ safety after the march dispersed.

The march took place along the Obolon Embankment in Kyiv, and the roughly 30 people detained were those attacking or suspected of planning attacks on the marchers.  If the far-right activists proved as violently homophobic as threatened, the police demonstrated that they can work to protect people exercising their constitutional rights.

According to Radio Svoboda, no marchers were injured during the event, though the attack by anti-LGBT activists began almost immediately with the assailants using tear gas, smoke bombs, at least some fire crackers spiked to cause real injuries, as well as hurling abuse.  The police responded immediately, creating a cordon between the activists and their assailants.  In the ensuing scuffle, three police officers were injured, with one, as mentioned, suffering a severed artery and now in grave condition. .

It is possible that the clear statement from President Petro Poroshenko on Friday that Ukrainians were demonstrating their constitutional rights by taking part in the march was instrumental in ensuring that the march itself passed without serious incidents, though that may in fact be thanks only to the absolutely stringent measures of security among activists with people only told where to convene shortly before the march was to begin.  Poroshenko's position, however, could well have prevented attempts by the authorities to prevent it.  Kyiv Mayor Vitaly Klitschko had not tried to have the march banned, but he did respond to the open threats by Right Sector and other far-right activists by suggesting that the organizers cancel the march.

The threats and the failure by the authorities to promise adequate measures of protection resulted in plans last year to hold a similar march being abandoned at the last minute.  This time, however, the police outnumbered the far-right activists and prevented the disruption, not the event.  Given those numbers, it is frustrating that proper escorts were not provided to ensure participants' safety after the march ended.

More too is needed than merely efforts to keep assailants at a distance..  Right Sector had openly called on Klitschko to apply for a court ban, with the movement and its leader Dmytro Yarosh making entirely unequivocal threats of violence against those who took part.

There have been similar threats made by far-right organizations linked with Right Sector recently, and homophobic remarks by at least one other MP, Volodymyr Parasyuk  (see: United in Homophobic Bigotry: Right Sector echoes Russian anti-LGBT line  ).

The threats almost succeeded yet again in preventing the event from taking place.  While very promising that the police have proven that they can protect activists, there are surely other lessons to be learned.  There are laws in Ukraine against incitement to violence, as well as against those who demonstrate that their threats should be taken seriously.

It is surely time for their threats to receive proper attention from the law enforcement bodies and courts.