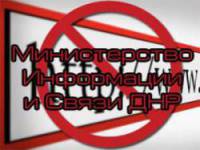 Kremlin-backed militants in Donbas have forced the local Internet provider to block 39 websites, including the main media writing openly about Russian military involvement in the war in Donbas, opposition, etc.  The news coincided with the by the so-called ‘Donetsk and Luhansk people’s republics’ [‘DPR’ and ‘LPR’] that they propose “special status” as integral parts of Ukraine.  This would be extremely special status since Ukraine’s Constitution specifically prohibits censorship and Internet sites may only be blocked by court order.

The list has in fact only been from the 27 sites blocked in September 2014.  The same provider then a letter from the ‘DPR Ministry of Information’ saying that it was taking measures to “prevent incitement to inter-ethnic enmity and circulation of knowingly false information and slander” and listing the sites it wanted blocked.  ‘Demanded’ would be a better term since the provider was told that the “case will be handed to DPR law enforcement bodies” should they not comply.

The new sites deemed to be ‘inciting inter-ethnic enmity’ and engaging in “slander” include Radio Svoboda, Informator.lg.ua, Liga.net and others (see below).  Any of these are likely to post information, for example, about Maria Varfolomeyeva, the Luhansk journalist held by militants for over 5 months; about reports such as compiled by slain Russian politician  Boris Nemtsov’s associates and one recently published about religious persecution in militant-controlled Donbas.

A number of the journalists working for the blocked sites are, in fact, from Donbas but were driven out of the area through threats or direct attacks. IMI’s monitoring in 2014 reported at least 34 attacks on media in Donbas that refused to cooperate with the self-styled ‘republics’.  Some were also held hostage for considerable periods of time, and Maria Varfolomeyeva remains imprisoned and tormented for Russian propaganda channels.

For those uninterested in politics, but in danger of confronting hard facts and armed militants on the rampage on a daily basis, there are still publications which provide Soviet-style escape from reality. 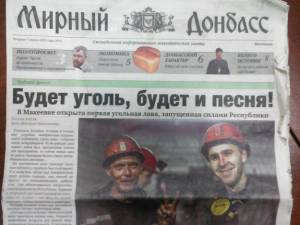 Iryna Chulivska from the Institute for Mass Information has been monitoring the printed press still available in militant-occupied Donbas.  She the official paper of the ‘DPR and LPR People’s Soviets “Peaceful Donbas”

If you immerse yourself in its pages, she says, you can imagine you’re in a wonderful country where everything is fabulous, unlike the terrible life in ‘fascist Ukraine’.

“In a nutshell, the main message of the press currently available on Donetsk is that “in Ukraine everything’s bad, and in the ‘Republic’ – it’s good.  And in Russia everything’s also good, and therefore the ‘Republic’ can look forward to a glorious future”.

All very much in the style of President Vladimir Putin’s Russia: the same attacks on journalists, blocking or forced closure of independent media, and use of terror and intimidation to silence critics.

Only the Donbas militants have now received orders to envisage all of that as part of their ‘special status’ within Ukraine, and that now is much more problematical.