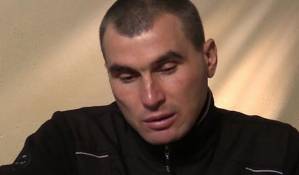 Ukrainian Serhiy Litvinov crossed the border into Russia because of a toothache and found himself taken into a forest and tortured until he confessed to multiple crimes, all against “unidentified people”.  He was displayed by the Russian Investigative Committee as ‘proof’ of their allegations of Ukraine’s “genocide of the Russian-speaking population in Donbas and illegal warfare, and has been held in Russian detention for almost a year.  Although the charges were recently reduced to almost nothing after a proper lawyer was taken on, there is no indication that he will be released or that his credible allegations of torture are being investigated.

Litvinov, a 32-year-old cowherd from the village of Komyshne in Ukraine’s Luhansk oblast, near the Ukrainian-Russian border, was arrested on Aug 22, 2014 in Rostov oblast (Russia) and taken to Moscow. He was charged as part of the huge ‘Ukrainian file’ together with Nadiya Savchenko, Ukraine’s Interior Minister Arsen Avakov; the then Dnipropetrovsk Governor Igor Kolomoisky and others.

Just before the announcement of Litvinov’s alleged crimes, Vladimir Markin from the Investigative Committee [IC] informed of a criminal case against unidentified representatives of Ukraine’s leadership, armed forces, the National Guard and Right Sector. They were accused of having “issued orders aimed at the total annihilation of specifically Russian-speaking citizens living on the territory of the Donetsk and Luhansk republics”.

That announcement has been quietly removed from the IC site, probably due to the incredulous mirth it aroused. Markin was clearly peeved by such a response which he mentions in his report about Litvinov’s arrest.  He begins this report with claims that Ukraine is following a deliberate plan to kill the population of Donbas, and that the victims’ “fault lies merely in the fact that they spoke Russian and did not want to descend into nationalist hysteria and allow fascist ideology in their native land”.

“The character and style of the murders carried out by the National Guard and Right Sector resemble other similar crimes which the Dnipro Battalion Private Serhiy Litvinov describes in detail in his testimony.”

Markin clearly anticipates assertions that Litvinov was abducted like Nadiya Savchenko, and gives the only truthful detail in his whole account, namely that the 32-year-old entered Russia voluntarily, to go to a hospital in the Rostov oblast.

Litvinov allegedly confessed to personally carrying out murders of civilians, including women and children on the basis solely of anonymous denunciations. “And what is most interesting, for committing murders, this fighter received remuneration, issued by the management from Igor Kolomoisky’s money.”

It is not only the crimes that are fictitious.  Litvinov was not in the Dnipro volunteer battalion, as confirmed not only at higher levels, but by his wife who, until August last year, saw her husband every day.  He has never even done military service, due to various medical issues.  Human rights activist Zoya Svetova writes that the Litvinov case demonstrates that the Russian authorities have learned to manipulate people’s consciousness not only on the television screen, but through the material in criminal files.

The charge laid is under Article 356 § 1 “brutal treatment of the civilian population, as well as the use in armed conflict of means and methods prohibited by the Geneva Convention on the protection of the civil population during war”.

The charges were until quite recently those also laid against Nadiya Savchenko, leading to such oddities as the claim that they had interrogated 108 thousand people in her case.

Litvinov has told his story to the Ukrainian consul, and two human rights activists Zoya Svetova and Yelena Masyuk.  Their accounts differs only in degree of detail, though Svetova also reports some odd confusion in later statements, probably indicating pressure being brought to bear on him by the investigators.

He told them that in August he had a severely inflamed tooth and was told he needed an operation.  Since there was nobody who could do it in the village, he went across the border to the hospital in the Rostov oblast, as people living in the border area often do.

He was operated on immediately, and then told he should recuperate for 10 days.  There were wounded militants from the self-proclaimed ‘Luhansk people’s republic’ also receiving Russian medical treatment in the same ward as him.  He says it was they who decided he was a Dnipro Battalion soldier and soon three men in camouflage gear and masks turned up.  He was taken with a bag over his head and in handcuffs to a forest beaten and tortured.  He says that they suspended him from a tree and connected an electric current to his arms and legs; fired shots next to his ear; and slashed his thigh with a knife, as well as hitting him in the chest, stomach and around the head. Litvinov says that the one who seemed in charge - nicknamed ‘Chechen’ - threatened to hang a rock around his neck and throw him in the river, “but the others didn’t let him do it”. He confessed to whatever they demanded – first to killing three young woman, then twenty people ...

He was returned to the hospital to be cleaned up, but then the next day taken to the Department for Fighting Organized Crime, where he was also beaten mercilessly.  The men beating him did not hide their faces, and he saw one of them in the court during the detention hearing.  He tried to inform the court of this, but the judge didn’t want to know.

Back in April Litvinov complained to Masyuk that the state-appointed lawyer was “against him”, and in no way representing his interests.  Svetova reports that a well-known lawyer Viktor Parshutkin agreed to take on the case not long after that.  Parshutkin appears to have dealt admirably with all the mass killings, rape, etc. of ‘unidentified individuals’ which Litvinov was supposed to have committed.  Ten months after being arrested and charged with terrorism, mass killings, and illegal warfare, he now stands accused of robbery with respect to one Russian citizen.  Whether unidentified remains to be seen.