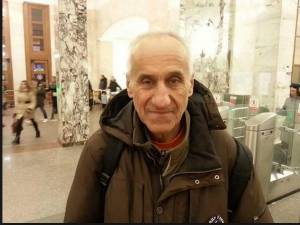 The trial has begun in Moscow of Vladimir Ionov who is facing criminal charges over supposed administrative infringements during peaceful protests.  The 75-year-old civic activist is the first person to be tried under a new article of the Criminal Code which envisages up to 5-year sentences if a court has issued three rulings on administrative offences within 180 days.  It is quite standard in today’s Russia for police to detain people at entirely peaceful protests, with administrative protocols then drawn up and processed by the courts with no questions asked.   Three such unwarranted administrative penalties can now lead to criminal prosecution.

At the hearing on Sept 17, the judge asked Vladimir Ionov if he understood what he is accused of.  His response was succinct: “It’s impossible to understand”.  His lawyer Olga Chavdar said that she also doesn’t understand the charges against Ionov and calls them unlawful.   The court hearing appears to have ended on that point and is set to resume on Oct 2.

Four people are now facing criminal proceedings under Article 212.1 of the Russian Criminal Code.  As reported, the charges against Ionov and against civic activist Mark Galperin were initiated on Jan 16.  On Jan 30 the same charges were brought against Ildar Dadin, who was placed under house arrest for two months. Irina Kalmykova has since been charged as well, however none of the other cases have yet reached the court.

The authoritative Memorial Human Rights Centre responded to the first wave of such cases by declaring Ildar Dadin to be a political prisoner, and stating that the charges against Ionov and Galperin were politically motivated.

The final indictment against Ionov was issued on July 10.  He is accused of four episodes: a single-person picket on Jan 10 with a placard: “Je suis Charlie” [this was just after the massacre at Charlie Hebdo in Paris]; taking part in gatherings on Jan 15 and on March 21, as well as participation in a picket in support of Nadiya Savchenko on May 11 (the imprisoned Ukrainian MP’s birthday). 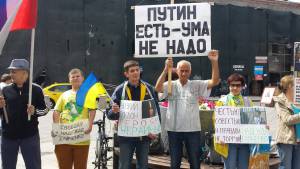 Vladimir Ionov’s placard reads: "We have Putin, no need for a mind"

On July 10 the investigator offered to terminate the case under the amnesty for the 70th anniversary of Victory over Nazi Germany.  Vladimir Ionov refused and stated that he planned to demonstrate his innocence in court.

The legislative amendments from July 2014, and particularly the threat of criminal prosecution are clearly attempts to stifle civic protest.   The Memorial HRC stated on Feb 4 that the new legislation destroys freedom of peaceful assembly in Russia.

Of particular concern here is the way the ‘offences’ are effectively manufactured.  Both Ionov and Galperin are accused over single-person pickets which do not require authorization.  A standard form of provocation is to have someone go up to the picketers, and refuse to go away.  The police immediately turn up and detain both (the provocateur only nominally) for ‘holding an unsanctioned meeting’.

All of these tactics were used in Soviet times and it is immensely disturbing that they have been reinstated so many years after the USSR collapsed.