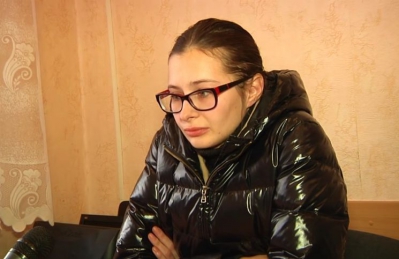 Kremlin-backed militants in the Luhansk oblast had promised to release 31-year-old Maria Varfolomeyeva on Feb 26, but yet again failed to do so.  The Luhansk journalist who has been held hostage since for 13 months is said to be in a very bad physical and psychological state.

An exchange did take place near Shchastya with three prisoners held by the so-called ‘Luhansk people’s republic’ exchanged for six returned to the militants.  Two civilian hostages – Leonid Mazenko and Vitaly Chuprinin – were released, together with one soldier – Rostislav Mavrin.  All had been held in captivity for over 6 months.

It was certainly anticipated that Varfolomeyeva would be released, and no reason was provided for why she had not been included.  The prisoners who were free had seen the young woman the day before, and say that she is looking very bad, weighing only around 30 kilograms.  She is being held in a separate basement cell without any light and by herself.

It is obviously good that at least some exchanges have taken place in recent days, after a period where all were stopped.  If, as seems likely, this is part of efforts to demonstrate compliance with the Minsk Agreement before the Normandy 4 talks on March 3, Russia and the militants who follow Kremlin orders should try harder.  The Minsk Agreement states unequivocally that all hostages and illegally detained persons must be released on an ‘all for all’ basis,

The failure to release Maria Varfolomeyeva is of particular concern since the militants have previously made all kinds of threats about ‘trying’ her on charges ominously similar to those which Russia has brought against Ukrainian former military pilot and MP Nadiya Savchenko.

Varfolomeyeva’s parents are both abroad. Despite the obvious danger to a pro-Ukrainian journalist who had supported the Luhansk Euromaidan, the young woman stayed in the city to care for her elderly grandmother, who died shortly after Maria was taken prisoner.

Although captured at a time when there had been no shelling in Luhansk for several months, the militants claimed that she was taking photos of buildings where militants were staying in order to pass on the coordinates to the Ukrainian military.

An indicator of how trumped up the charges are is demonstrated by the initial RIA Novosti report on Varfolomeyeva’s imprisonment and the militants’ charges.  The government-controlled Russian agency states that Leonid Pasechnyk, ‘LNR minister of state security’ says that the young journalist is facing up to 15 years imprisonment and continues as follows: “On 27 January 2015 Luhansk was subjected to the latest shelling.  According to the investigators, Varfolomeyeva passed the coordinates for shelling to the Ukrainian military.”

Maria Varfolomeyeva had been held prisoner for 19 days by that time, however RIA Novosti reports only Pasechnyk’s claim that Varfolomeyeva’s “guilt has been fully proven”.  As ‘proof’ of Varfolomeyeva’s guilt, Pasechnik produced a photograph of the journalist holding a Right Sector business card which they found on her social network account.

Both the militants and the pro-Kremlin Life News TV channel clearly view the young journalist as something of a ‘trophy’.  She was heard on video being tormented by militants back in February and then in May Life News came up with a carefully doctored interview.  Varfolomeyeva’s obvious distress during the interview and difficulty speaking made it easy for Life News to add their version of the journalist’s supposedly changed attitude towards Ukrainian volunteer fighters.

The LifeNews headline claimed that the volunteer battalions Aidar and ‘Right Sector’ had “abandoned their spy captured by the insurgents”.   The reporters assert that that she herself has had time to “change her attitude to the Ukrainian nationalist battalions”, although the remarks claimed are not on the tape.  At the end of this recording, the journalist makes an emotional plea to her government to help bring about her release or exchange.  It is quite clear that she denies any of the allegations made against her.

There have been appeals from both Ukrainian journalist organizations and Reporters without Borders for Varfolomeyeva’s release, as well as from western officials.