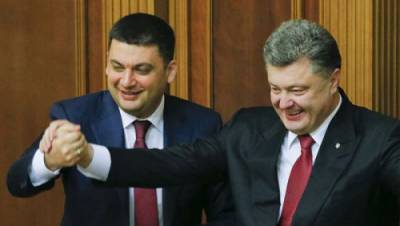 Ukraine’s Central Election Commission has complied with a highly contentious move by the bloc of Petro Poroshenko [BPP] and has stripped two Ukrainian MPs of their mandate.  The move is especially chilling as one of the MPs Yehor Firsov had left the faction in protest at what he called corruption among the leadership.  Even without real concerns about the motives, removal  of MPs merely for leaving their faction is of questionable legality and uses a norm that has been seriously criticized as a threat to democratic principles by the Council of Europe’s Venice Commission.

Mykola Tomenko, a long-term MP, announced his plan to leave the bloc at the end of last year in protest at the adoption of the state budget and his formal statement was read out to parliament at the beginning of February.

Yehor Firsov is the head of the Udar party in the Donetsk oblast, and was against his party merging with BPP.  Although he formally announced his withdrawal from the bloc on March 15, he had first written of his decision in a blog on Feb 8.  He wrote that he could no longer stay in the same party as Ihor Kononenko, and was not willing to provide a cover for what he called Kononenko’s “corrupt activities”.  He believes that most members of the faction are willing to conceal the corrupt dealing of the “new family” and do so even when Ukrainian journalists and western partners talk openly about the corruption.

Firsov’s statement came only 5 days after a key reformer Aivaras Abromavicius announced his resignation from his post as Ministry of Economic Development and Trade.  At a press conference, Abromavicius explained that his team did not wish “to be a cover for open corruption or puppets for those who want to establish control over state funds in the old fashion."  He specifically pointed to Kononenko.

At the end of March, Kononenko remains one of the leaders of the faction and Tomenko and Firsov have been removed from parliament in a blitzkrieg operation.

Oleksiy Koshel, head of the Committee of Voters of Ukraine [CVU] pointed to the “extraordinary speed” all of this was happening in an interview given to Deutsche Welle.  The decision was taken at a faction congress behind closed doors on March 25, and by March 28 the Central Election Commission had already stripped them of their mandate.

The same congress had ‘cleaned up’ the candidate list, he says, on the basis of the ‘Law on Party Dictatorship’, otherwise known as Law No. 3700  As reported, this law allows for a candidate in a multi-mandate electoral district to be removed from the candidate list after the election results have been announced, if the decision is taken by a party congress.  Calls for the bill to be rejected, and then for Poroshenko to veto it, were made by Ukraine’s main election watchdogs, civic reform initiatives and observers.  All were ignored (see: Forget the Voters: Ukraine’s Leaders Bring in ‘Party Dictatorship’).

One of the concerns regarding that law applies just as much to the latest moves.  In demanding the right to adjust the candidate lists after the elections have taken place and by removing elected representatives, the faction – and Central Election Commission [CEC]  – are showing contempt for the will of the voters.

CEC cites article 81 of the Constitution which does indeed state that an MP’s mandate can be cancelled if they leave the faction that they were in when elected to parliament.

The first issue here is that the article speaks of this being “in accordance with the law”, and no such law has ever been passed.  This point is contentious, but so too is the specific article and the fact that it is even in the Constitution.  The so-called ‘imperative was added in 2004 during controversial amendments to the Constitution passed together with another ordinary law on elections during the so-called ‘Orange Revolution’.  It has, unfortunately, remained in the Constitution despite damning criticism from the Venice Commission.

There have been times over the last decade when the Assembly’s rejection of any restrictions on MPs’ freedom was difficult to reconcile with Ukrainian reality.  When Viktor Yanukovych became President in 2010, for example, his party immediately changed the post-election balance of power by finding enough MPs willing to take bribes to change sides.  This too can be seen as betrayal of the will of the voters.

Perhaps that is why MPs were in no hurry to remove a norm so damningly criticised by the Venice Commission and PACE.

Or, unfortunately, they believed it might come in handy.  The fact that all faction leaders and a parliamentary majority believed it acceptable to adjust candidate lists after the voters have made their choice is already profoundly disturbing.  It should be stressed that there is nothing in the law specifying which grounds are acceptable for such changes.

Under Yanukovych a few MPs were stripped of their mandate.  The reasons varied, but nobody seriously suggested that there was anything but a political motive.

In formal terms, the situation in March 2016 is different.  MPs, after all, from any party know what they mustn’t do if they want to hold on to their electoral mandate.

It’s what that means they must silently accept or be thrown out that is really worrying.